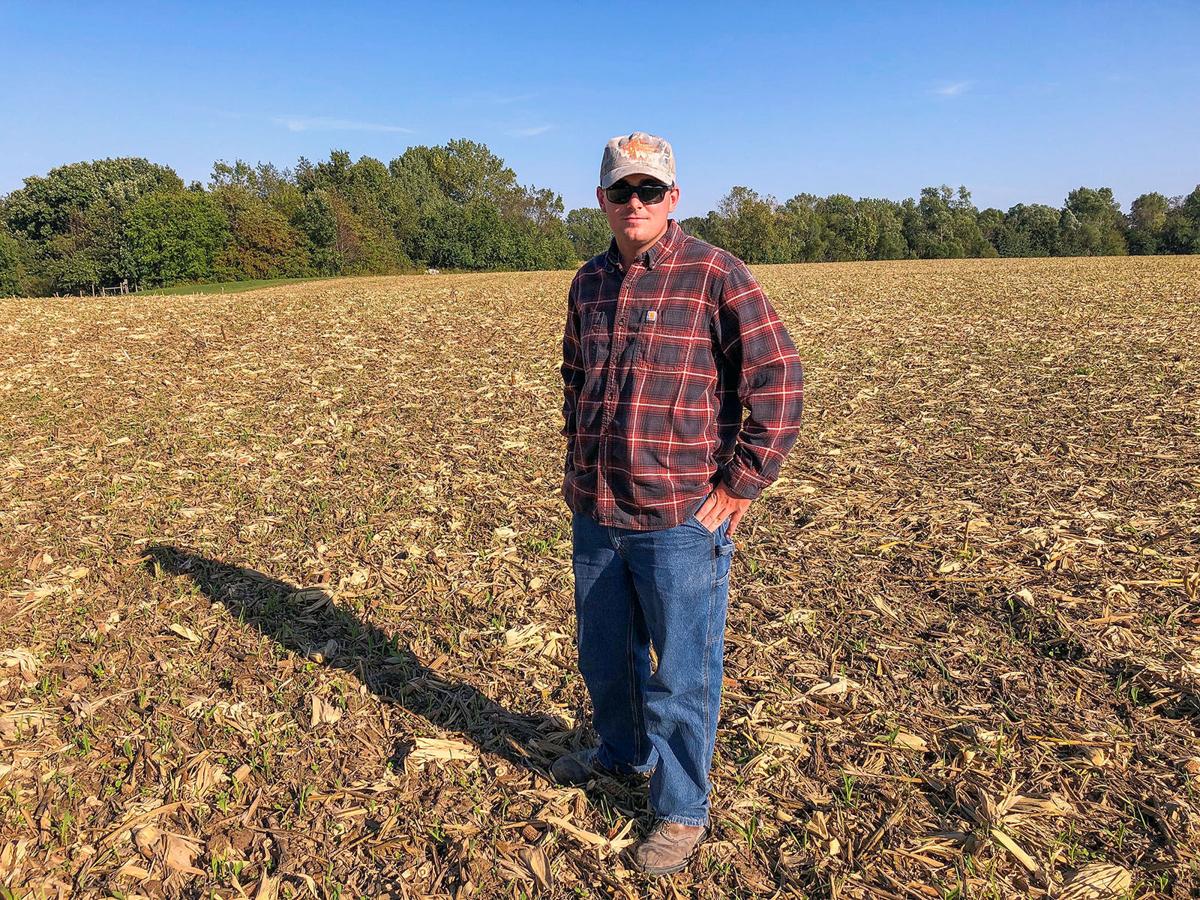 Aidan Groves, Macoupin County, poses in a field recently seeded to a cover crop through the Precision Conservation Management program. He uses a mix of oats, tuwrnips and rye grass among others. (Photo by Daniel Grant) 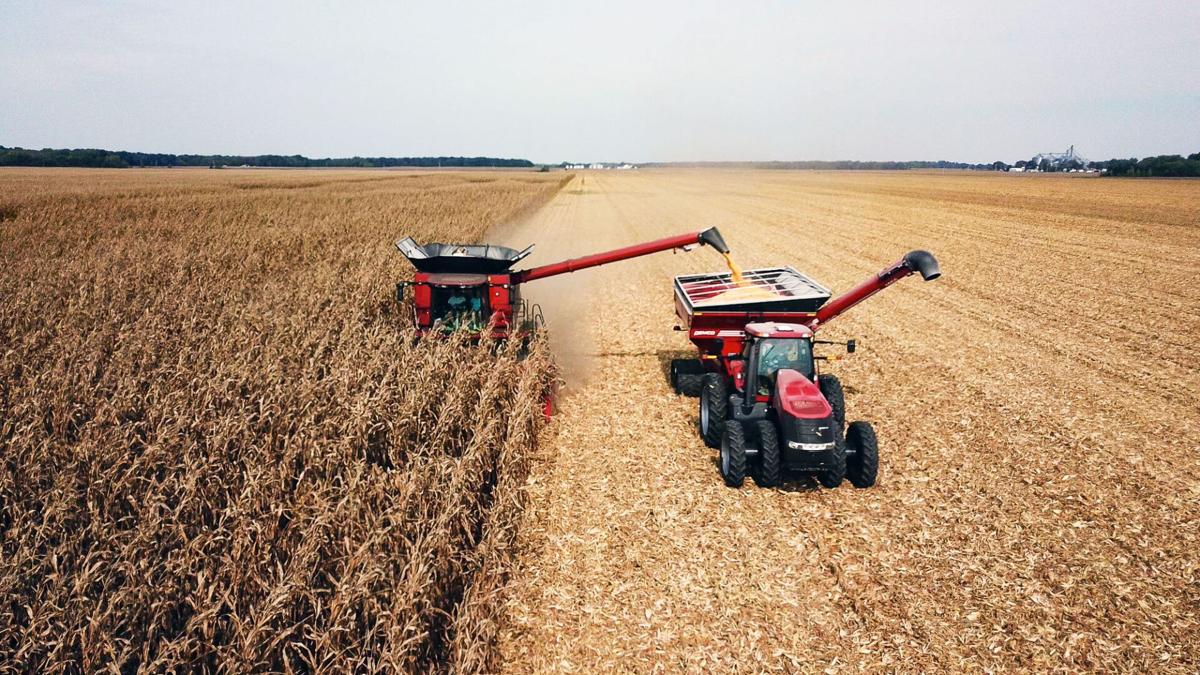 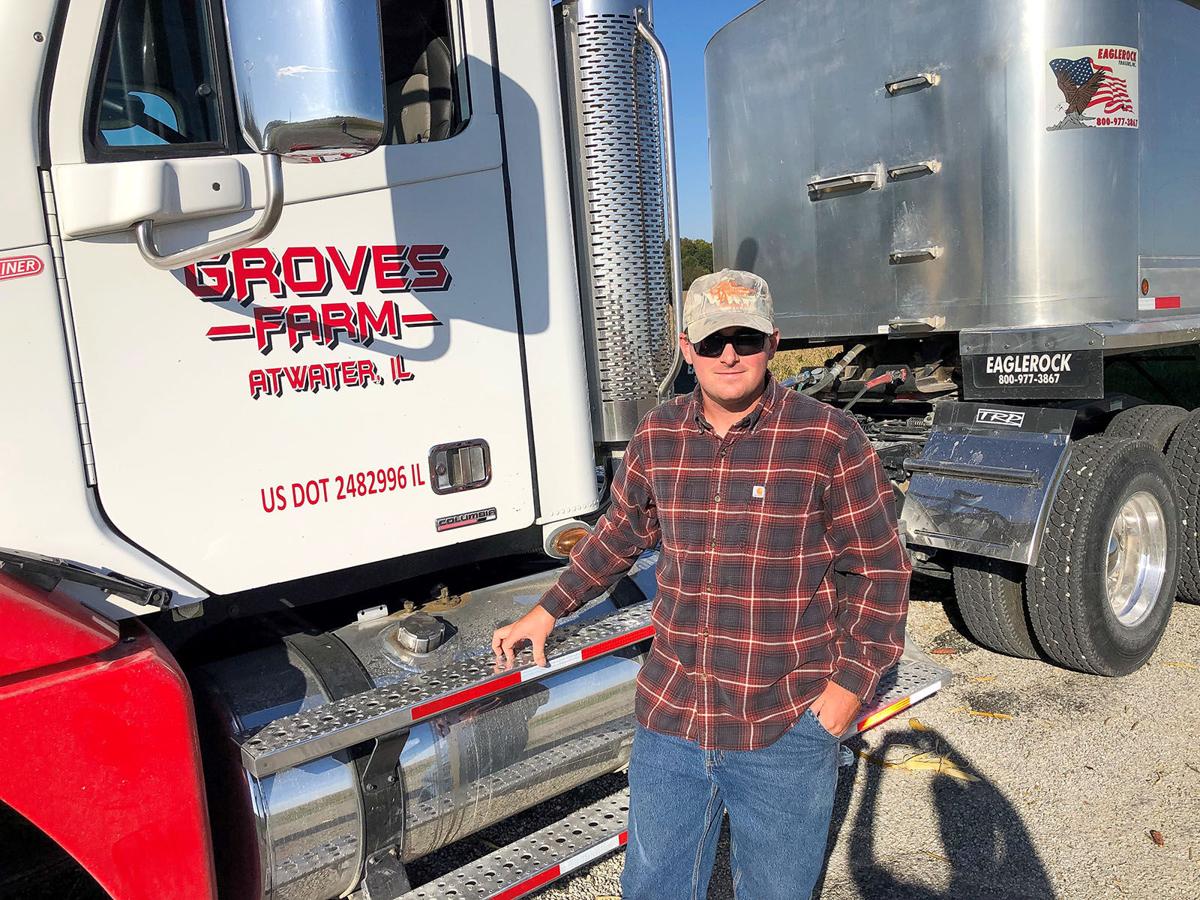 Aidan Groves poses near his truck while hauling corn from a field in Macoupin County. Much of their crops end up in the export market via the river and local rail system. (Photo by Daniel Grant)

Aidan Groves, Macoupin County, poses in a field recently seeded to a cover crop through the Precision Conservation Management program. He uses a mix of oats, tuwrnips and rye grass among others. (Photo by Daniel Grant)

The past year has been eventful for Macoupin County Farm Bureau Young Leader Aidan Groves, who left a job in agribusiness and returned to his family’s farm full time about this time a year ago.

Groves’ return marked the realization of his goal from the time he left the Atwater area to attend Purdue University, which was followed by an off-farm job upon graduation at Cargill in St. Louis.

“I always wanted to farm, but I wanted to learn that (business) side of the industry,” Groves said while harvesting corn on a breezy October afternoon. “Being back here on the farm is the realization of what I knew I was going to do forever.”

Groves, a Macoupin County Young Leader, farms with his father, Kevin. They grow corn, soybeans, wheat and alfalfa to sell as hay on a farm that dates back to the pre-Civil War era in their family.

“Mom (Beth Groves) researched it and our farm goes back to 1835. We’ve farmed the same 40 since then,” Aidan said. “The farm started to change in the mid-1950s when Grandpa John got out of the service. He always said he had one of the first tired tractors in the area, and we still have the bill of sale to prove it.”

The Groves continued to adopt new technology on the farm over the years and recently got involved with cover crop research through Precision Conservation Management (PCM).

They’re currently on year three of a five-year transition program in which they converted half their farm to the use of cover crops and half without, to generate comparisons and field data through PCM. They use a mix of clover, turnips, oats and rye grass.

“This year the bean yields have been some of the best we’ve ever had. I think the cover crops helped get the soil working again (through improved organic matter),” Groves said. “On other farms where we’re trying to control erosion, we use rye grass and oats.”

They were about half done with corn harvest and cut about a third of their beans as of Oct. 12.

“Harvest has been slow and steady,” Groves said. “We’ve been fighting rain delays, recently. We had a lot of replanted corn down in this area from the Illinois River to Interstate 55.”

Their location near the river and rail systems leave farmers in that area very dependent on the export market, which has a big impact on local basis levels, Groves noted.

“Here in this area, a lot of our stuff ends up going overseas. We’re very dependent on the Gulf,” he said.

Some of the challenges returning to the farm include a recent spike in production costs along with adjusting to working with family full time.

“Your co-workers are also your family members,” Groves said. “The good thing is dad has a lot of wisdom he’s passing on to me. I just try to take it all in.

“With input prices going up, I’ve been locking in seed and fertilizer prices,” he noted. “It goes back to the thought that corn might be $5, but once other inputs go up, at the end of the day your net income position isn’t much different.”

Groves got involved with Young Leaders in college and was thrilled he and fellow Young Leaders in Macoupin County could host events again this year, including tire and food drives and a kiddy tractor pull and farmer Olympics at the county fair, after a pause last year due to the pandemic.

“We’re trying to do all we can to get out in the county and help where we can,” he added.

Groves volunteered to provide harvest ride-alongs to members of the media this year through a program organized by the Illinois Soybean Association.

Diversity key for Poole to weather storms, or lack thereof, this season