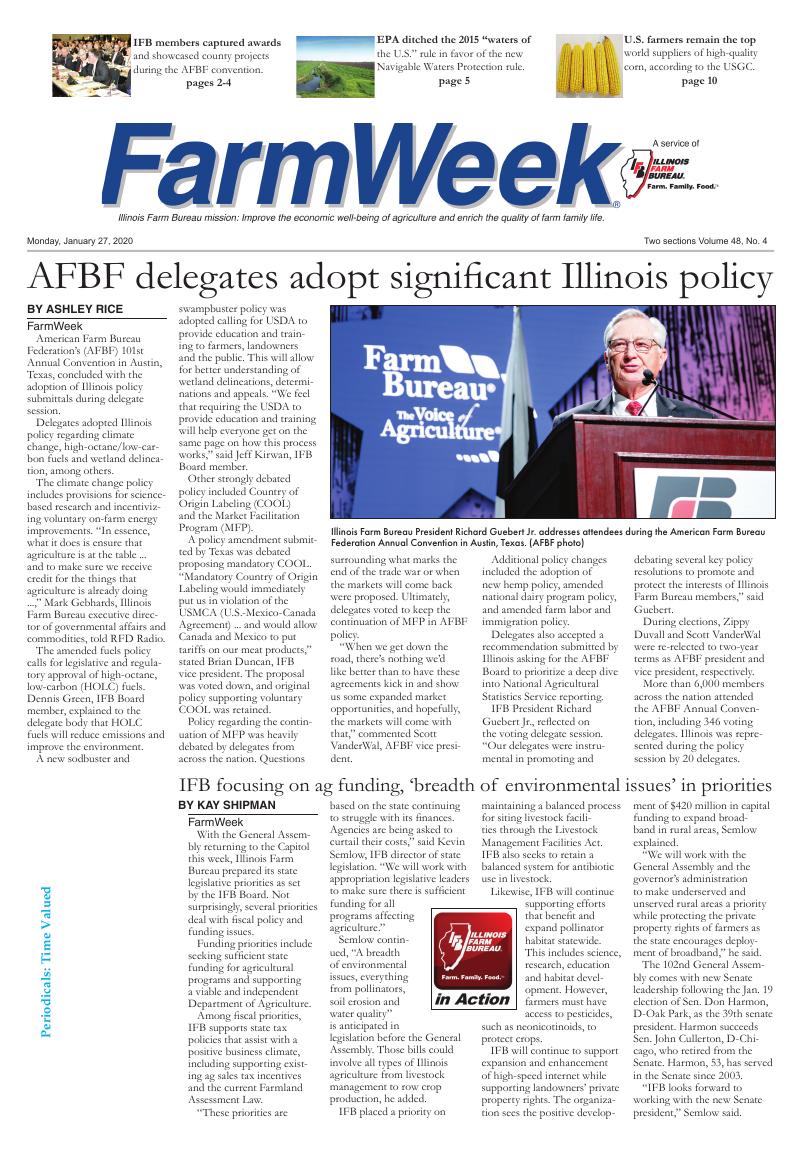 The climate change policy includes provisions for science-based research and incentivizing voluntary on-farm energy improvements. “In essence, what it does is ensure that agriculture is at the table ... and to make sure we receive credit for the things that agriculture is already doing ...,” Mark Gebhards, Illinois Farm Bureau executive director of governmental affairs and commodities, told RFD Radio.

The amended fuels policy calls for legislative and regulatory approval of high-octane, low-carbon (HOLC) fuels. Dennis Green, IFB Board member, explained to the delegate body that HOLC fuels will reduce emissions and improve the environment.

A new sodbuster and swampbuster policy was adopted calling for USDA to provide education and training to farmers, landowners and the public. This will allow for better understanding of wetland delineations, determinations and appeals. “We feel that requiring the USDA to provide education and training will help everyone get on the same page on how this process works,” said Jeff Kirwan, IFB Board member.

A policy amendment submitted by Texas was debated proposing mandatory COOL. “Mandatory Country of Origin Labeling would immediately put us in violation of the USMCA (U.S.-Mexico-Canada Agreement) ... and would allow Canada and Mexico to put tariffs on our meat products,” stated Brian Duncan, IFB vice president. The proposal was voted down, and original policy supporting voluntary COOL was retained.

“When we get down the road, there’s nothing we’d like better than to have these agreements kick in and show us some expanded market opportunities, and hopefully, the markets will come with that,” commented Scott VanderWal, AFBF vice president.

Delegates also accepted a recommendation submitted by Illinois asking for the AFBF Board to prioritize a deep dive into National Agricultural Statistics Service reporting.

During elections, Zippy Duvall and Scott VanderWal were re-relected to two-year terms as AFBF president and vice president, respectively.

More than 6,000 members across the nation attended the AFBF Annual Convention, including 346 voting delegates. Illinois was represented during the policy session by 20 delegates.

With the General Assembly returning to the Capitol this week, Illinois Farm Bureau prepared its state legislative priorities as set by the IFB Board. Not surprisingly, several priorities deal with fiscal policy and funding issues.

Funding priorities include seeking sufficient state funding for agricultural programs and supporting a viable and independent Department of Agriculture.

“These priorities are based on the state continuing to struggle with its finances. Agencies are being asked to curtail their costs,” said Kevin Semlow, IFB director of state legislation. “We will work with appropriation legislative leaders to make sure there is sufficient funding for all programs affecting agriculture.”

Semlow continued, “A breadth of environmental issues, everything from pollinators, soil erosion and water quality” is anticipated in legislation before the General Assembly. Those bills could involve all types of Illinois agriculture from livestock management to row crop production, he added.

IFB placed a priority on maintaining a balanced process for siting livestock facilities through the Livestock Management Facilities Act. IFB also seeks to retain a balanced system for antibiotic use in livestock.

Likewise, IFB will continue supporting efforts that benefit and expand pollinator habitat statewide. This includes science, research, education and habitat development. However, farmers must have access to pesticides, such as neonicotinoids, to protect crops.

IFB will continue to support expansion and enhancement of high-speed internet while supporting landowners’ private property rights. The organization sees the positive development of $420 million in capital funding to expand broadband in rural areas, Semlow explained.

“We will work with the General Assembly and the governor’s administration to make underserved and unserved rural areas a priority while protecting the private property rights of farmers as the state encourages deployment of broadband,” he said.

The 102nd General Assembly comes with new Senate leadership following the Jan. 19 election of Sen. Don Harmon, D-Oak Park, as the 39th senate president. Harmon succeeds Sen. John Cullerton, D-Chicago, who retired from the Senate. Harmon, 53, has served in the Senate since 2003. 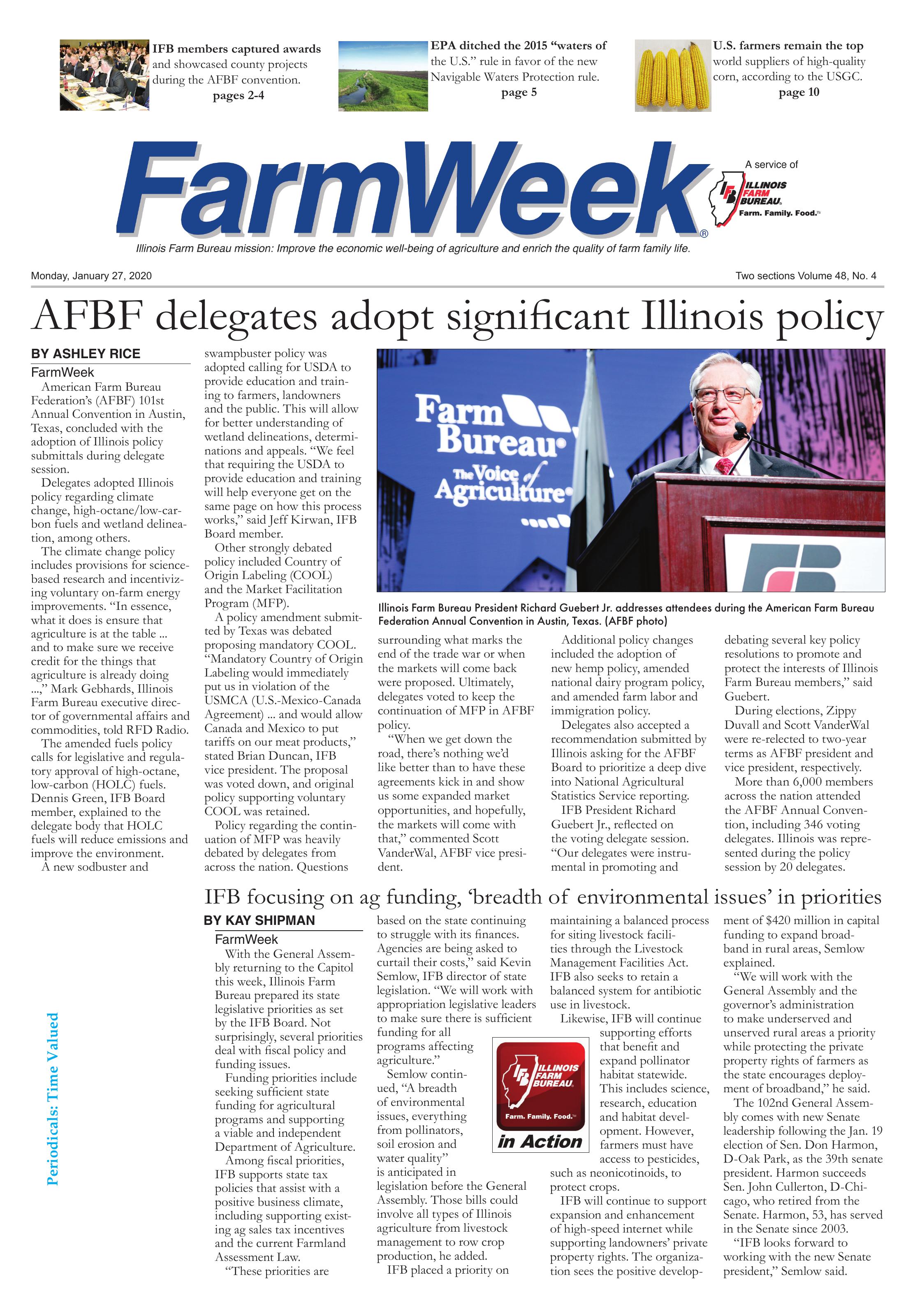