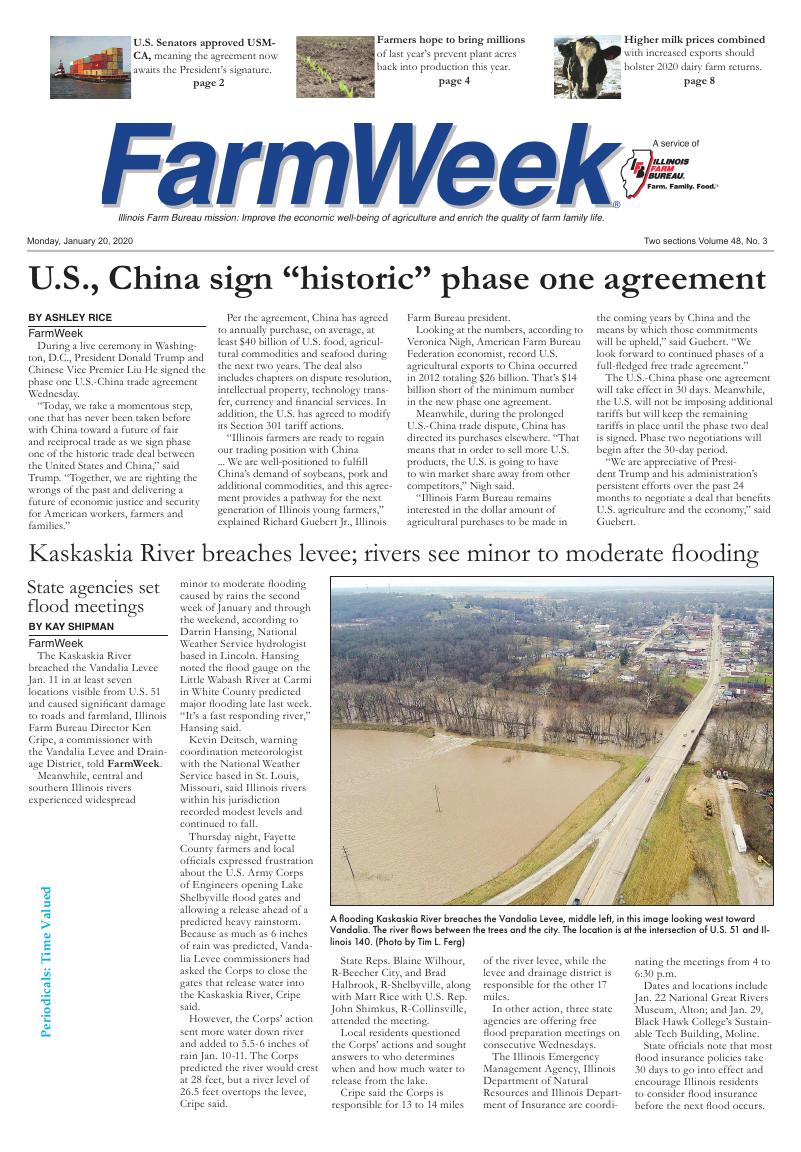 “Today, we take a momentous step, one that has never been taken before with China toward a future of fair and reciprocal trade as we sign phase one of the historic trade deal between the United States and China,” said Trump. “Together, we are righting the wrongs of the past and delivering a future of economic justice and security for American workers, farmers and families.”

Per the agreement, China has agreed to annually purchase, on average, at least $40 billion of U.S. food, agricultural commodities and seafood during the next two years. The deal also includes chapters on dispute resolution, intellectual property, technology transfer, currency and financial services. In addition, the U.S. has agreed to modify its Section 301 tariff actions.

“Illinois farmers are ready to regain our trading position with China ... We are well-positioned to fulfill China’s demand of soybeans, pork and additional commodities, and this agreement provides a pathway for the next generation of Illinois young farmers,” explained Richard Guebert Jr., Illinois Farm Bureau president.

Looking at the numbers, according to Veronica Nigh, American Farm Bureau Federation economist, record U.S. agricultural exports to China occurred in 2012 totaling $26 billion. That’s $14 billion short of the minimum number in the new phase one agreement.

Meanwhile, during the prolonged U.S.-China trade dispute, China has directed its purchases elsewhere. “That means that in order to sell more U.S. products, the U.S. is going to have to win market share away from other competitors,” Nigh said.

“Illinois Farm Bureau remains interested in the dollar amount of agricultural purchases to be made in the coming years by China and the means by which those commitments will be upheld,” said Guebert. “We look forward to continued phases of a full-fledged free trade agreement.”

The U.S.-China phase one agreement will take effect in 30 days. Meanwhile, the U.S. will not be imposing additional tariffs but will keep the remaining tariffs in place until the phase two deal is signed. Phase two negotiations will begin after the 30-day period.

“We are appreciative of President Trump and his administration’s persistent efforts over the past 24 months to negotiate a deal that benefits U.S. agriculture and the economy,” said Guebert.

Thursday night, Fayette County farmers and local officials expressed frustration about the U.S. Army Corps of Engineers opening Lake Shelbyville flood gates and allowing a release ahead of a predicted heavy rainstorm. Because as much as 6 inches of rain was predicted, Vandalia Levee commissioners had asked the Corps to close the gates that release water into the Kaskaskia River, Cripe said.

However, the Corps’ action sent more water down river and added to 5.5-6 inches of rain Jan. 10-11. The Corps predicted the river would crest at 28 feet, but a river level of 26.5 feet overtops the levee, Cripe said.

Local residents questioned the Corps’ actions and sought answers to who determines when and how much water to release from the lake.

State officials note that most flood insurance policies take 30 days to go into effect and encourage Illinois residents to consider flood insurance before the next flood occurs.