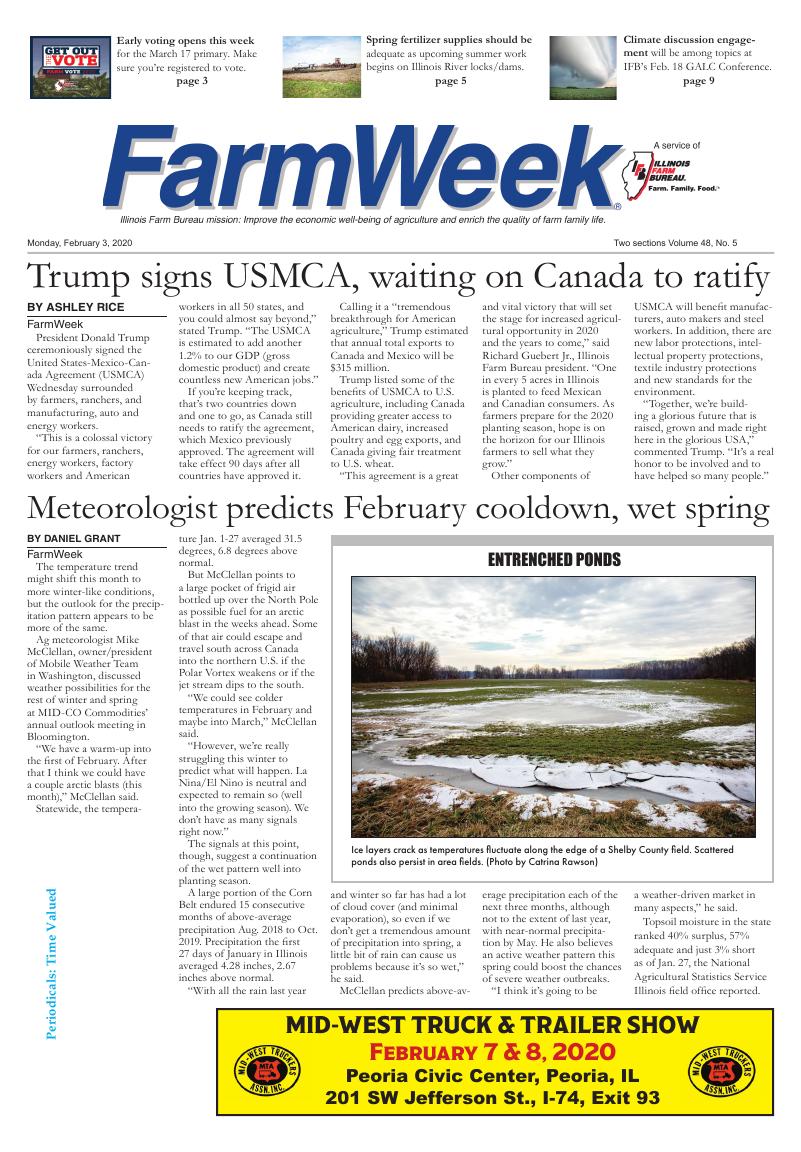 “This is a colossal victory for our farmers, ranchers, energy workers, factory workers and American workers in all 50 states, and you could almost say beyond,” stated Trump. “The USMCA is estimated to add another 1.2% to our GDP (gross domestic product) and create countless new American jobs.”

If you’re keeping track, that’s two countries down and one to go, as Canada still needs to ratify the agreement, which Mexico previously approved. The agreement will take effect 90 days after all countries have approved it.

Calling it a “tremendous breakthrough for American agriculture,” Trump estimated that annual total exports to Canada and Mexico will be $315 million.

Trump listed some of the benefits of USMCA to U.S. agriculture, including Canada providing greater access to American dairy, increased poultry and egg exports, and Canada giving fair treatment to U.S. wheat.

“This agreement is a great and vital victory that will set the stage for increased agricultural opportunity in 2020 and the years to come,” said Richard Guebert Jr., Illinois Farm Bureau president. “One in every 5 acres in Illinois is planted to feed Mexican and Canadian consumers. As farmers prepare for the 2020 planting season, hope is on the horizon for our Illinois farmers to sell what they grow.”

Other components of USMCA will benefit manufacturers, auto makers and steel workers. In addition, there are new labor protections, intellectual property protections, textile industry protections and new standards for the environment.

“Together, we’re building a glorious future that is raised, grown and made right here in the glorious USA,” commented Trump. “It’s a real honor to be involved and to have helped so many people.”

The temperature trend might shift this month to more winter-like conditions, but the outlook for the precipitation pattern appears to be more of the same.

“We have a warm-up into the first of February. After that I think we could have a couple arctic blasts (this month),” McClellan said.

But McClellan points to a large pocket of frigid air bottled up over the North Pole as possible fuel for an arctic blast in the weeks ahead. Some of that air could escape and travel south across Canada into the northern U.S. if the Polar Vortex weakens or if the jet stream dips to the south.

“We could see colder temperatures in February and maybe into March,” McClellan said.

“However, we’re really struggling this winter to predict what will happen. La Nina/El Nino is neutral and expected to remain so (well into the growing season). We don’t have as many signals right now.”

The signals at this point, though, suggest a continuation of the wet pattern well into planting season.

A large portion of the Corn Belt endured 15 consecutive months of above-average precipitation Aug. 2018 to Oct. 2019. Precipitation the first 27 days of January in Illinois averaged 4.28 inches, 2.67 inches above normal.

“With all the rain last year and winter so far has had a lot of cloud cover (and minimal evaporation), so even if we don’t get a tremendous amount of precipitation into spring, a little bit of rain can cause us problems because it’s so wet,” he said.

McClellan predicts above-average precipitation each of the next three months, although not to the extent of last year, with near-normal precipitation by May. He also believes an active weather pattern this spring could boost the chances of severe weather outbreaks.

“I think it’s going to be a weather-driven market in many aspects,” he said. 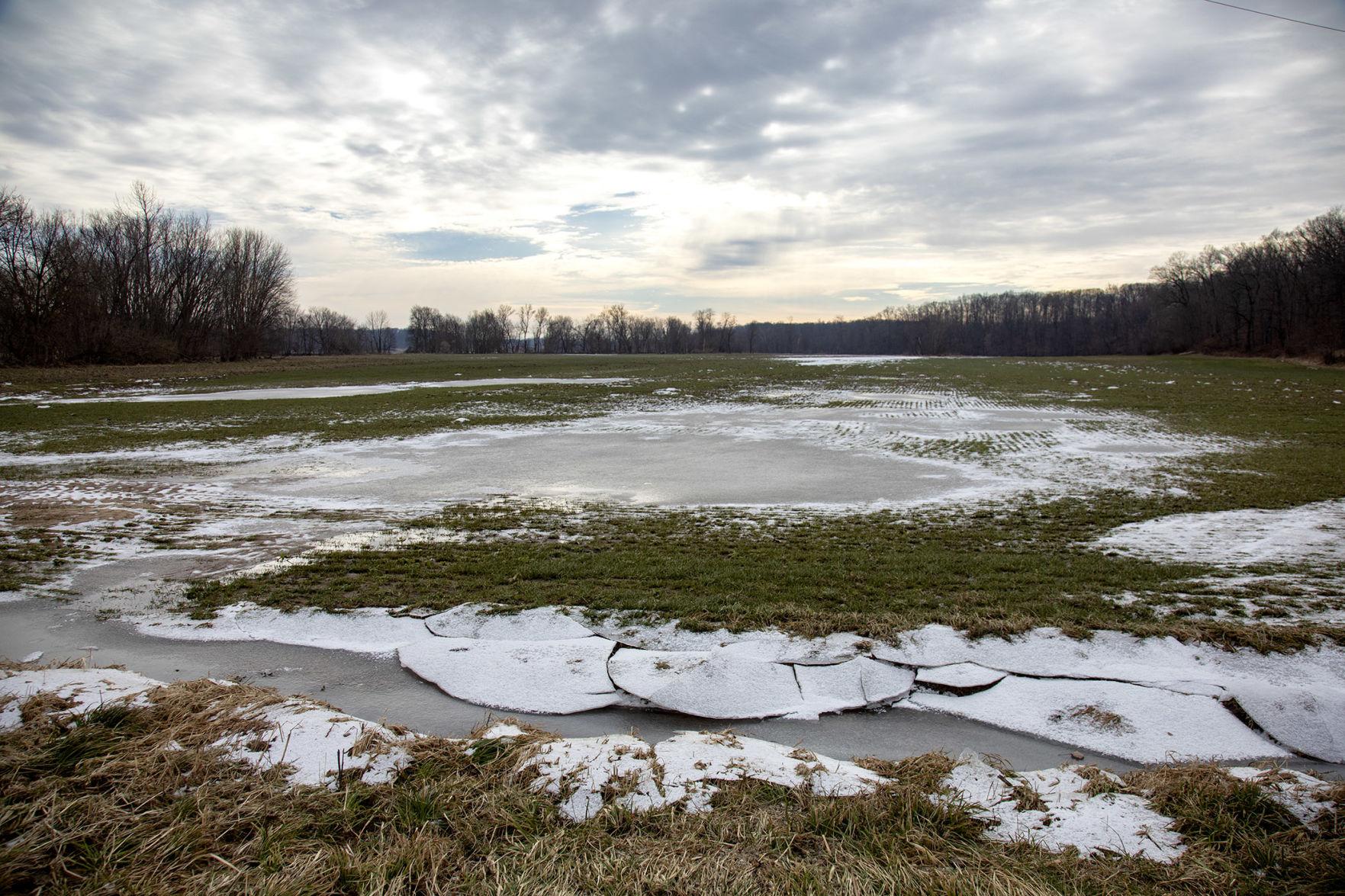 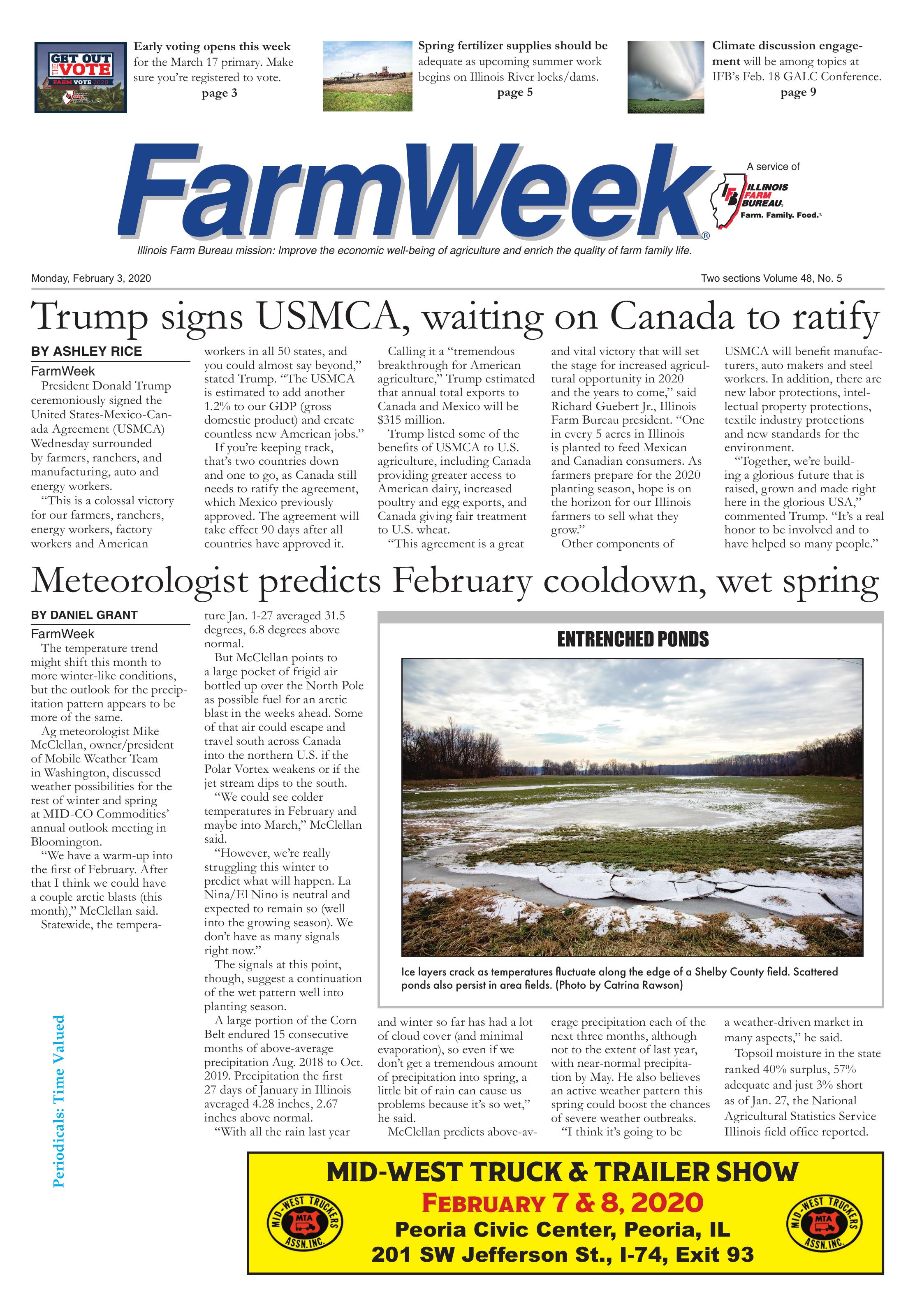