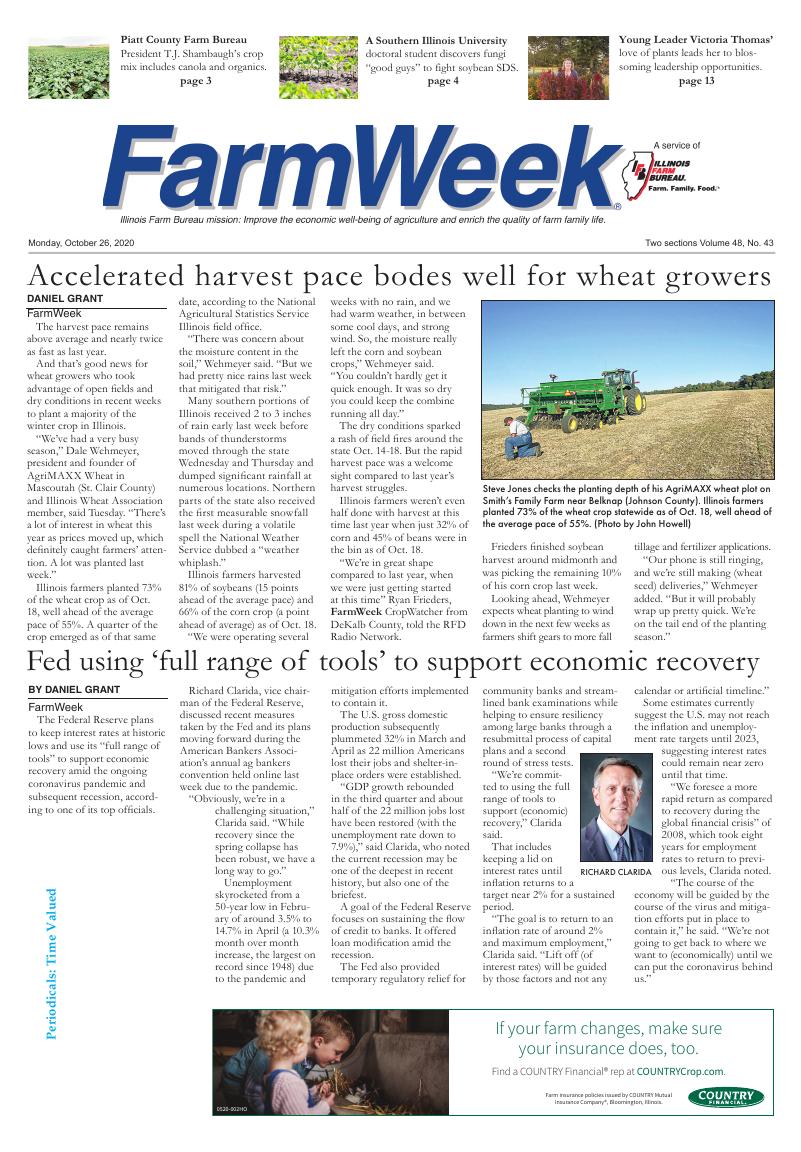 Steve Jones checks the planting depth of his AgriMAXX wheat plot on Smith’s Family Farm near Belknap (Johnson County). Illinois farmers planted 73% of the wheat crop statewide as of Oct. 18, well ahead of the average pace of 55%. (Photo by John Howell)

The harvest pace remains above average and nearly twice as fast as last year.

And that’s good news for wheat growers who took advantage of open fields and dry conditions in recent weeks to plant a majority of the winter crop in Illinois.

“We’ve had a very busy season,” Dale Wehmeyer, president and founder of AgriMAXX Wheat in Mascoutah (St. Clair County) and Illinois Wheat Association member, said Tuesday. “There’s a lot of interest in wheat this year as prices moved up, which definitely caught farmers’ attention. A lot was planted last week.”

Illinois farmers planted 73% of the wheat crop as of Oct. 18, well ahead of the average pace of 55%. A quarter of the crop emerged as of that same date, according to the National Agricultural Statistics Service Illinois field office.

“There was concern about the moisture content in the soil,” Wehmeyer said. “But we had pretty nice rains last week that mitigated that risk.”

Many southern portions of Illinois received 2 to 3 inches of rain early last week before bands of thunderstorms moved through the state Wednesday and Thursday and dumped significant rainfall at numerous locations. Northern parts of the state also received the first measurable snowfall last week during a volatile spell the National Weather Service dubbed a “weather whiplash.”

Illinois farmers harvested 81% of soybeans (15 points ahead of the average pace) and 66% of the corn crop (a point ahead of average) as of Oct. 18.

“We were operating several weeks with no rain, and we had warm weather, in between some cool days, and strong wind. So, the moisture really left the corn and soybean crops,” Wehmeyer said. “You couldn’t hardly get it quick enough. It was so dry you could keep the combine running all day.”

The dry conditions sparked a rash of field fires around the state Oct. 14-18. But the rapid harvest pace was a welcome sight compared to last year’s harvest struggles.

Illinois farmers weren’t even half done with harvest at this time last year when just 32% of corn and 45% of beans were in the bin as of Oct. 18.

“We’re in great shape compared to last year, when we were just getting started at this time” Ryan Frieders, FarmWeek CropWatcher from DeKalb County, told the RFD Radio Network.

Frieders finished soybean harvest around midmonth and was picking the remaining 10% of his corn crop last week.

Looking ahead, Wehmeyer expects wheat planting to wind down in the next few weeks as farmers shift gears to more fall tillage and fertilizer applications.

“Our phone is still ringing, and we’re still making (wheat seed) deliveries,” Wehmeyer added. “But it will probably wrap up pretty quick. We’re on the tail end of the planting season.”

The Federal Reserve plans to keep interest rates at historic lows and use its “full range of tools” to support economic recovery amid the ongoing coronavirus pandemic and subsequent recession, according to one of its top officials.

“Obviously, we’re in a challenging situation,” Clarida said. “While recovery since the spring collapse has been robust, we have a long way to go.”

Unemployment skyrocketed from a 50-year low in February of around 3.5% to 14.7% in April (a 10.3% month over month increase, the largest on record since 1948) due to the pandemic and mitigation efforts implemented to contain it.

The U.S. gross domestic production subsequently plummeted 32% in March and April as 22 million Americans lost their jobs and shelter-in-place orders were established.

“GDP growth rebounded in the third quarter and about half of the 22 million jobs lost have been restored (with the unemployment rate down to 7.9%),” said Clarida, who noted the current recession may be one of the deepest in recent history, but also one of the briefest.

A goal of the Federal Reserve focuses on sustaining the flow of credit to banks. It offered loan modification amid the recession.

The Fed also provided temporary regulatory relief for community banks and streamlined bank examinations while helping to ensure resiliency among large banks through a resubmittal process of capital plans and a second round of stress tests.

That includes keeping a lid on interest rates until inflation returns to a target near 2% for a sustained period.

“The goal is to return to an inflation rate of around 2% and maximum employment,” Clarida said. “Lift off (of interest rates) will be guided by those factors and not any calendar or artificial timeline.”

Some estimates currently suggest the U.S. may not reach the inflation and unemployment rate targets until 2023, suggesting interest rates could remain near zero until that time.

“We foresee a more rapid return as compared to recovery during the global financial crisis” of 2008, which took eight years for employment rates to return to previous levels, Clarida noted.

“The course of the economy will be guided by the course of the virus and mitigation efforts put in place to contain it,” he said. “We’re not going to get back to where we want to (economically) until we can put the coronavirus behind us.” 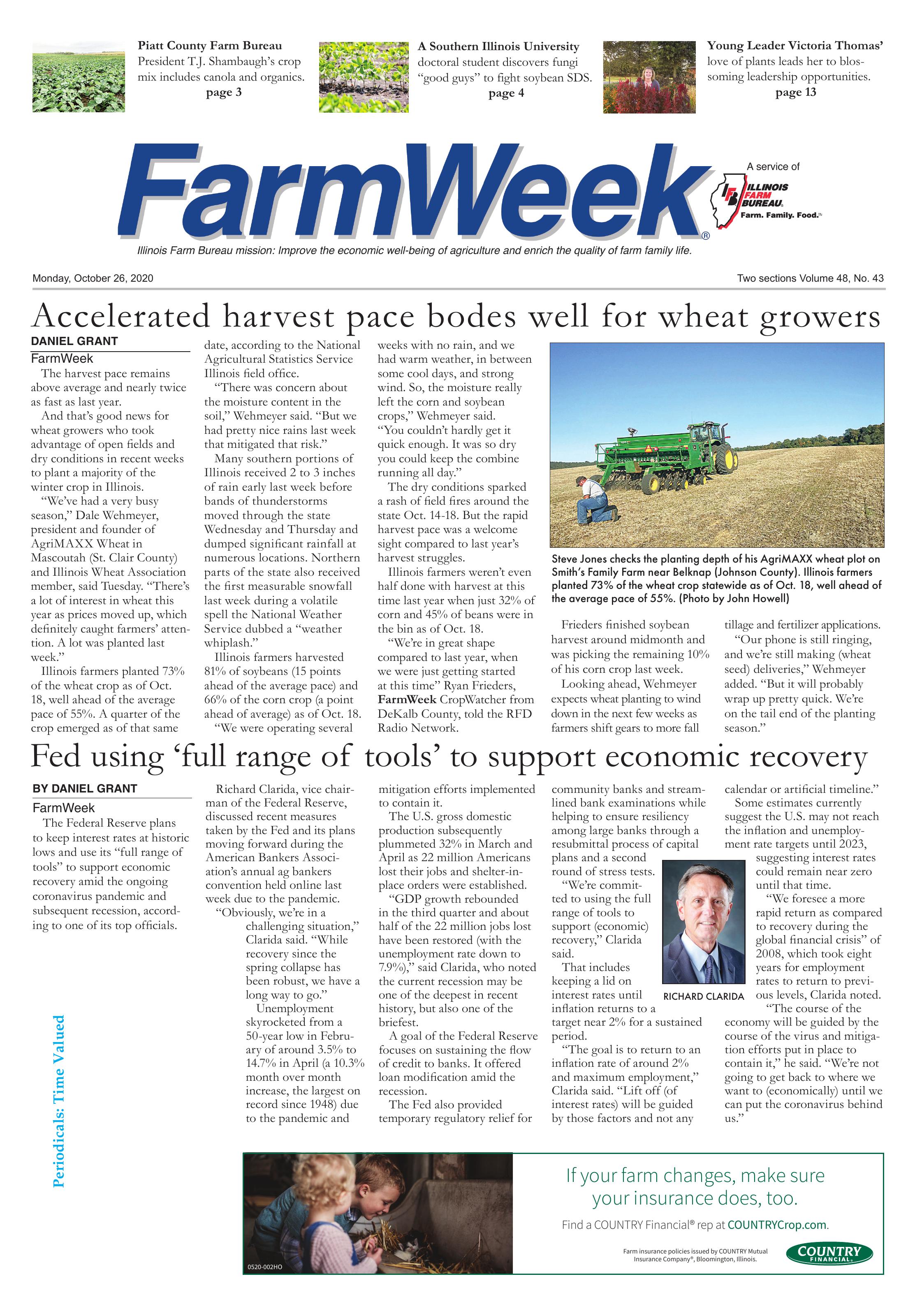