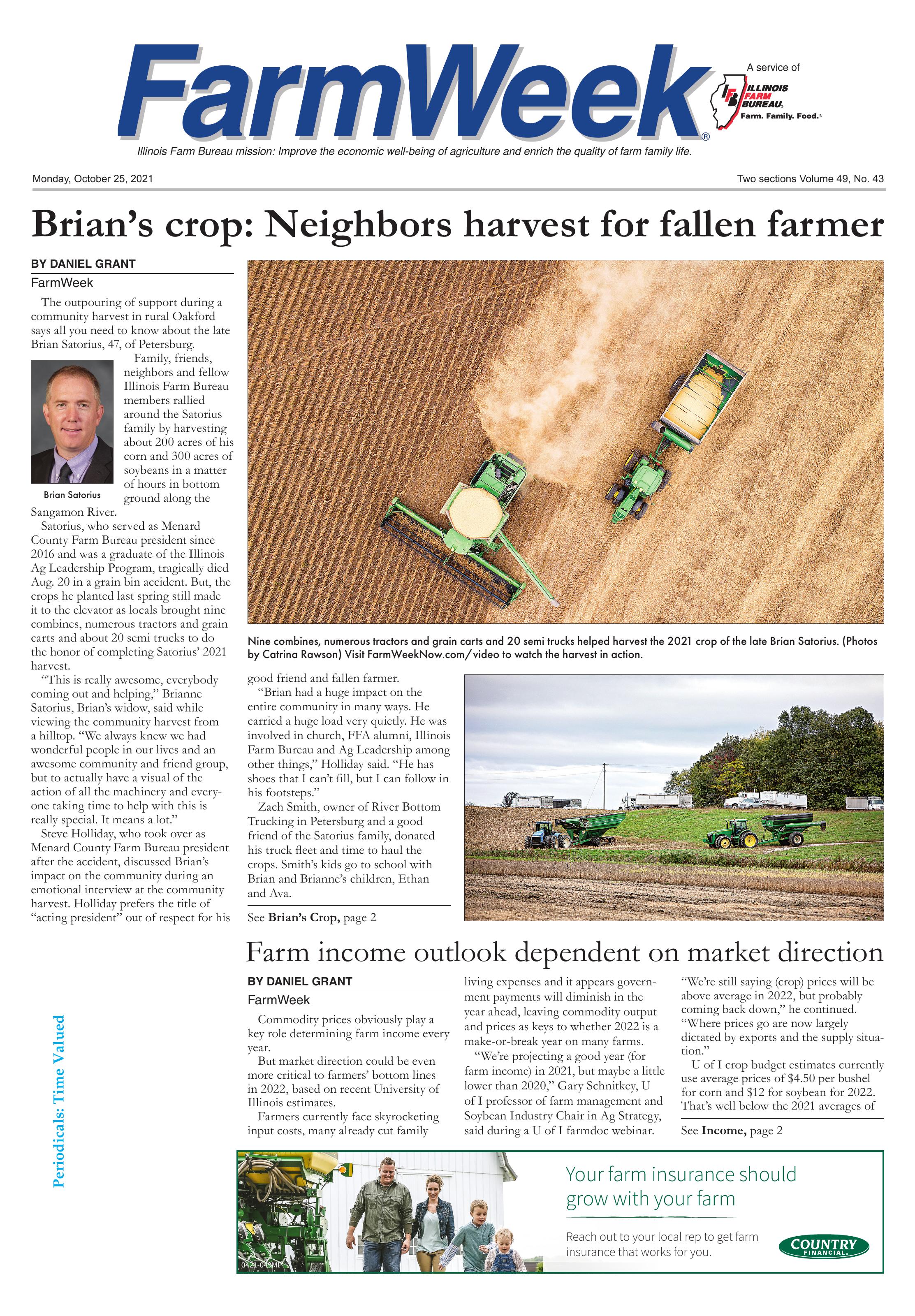 Friends gather to harvest the fields of the late Brian Satorius. (Photo by Holly Meteer)

Many showed up to harvest the late Brian Satorius' crop at his Menard County farm this week.

The outpouring of support during a community harvest in rural Oakford says all you need to know about the late Brian Satorius, 47, of Petersburg. 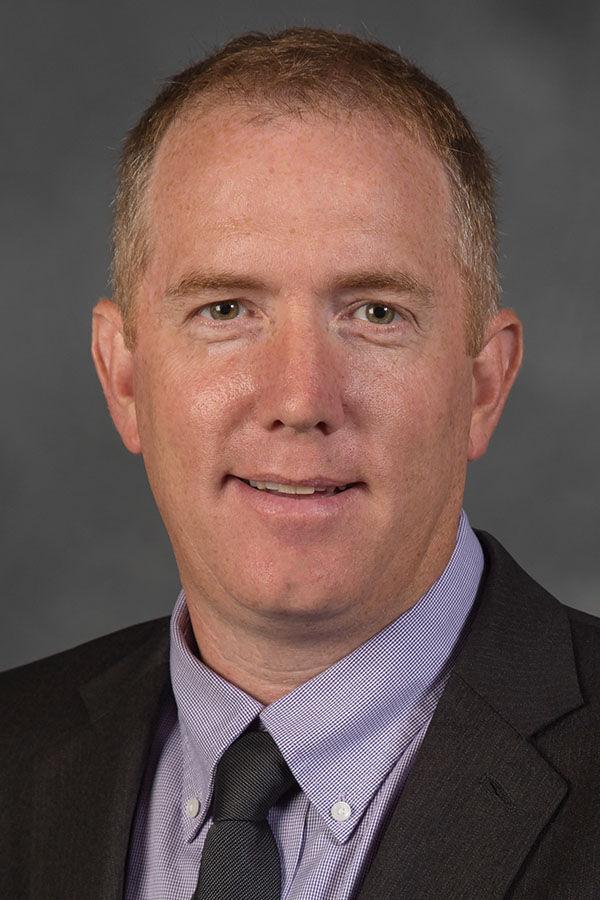 Family, friends, neighbors and fellow Illinois Farm Bureau members rallied around the Satorius family by harvesting about 200 acres of his corn and 300 acres of soybeans in a matter of hours in bottom ground along the Sangamon River.

Satorius, who served as Menard County Farm Bureau president since 2016 and was a graduate of the Illinois Ag Leadership Program, tragically died Aug. 20 in a grain bin accident. But, the crops he planted last spring still made it to the elevator as locals brought nine combines, numerous tractors and grain carts and about 20 semi trucks to do the honor of completing Satorius’ 2021 harvest.

“This is really awesome, everybody coming out and helping,” Brianne Satorius, Brian’s widow, said while viewing the community harvest from a hilltop. “We always knew we had wonderful people in our lives and an awesome community and friend group, but to actually have a visual of the action of all the machinery and everyone taking time to help with this is really special. It means a lot.”

Steve Holliday, who took over as Menard County Farm Bureau president after the accident, discussed Brian’s impact on the community during an emotional interview at the community harvest. Holliday prefers the title of “acting president” out of respect for his good friend and fallen farmer.

“Brian had a huge impact on the entire community in many ways. He carried a huge load very quietly. He was involved in church, FFA alumni, Illinois Farm Bureau and Ag Leadership among other things,” Holliday said. “He has shoes that I can’t fill, but I can follow in his footsteps.”

Zach Smith, owner of River Bottom Trucking in Petersburg and a good friend of the Satorius family, donated his truck fleet and time to haul the crops. Smith’s kids go to school with Brian and Brianne’s children, Ethan and Ava.

“He’d do the same for any of us, no doubt about it,” Smith said of Brian. “He’d give you the shirt off his back.”

Satorius worked as an applications engineer for TeeJet in Springfield for about 20 years and enjoyed helping people. But he truly lived his dream when farming.

“Brian was one of the most passionate people I knew about agriculture,” said Les Wankel, a Menard County farmer who grew up with Brian in school, 4-H and FFA. “We wanted to do this (community harvest) for Brian and his family. Brianne is a staple of the community.

“It’s bittersweet today,” he continued. “We wanted to do something to help his kids and wife, but at the same time it kind of rips your heart out to be here today.”

“This is one of those days you love and hate,” Gellerman said. “You hate that you have to do it, but you love seeing everyone come together.”

An uplifting development throughout the day was the fact that the number of volunteers climbed steadily as word spread around the county and additional farmers paused their own fieldwork to help harvest Brian’s crops.

“These kinds of events are generally what farm communities do when there’s a situation like this,” Holliday added. “Those in agriculture tend to rally around each other.”

But market direction could be even more critical to farmers’ bottom lines in 2022, based on recent University of Illinois estimates.

Farmers currently face skyrocketing input costs, many already cut family living expenses and it appears government payments will diminish in the year ahead, leaving commodity output and prices as keys to whether 2022 is a make-or-break year on many farms.

“We’re projecting a good year (for farm income) in 2021, but maybe a little lower than 2020,” Gary Schnitkey, U of I professor of farm management and Soybean Industry Chair in Ag Strategy, said during a U of I farmdoc webinar. “We’re still saying (crop) prices will be above average in 2022, but probably coming back down,” he continued. “Where prices go are now largely dictated by exports and the supply situation.”

“Operating and land returns are projected to still be above average cash rents moving into 2022,” Schnitkey said. “But, if we go back to $4 corn and $10 beans like from 2015 to 2019, we’d have very low returns, well below land costs.”

Young farmers in particular are vulnerable to any major commodity price swings, according to Nick Paulson, U of I associate professor and director of graduate programs in the Department of Agricultural and Consumer Economics.

“The debt to asset is in a strong position (among members of the Illinois Farm Business Farm Management Association), but there is a lot of variation,” Paulson said. “Younger farmers tend to carry more debt to finance their operations. Younger operators are much more highly leveraged, so they’re more sensitive to (commodity) price fluctuations and income levels.”

Farmers are also feeling the pinch of higher input costs, which will reduce their ability to improve their bottom lines next year by cutting expenses. The average price of anhydrous ammonia recently reached $856 per ton in the state, up $50 from last month.

“It’s difficult to find a cost that could be down for 2022. Fertilizer costs are going up about $50 per acre based on prices we see now,” Schnitkey said. “It could have an influence on corn and soybean decisions going into 2022. Corn projects to be less profitable than soybeans in 2022.”

U of I estimates for operating and land returns on highly productive land in central Illinois next year are about $368 per acre for corn and near $400 for soybeans. But, if the corn price averages $5 per bushel instead of $4.50, then returns would be near equal for both crops.

Good returns the past two years also could put more pressure on cash rental rates, which in turn could give farmers less wiggle room on their balance sheets next year.

“Rents were pretty stable (from 2016 to 2019),” said Dale Lattz, U of I farmdoc research associate. “But, the last year or two with higher incomes, cash rent discussions have probably heated up a bit.”

The National Agricultural Statistics Service estimated cash rents averaged $227 per acre in Illinois for 2021, compared to $233 in Iowa and $200 in Indiana.

“That’s a blend of the whole state,” Lattz said of the cash rent average. “It varies a lot.”

Average cash rental rates by county ranged from $52 per acre up to $311 this year.

Meanwhile, farmers could have a tough time tightening their belts on family living expenses in the year ahead after already cutting back.

Total family living expenses divided by tillable acre averaged $108 per acre from 2011-21, but farm families trimmed that down to $97 per acre by 2020, according to farmdoc.