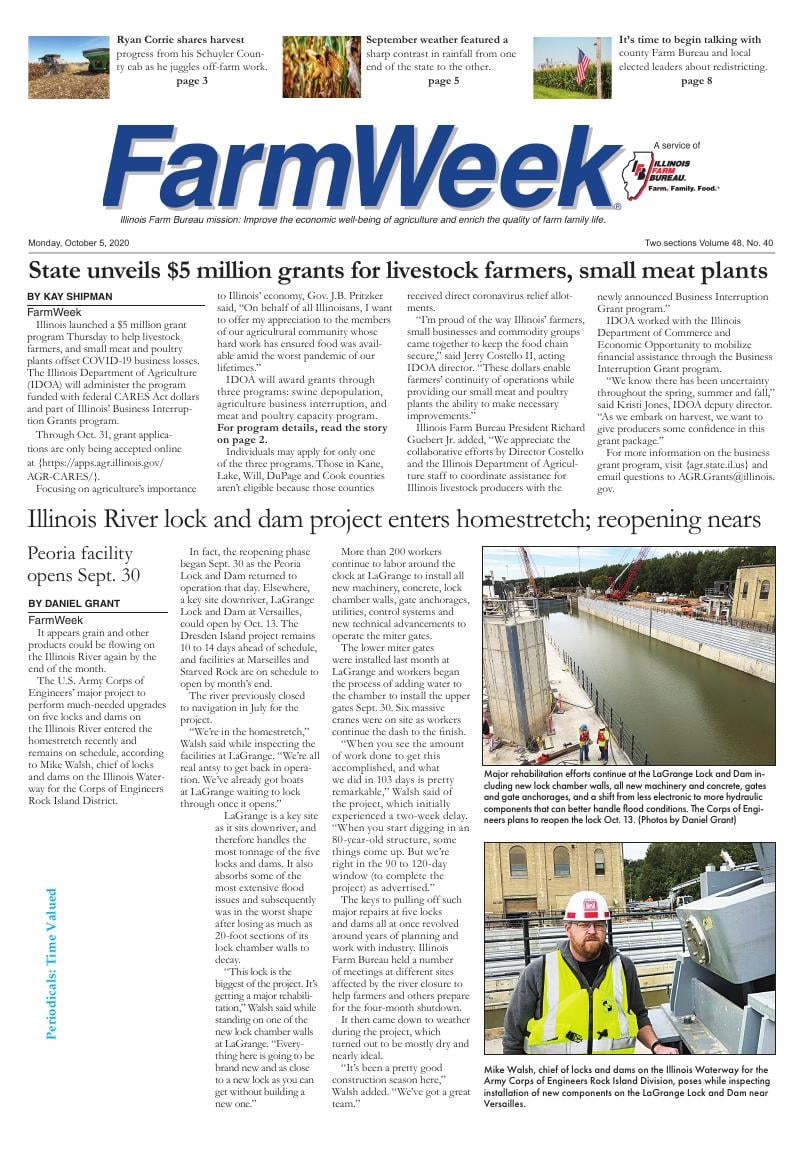 Through Oct. 31, grant applications are only being accepted online at {https://apps.agr.illinois.gov/AGR-CARES/}.

Focusing on agriculture’s importance to Illinois’ economy, Gov. J.B. Pritzker said, “On behalf of all Illinoisans, I want to offer my appreciation to the members of our agricultural community whose hard work has ensured food was available amid the worst pandemic of our lifetimes.”

Individuals may apply for only one of the three programs. Those in Kane, Lake, Will, DuPage and Cook counties aren’t eligible because those counties received direct coronavirus relief allotments.

IDOA worked with the Illinois Department of Commerce and Economic Opportunity to mobilize financial assistance through the Business Interruption Grant program.

“We know there has been uncertainty throughout the spring, summer and fall,” said Kristi Jones, IDOA deputy director. “As we embark on harvest, we want to give producers some confidence in this grant package.”

For more information on the business grant program, visit {agr.state.il.us} and email questions to AGR.Grants@illinois.gov.

Mike Walsh, chief of locks and dams on the Illinois Waterway for the Army Corps of Engineers Rock Island Division, poses while inspecting installation of new components on the LaGrange Lock and Dam near Versailles.

Major rehabilitation efforts continue at the LaGrange Lock and Dam including new lock chamber walls, all new machinery and concrete, gates and gate anchorages, and a shift from less electronic to more hydraulic components that can better handle flood conditions. The Corps of Engineers plans to reopen the lock Oct. 13. (Photos by Daniel Grant)

It appears grain and other products could be flowing on the Illinois River again by the end of the month.

In fact, the reopening phase began Sept. 30 as the Peoria Lock and Dam returned to operation that day. Elsewhere, a key site downriver, LaGrange Lock and Dam at Versailles, could open by Oct. 13. The Dresden Island project remains 10 to 14 days ahead of schedule, and facilities at Marseilles and Starved Rock are on schedule to open by month’s end.

The river previously closed to navigation in July for the project.

“We’re in the homestretch,” Walsh said while inspecting the facilities at LaGrange. “We’re all real antsy to get back in operation. We’ve already got boats at LaGrange waiting to lock through once it opens.”

LaGrange is a key site as it sits downriver, and therefore handles the most tonnage of the five locks and dams. It also absorbs some of the most extensive flood issues and subsequently was in the worst shape after losing as much as 20-foot sections of its lock chamber walls to decay.

“This lock is the biggest of the project. It’s getting a major rehabilitation,” Walsh said while standing on one of the new lock chamber walls at LaGrange. “Everything here is going to be brand new and as close to a new lock as you can get without building a new one.”

The lower miter gates were installed last month at LaGrange and workers began the process of adding water to the chamber to install the upper gates Sept. 30. Six massive cranes were on site as workers continue the dash to the finish.

“When you see the amount of work done to get this accomplished, and what we did in 103 days is pretty remarkable,” Walsh said of the project, which initially experienced a two-week delay. “When you start digging in an 80-year-old structure, some things come up. But we’re right in the 90 to 120-day window (to complete the project) as advertised.”

The keys to pulling off such major repairs at five locks and dams all at once revolved around years of planning and work with industry. Illinois Farm Bureau held a number of meetings at different sites affected by the river closure to help farmers and others prepare for the four-month shutdown.

It then came down to weather during the project, which turned out to be mostly dry and nearly ideal. 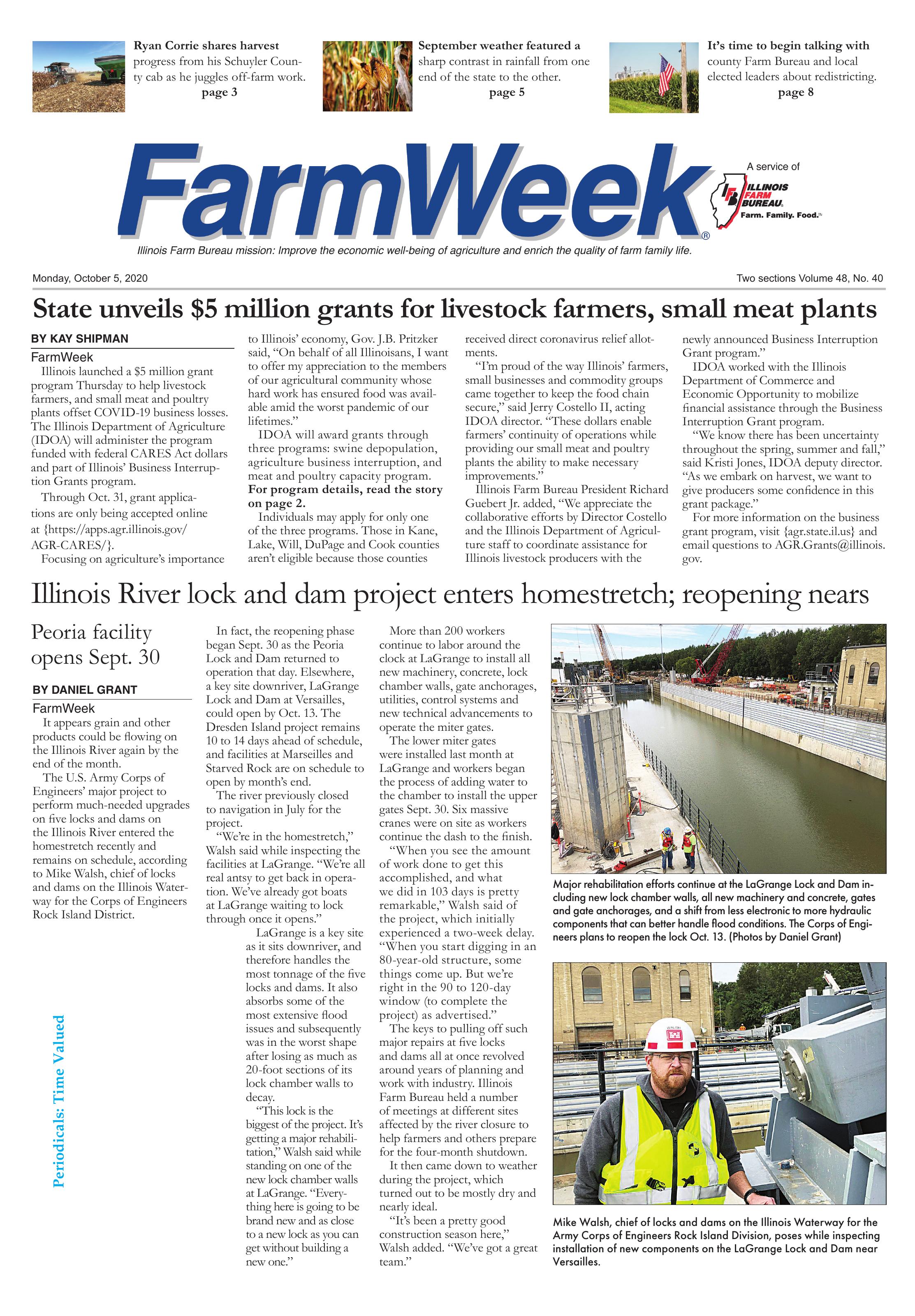