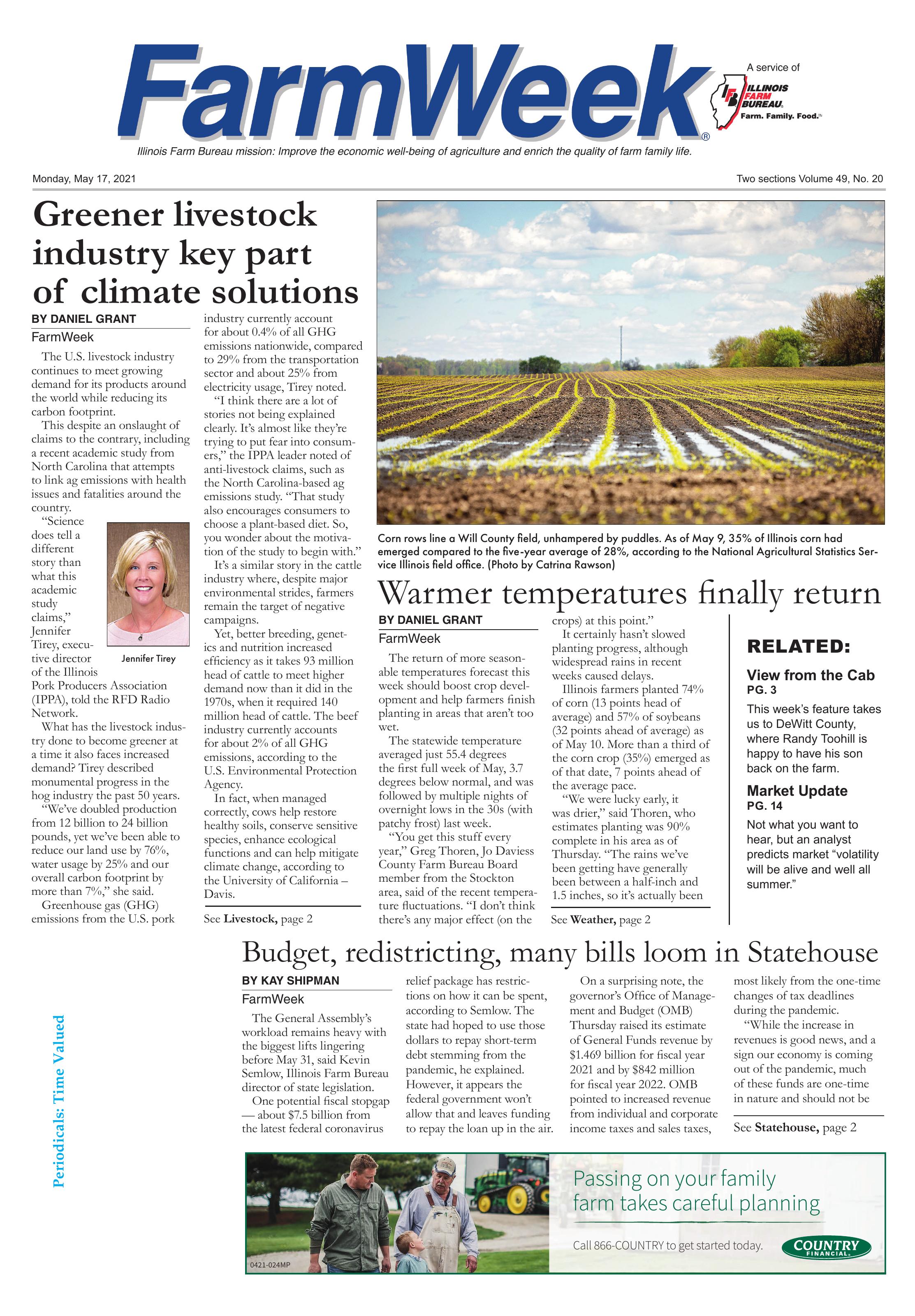 The return of more seasonable temperatures forecast this week should boost crop development and help farmers finish planting in areas that aren’t too wet.

The statewide temperature averaged just 55.4 degrees the first full week of May, 3.7 degrees below normal, and was followed by multiple nights of overnight lows in the 30s (with patchy frost) last week.

“You get this stuff every year,” Greg Thoren, Jo Daviess County Farm Bureau Board member from the Stockton area, said of the recent temperature fluctuations. “I don’t think there’s any major effect (on the crops) at this point.”

“We were lucky early, it was drier,” said Thoren, who estimates planting was 90% complete in his area as of Thursday. “The rains we’ve been getting have generally been between a half-inch and 1.5 inches, so it’s actually been pretty good conditions (in northwest Illinois).”

Ron Haase, FarmWeek CropWatcher from Iroquois County, planted all his soybeans and 99% of corn as of May 10, but dealt with a weather delay after a 1.3-inch rain May 9.

“It’s one of the earliest (in the season) to get done,” Haase told the RFD Radio Network. “We’ve had years where we planted in a shorter window (but not been done this early).”

The forecast this week calls for rains from the weekend to possibly spill over into Monday, with high temperatures warming back up into the 70s and even 80s later in the week, according to AccuWeather.com.

The warmup should advance the wheat crop, forages and pasture development, along with corn and soybeans.

“As of today, first crop hay may be shorter. The wheat and rye crops also could be shorter as things headed out at the same time due to some warmer temperatures a month ago,” Thoren said.

More than half (58%) of winter wheat headed in the state as of May 10 compared to the average pace of 48%, the National Agricultural Statistics Service Illinois field office reported.

The portion of the wheat crop rated good to excellent jumped 2 points last week to 70%, but the portion rated poor to very poor also increased 7 points to 13%, leaving the remaining 17% of the crop rated fair.

One potential fiscal stopgap — about $7.5 billion from the latest federal coronavirus relief package has restrictions on how it can be spent, according to Semlow. The state had hoped to use those dollars to repay short-term debt stemming from the pandemic, he explained. However, it appears the federal government won’t allow that and leaves funding to repay the loan up in the air.

On a surprising note, the governor’s Office of Management and Budget (OMB) Thursday raised its estimate of General Funds revenue by $1.469 billion for fiscal year 2021 and by $842 million for fiscal year 2022. OMB pointed to increased revenue from individual and corporate income taxes and sales taxes, most likely from the one-time changes of tax deadlines during the pandemic.

“While the increase in revenues is good news, and a sign our economy is coming out of the pandemic, much of these funds are one-time in nature and should not be expected to recur in FY2022,” Deputy Gov. Dan Hynes said in a statement. “However, the pandemic is still with us, and we have a lot of work ahead of us to ensure the state remains on sound fiscal footing, including repaying the federal government for loans used to cover current coronavirus expenses.”

With an upcoming committee deadline, House committees are meeting virtually while Senate committees hold hybrid hearings with a mix of senators in person and joining virtually. “There are still a large number of bills that have not been worked on,” Semlow pointed out.

A new map of General Assembly districts is still expected by the end of the session, but a redrawn congressional district map “is up in the air,” Semlow said. “There is some speculation there may be a push to move the primary election from March back to June or July.”

Discussions on renewable energy policy also continue. “We know there are negotiations between key stakeholders, but there are still widely different opinions,” Semlow said. IFB is monitoring proposals and awaiting what emerges from discussions, he added.

The U.S. livestock industry continues to meet growing demand for its products around the world while reducing its carbon footprint.

This despite an onslaught of claims to the contrary, including a recent academic study from North Carolina that attempts to link ag emissions with health issues and fatalities around the country.

What has the livestock industry done to become greener at a time it also faces increased demand? Tirey described monumental progress in the hog industry the past 50 years.

“We’ve doubled production from 12 billion to 24 billion pounds, yet we’ve been able to reduce our land use by 76%, water usage by 25% and our overall carbon footprint by more than 7%,” she said.

Greenhouse gas (GHG) emissions from the U.S. pork industry currently account for about 0.4% of all GHG emissions nationwide, compared to 29% from the transportation sector and about 25% from electricity usage, Tirey noted.

“I think there are a lot of stories not being explained clearly. It’s almost like they’re trying to put fear into consumers,” the IPPA leader noted of anti-livestock claims, such as the North Carolina-based ag emissions study. “That study also encourages consumers to choose a plant-based diet. So, you wonder about the motivation of the study to begin with.”

It’s a similar story in the cattle industry where, despite major environmental strides, farmers remain the target of negative campaigns.

Yet, better breeding, genetics and nutrition increased efficiency as it takes 93 million head of cattle to meet higher demand now than it did in the 1970s, when it required 140 million head of cattle. The beef industry currently accounts for about 2% of all GHG emissions, according to the U.S. Environmental Protection Agency.

“Farmers who raise any species of livestock implement various tools and technologies to improve not only their respective farms, but also to improve sustainability by including cover crops, improved genetics and nutrient management on their farming operations,” said Tasha Bunting, Illinois Farm Bureau assistant director of commodities and livestock programs. “This has allowed today’s farmers to produce more, using fewer resources.”

Shifting to milk production, the Journal of Animal Sciences reported the U.S. dairy industry considerably reduced its environmental impact the past 75 years.

It currently accounts for about 1% of GHG emissions.

“Industrywide, we’ve definitely shifted to look more at sustainability, with a goal of being carbon-neutral by 2050,” said Bill Deutsch, chairman of the Illinois Division of Midwest Dairy and DeKalb County Farm Bureau member who farms with his brother, Pat, near Sycamore. “In general, a lot of people don’t realize in dairy production we’re just a fraction over 1% of the carbon footprint (nationwide).”