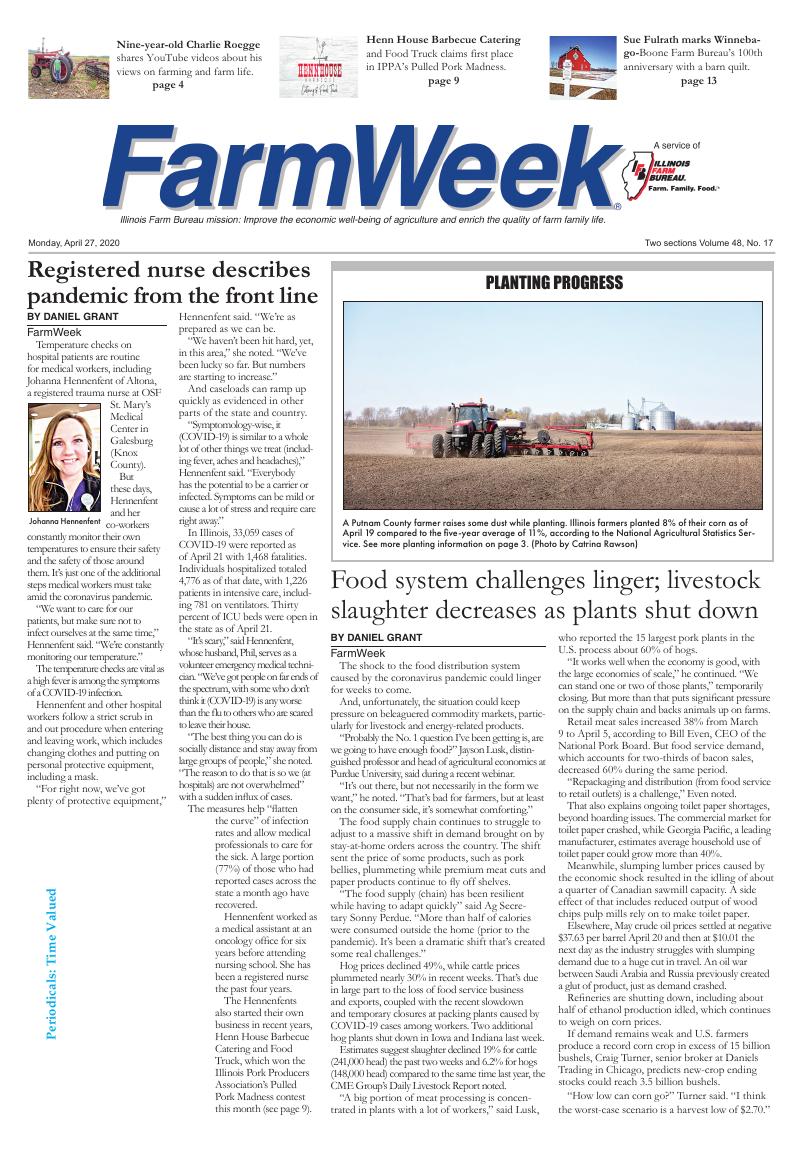 The shock to the food distribution system caused by the coronavirus pandemic could linger for weeks to come.

And, unfortunately, the situation could keep pressure on beleaguered commodity markets, particularly for livestock and energy-related products.

“Probably the No. 1 question I’ve been getting is, are we going to have enough food?” Jayson Lusk, distinguished professor and head of agricultural economics at Purdue University, said during a recent webinar.

“It’s out there, but not necessarily in the form we want,” he noted. “That’s bad for farmers, but at least on the consumer side, it’s somewhat comforting.”

The food supply chain continues to struggle to adjust to a massive shift in demand brought on by stay-at-home orders across the country. The shift sent the price of some products, such as pork bellies, plummeting while premium meat cuts and paper products continue to fly off shelves.

“The food supply (chain) has been resilient while having to adapt quickly” said Ag Secretary Sonny Perdue. “More than half of calories were consumed outside the home (prior to the pandemic). It’s been a dramatic shift that’s created some real challenges.”

Hog prices declined 49%, while cattle prices plummeted nearly 30% in recent weeks. That’s due in large part to the loss of food service business and exports, coupled with the recent slowdown and temporary closures at packing plants caused by COVID-19 cases among workers. Two additional hog plants shut down in Iowa and Indiana last week.

“A big portion of meat processing is concentrated in plants with a lot of workers,” said Lusk, who reported the 15 largest pork plants in the U.S. process about 60% of hogs.

“It works well when the economy is good, with the large economies of scale,” he continued. “We can stand one or two of those plants,” temporarily closing. But more than that puts significant pressure on the supply chain and backs animals up on farms.

Retail meat sales increased 38% from March 9 to April 5, according to Bill Even, CEO of the National Pork Board. But food service demand, which accounts for two-thirds of bacon sales, decreased 60% during the same period.

“Repackaging and distribution (from food service to retail outlets) is a challenge,” Even noted.

Meanwhile, slumping lumber prices caused by the economic shock resulted in the idling of about a quarter of Canadian sawmill capacity. A side effect of that includes reduced output of wood chips pulp mills rely on to make toilet paper.

Elsewhere, May crude oil prices settled at negative $37.63 per barrel April 20 and then at $10.01 the next day as the industry struggles with slumping demand due to a huge cut in travel. An oil war between Saudi Arabia and Russia previously created a glut of product, just as demand crashed.

Refineries are shutting down, including about half of ethanol production idled, which continues to weigh on corn prices.

But these days, Hennenfent and her co-workers constantly monitor their own temperatures to ensure their safety and the safety of those around them. It’s just one of the additional steps medical workers must take amid the coronavirus pandemic.

“We want to care for our patients, but make sure not to infect ourselves at the same time,” Hennenfent said. “We’re constantly monitoring our temperature.”

The temperature checks are vital as a high fever is among the symptoms of a COVID-19 infection.

Hennenfent and other hospital workers follow a strict scrub in and out procedure when entering and leaving work, which includes changing clothes and putting on personal protective equipment, including a mask.

“For right now, we’ve got plenty of protective equipment,” Hennenfent said. “We’re as prepared as we can be.

“We haven’t been hit hard, yet, in this area,” she noted. “We’ve been lucky so far. But numbers are starting to increase.”

And caseloads can ramp up quickly as evidenced in other parts of the state and country.

“Symptomology-wise, it (COVID-19) is similar to a whole lot of other things we treat (including fever, aches and headaches),” Hennenfent said. “Everybody has the potential to be a carrier or infected. Symptoms can be mild or cause a lot of stress and require care right away.”

In Illinois, 33,059 cases of COVID-19 were reported as of April 21 with 1,468 fatalities. Individuals hospitalized totaled 4,776 as of that date, with 1,226 patients in intensive care, including 781 on ventilators. Thirty percent of ICU beds were open in the state as of April 21.

“It’s scary,” said Hennenfent, whose husband, Phil, serves as a volunteer emergency medical technician. “We’ve got people on far ends of the spectrum, with some who don’t think it (COVID-19) is any worse than the flu to others who are scared to leave their house.

“The best thing you can do is socially distance and stay away from large groups of people,” she noted. “The reason to do that is so we (at hospitals) are not overwhelmed” with a sudden influx of cases.

The measures help “flatten the curve” of infection rates and allow medical professionals to care for the sick. A large portion (77%) of those who had reported cases across the state a month ago have recovered.

Hennenfent worked as a medical assistant at an oncology office for six years before attending nursing school. She has been a registered nurse the past four years. 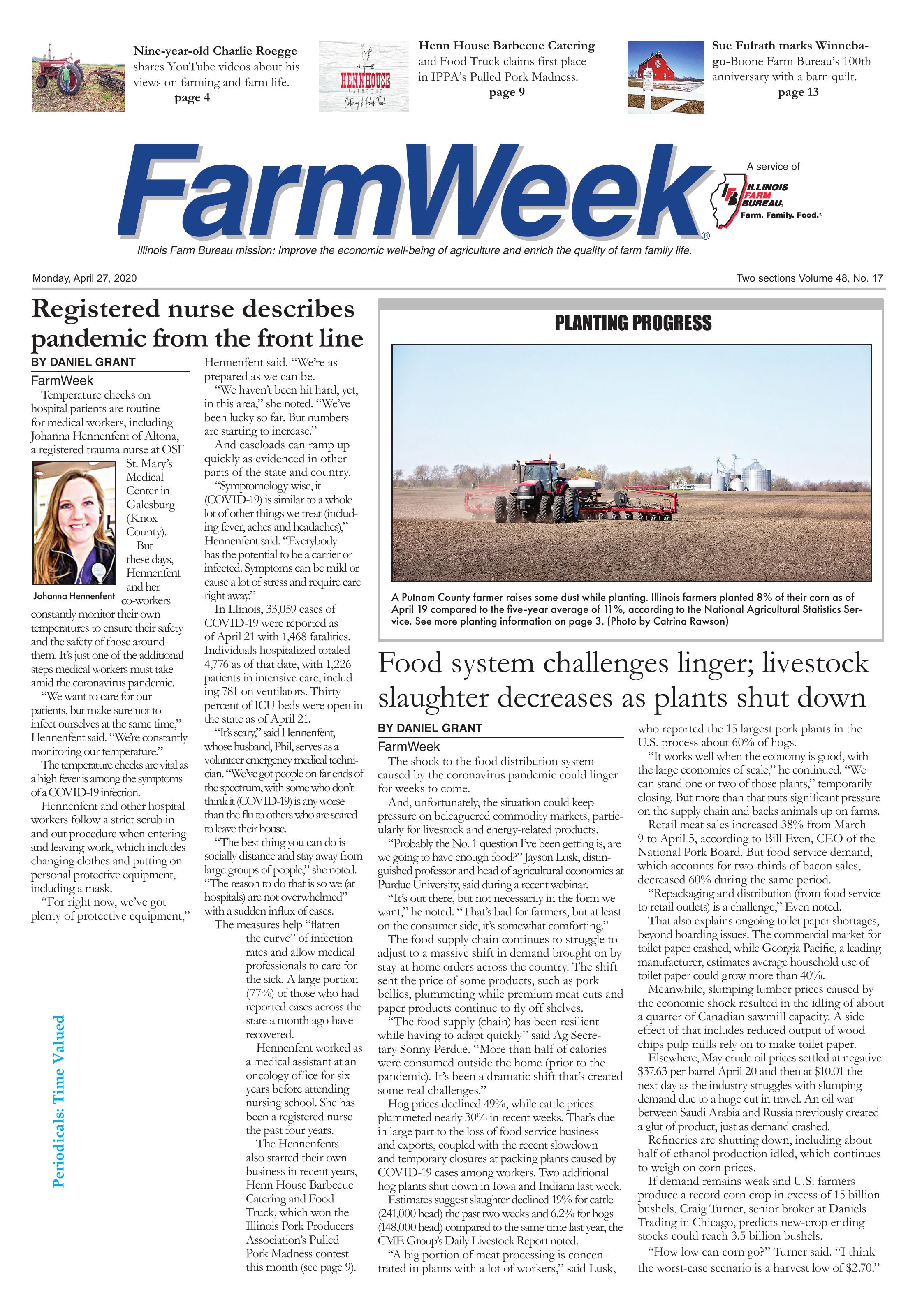