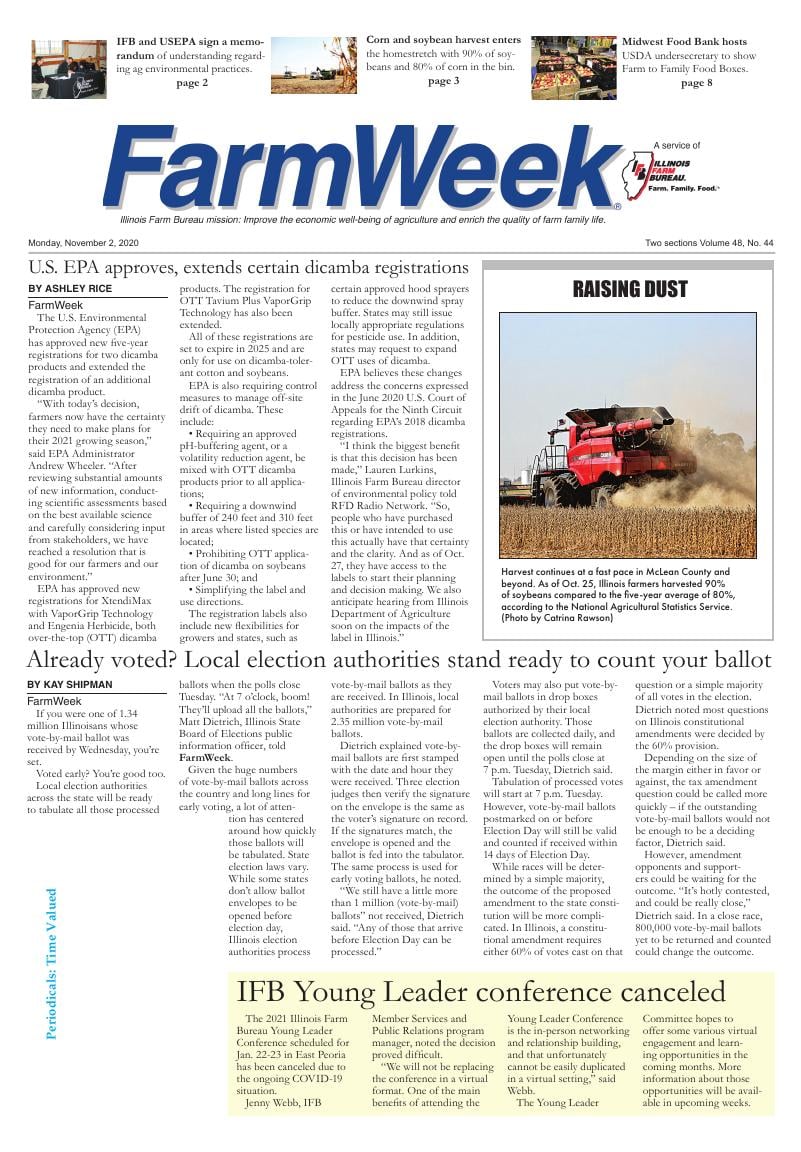 “With today’s decision, farmers now have the certainty they need to make plans for their 2021 growing season,” said EPA Administrator Andrew Wheeler. “After reviewing substantial amounts of new information, conducting scientific assessments based on the best available science and carefully considering input from stakeholders, we have reached a resolution that is good for our farmers and our environment.”

All of these registrations are set to expire in 2025 and are only for use on dicamba-tolerant cotton and soybeans.

EPA is also requiring control measures to manage off-site drift of dicamba. These include:

• Requiring an approved pH-buffering agent, or a volatility reduction agent, be mixed with OTT dicamba products prior to all applications;

• Requiring a downwind buffer of 240 feet and 310 feet in areas where listed species are located;

• Prohibiting OTT application of dicamba on soybeans after June 30; and

• Simplifying the label and use directions.

The registration labels also include new flexibilities for growers and states, such as certain approved hood sprayers to reduce the downwind spray buffer. States may still issue locally appropriate regulations for pesticide use. In addition, states may request to expand OTT uses of dicamba.

EPA believes these changes address the concerns expressed in the June 2020 U.S. Court of Appeals for the Ninth Circuit regarding EPA’s 2018 dicamba registrations.

“I think the biggest benefit is that this decision has been made,” Lauren Lurkins, Illinois Farm Bureau director of environmental policy told RFD Radio Network. “So, people who have purchased this or have intended to use this actually have that certainty and the clarity. And as of Oct. 27, they have access to the labels to start their planning and decision making. We also anticipate hearing from Illinois Department of Agriculture soon on the impacts of the label in Illinois.”

Already voted? Your ballot ready to be counted

If you were one of 1.34 million Illinoisans whose vote-by-mail ballot was received by Wednesday, you’re set.

Local election authorities across the state will be ready to tabulate all those processed ballots when the polls close Tuesday. “At 7 o’clock, boom! They’ll upload all the ballots,” Matt Dietrich, Illinois State Board of Elections public information officer, told FarmWeek.

Dietrich explained vote-by-mail ballots are first stamped with the date and hour they were received. Three election judges then verify the signature on the envelope is the same as the voter’s signature on record. If the signatures match, the envelope is opened and the ballot is fed into the tabulator. The same process is used for early voting ballots, he noted.

“We still have a little more than 1 million (vote-by-mail) ballots” not received, Dietrich said. “Any of those that arrive before Election Day can be processed.”

Voters may also put vote-by-mail ballots in drop boxes authorized by their local election authority. Those ballots are collected daily, and the drop boxes will remain open until the polls close at 7 p.m. Tuesday, Dietrich said.

Tabulation of processed votes will start at 7 p.m. Tuesday. However, vote-by-mail ballots postmarked on or before Election Day will still be valid and counted if received within 14 days of Election Day.

Depending on the size of the margin either in favor or against, the tax amendment question could be called more quickly – if the outstanding vote-by-mail ballots would not be enough to be a deciding factor, Dietrich said.

However, amendment opponents and supporters could be waiting for the outcome. “It’s hotly contested, and could be really close,” Dietrich said. In a close race, 800,000 vote-by-mail ballots yet to be returned and counted could change the outcome.

The 2021 Illinois Farm Bureau Young Leader Conference scheduled for Jan. 22-23 in East Peoria has been canceled due to the ongoing COVID-19 situation.

“We will not be replacing the conference in a virtual format. One of the main benefits of attending the Young Leader Conference is the in-person networking and relationship building, and that unfortunately cannot be easily duplicated in a virtual setting,” said Webb.

The Young Leader Committee hopes to offer some various virtual engagement and learning opportunities in the coming months. More information about those opportunities will be available in upcoming weeks. 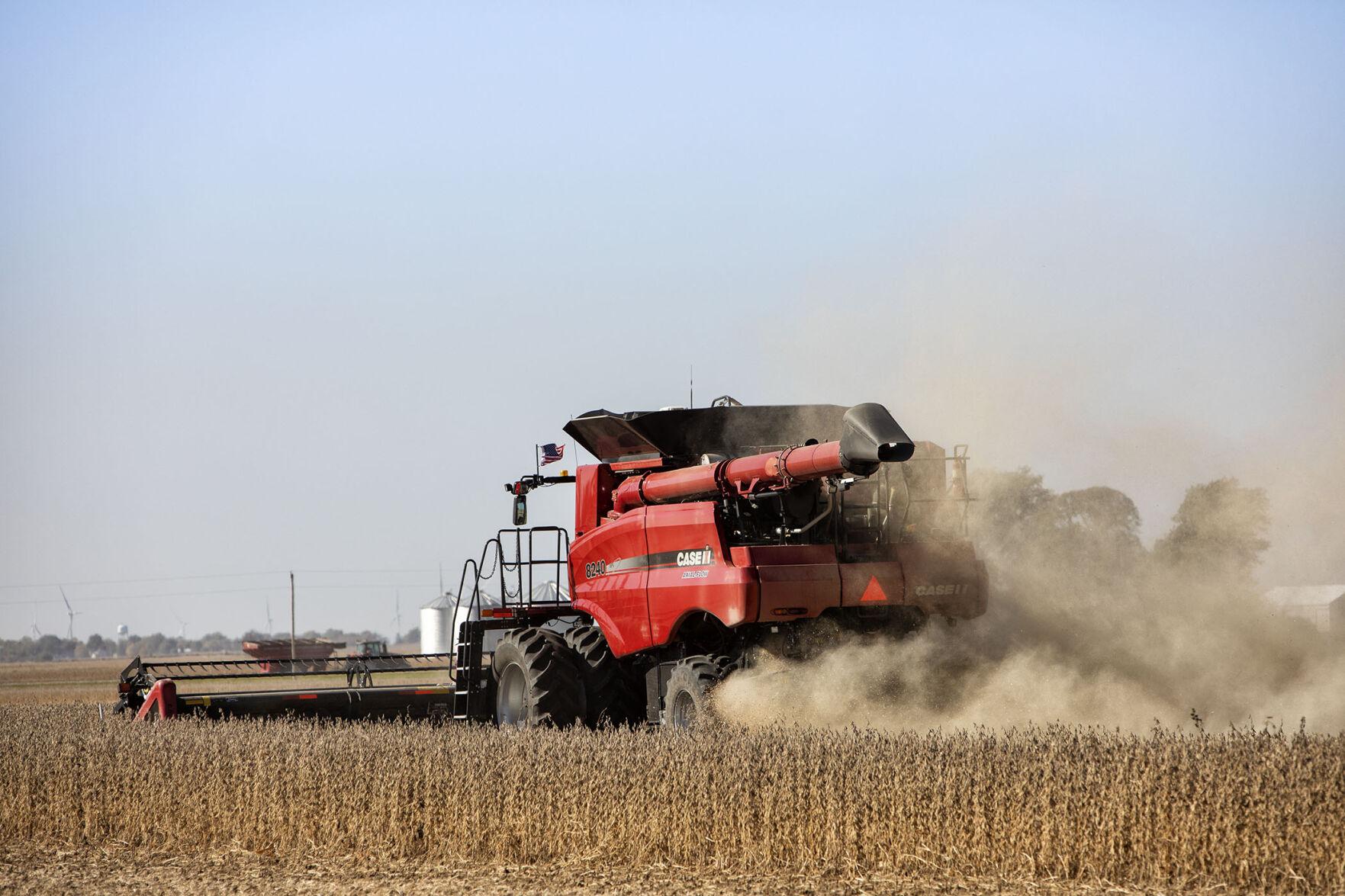 Harvest continues at a fast pace in McLean County and beyond. As of Oct. 25, Illinois farmers harvested 90% of soybeans compared to the five-year average of 80%, according to the National Agricultural Statistics Service. (Photo by Catrina Rawson) 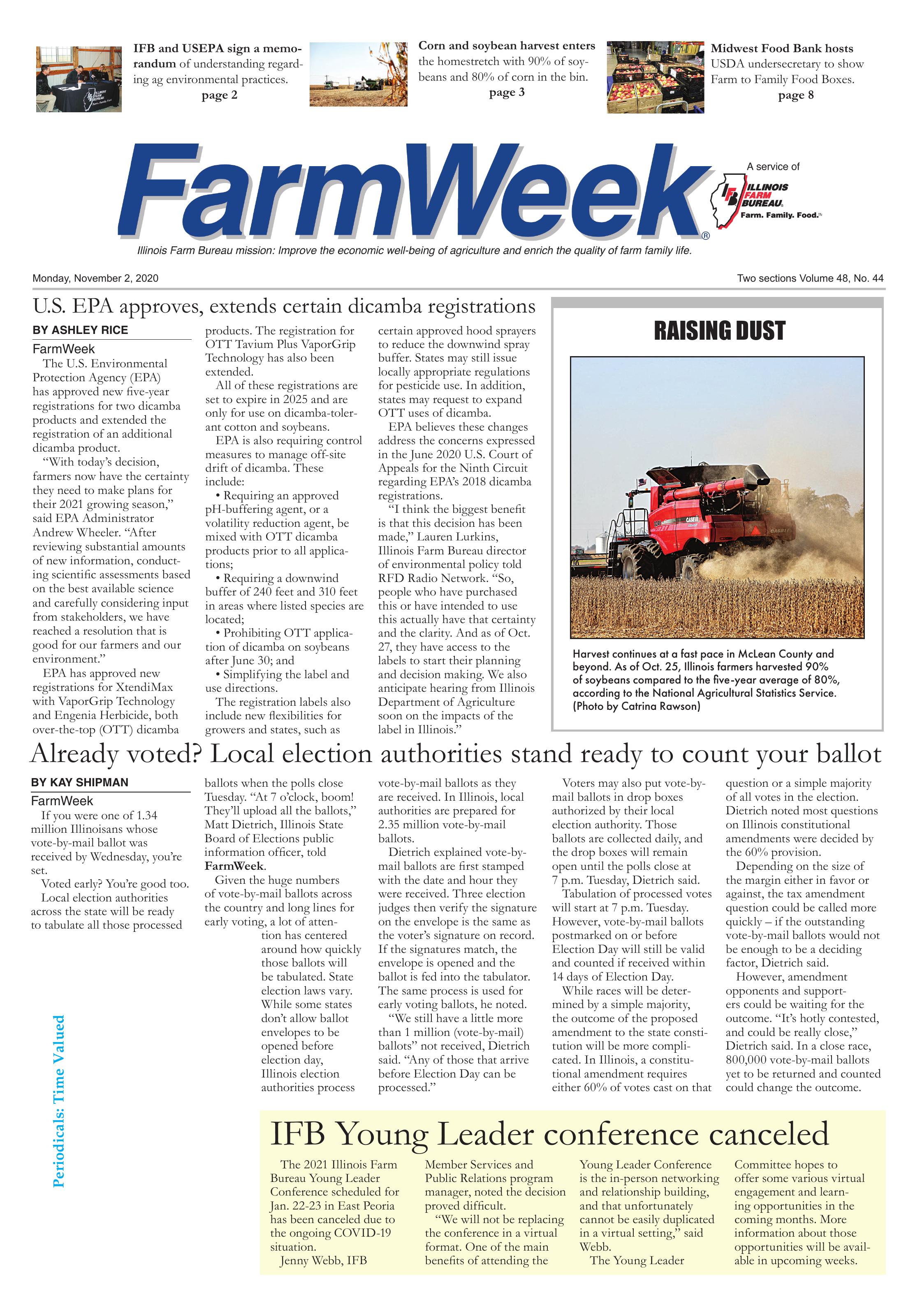