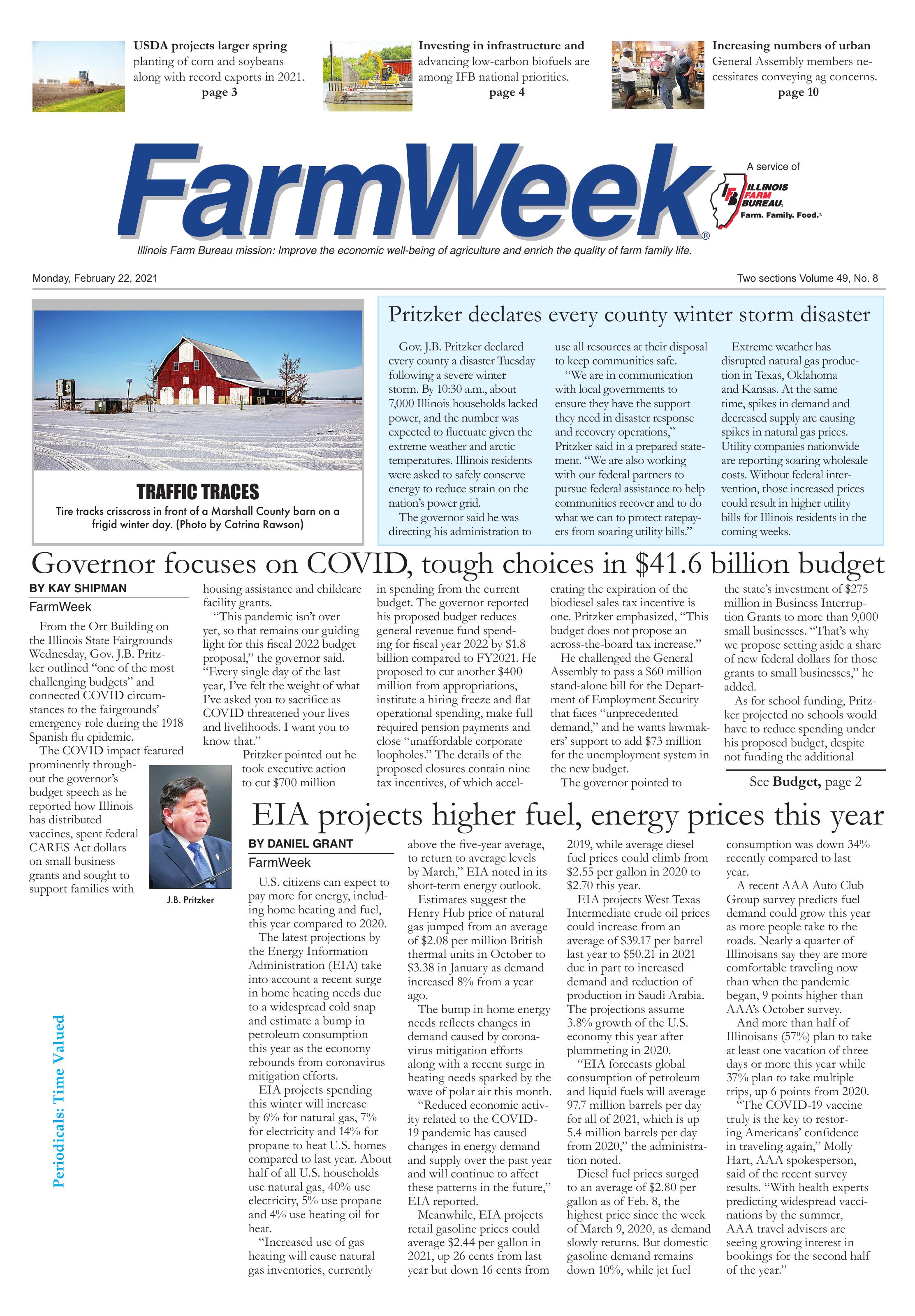 Gov. J.B. Pritzker declared every county a disaster Tuesday following a severe winter storm. By 10:30 a.m., about 7,000 Illinois households lacked power, and the number was expected to fluctuate given the extreme weather and arctic temperatures. Illinois residents were asked to safely conserve energy to reduce strain on the nation’s power grid.

The governor said he was directing his administration to use all resources at their disposal to keep communities safe.

“We are in communication with local governments to ensure they have the support they need in disaster response and recovery operations,” Pritzker said in a prepared statement. “We are also working with our federal partners to pursue federal assistance to help communities recover and to do what we can to protect ratepayers from soaring utility bills.”

Extreme weather has disrupted natural gas production in Texas, Oklahoma and Kansas. At the same time, spikes in demand and decreased supply are causing spikes in natural gas prices. Utility companies nationwide are reporting soaring wholesale costs. Without federal intervention, those increased prices could result in higher utility bills for Illinois residents in the coming weeks.

From the Orr Building on the Illinois State Fairgrounds Wednesday, Gov. J.B. Pritzker outlined “one of the most challenging budgets” and connected COVID circumstances to the fairgrounds’ emergency role during the 1918 Spanish flu epidemic.

The COVID impact featured prominently throughout the governor’s budget speech as he reported how Illinois has distributed vaccines, spent federal CARES Act dollars on small business grants and sought to support families with housing assistance and childcare facility grants.

“This pandemic isn’t over yet, so that remains our guiding light for this fiscal 2022 budget proposal,” the governor said. “Every single day of the last year, I’ve felt the weight of what I’ve asked you to sacrifice as COVID threatened your lives and livelihoods. I want you to know that.”

Pritzker pointed out he took executive action to cut $700 million in spending from the current budget. The governor reported his proposed budget reduces general revenue fund spending for fiscal year 2022 by $1.8 billion compared to FY2021. He proposed to cut another $400 million from appropriations, institute a hiring freeze and flat operational spending, make full required pension payments and close “unaffordable corporate loopholes.” The details of the proposed closures contain nine tax incentives, of which accelerating the expiration of the biodiesel sales tax incentive is one. Pritzker emphasized, “This budget does not propose an across-the-board tax increase.”

He challenged the General Assembly to pass a $60 million stand-alone bill for the Department of Employment Security that faces “unprecedented demand,” and he wants lawmakers’ support to add $73 million for the unemployment system in the new budget.

The governor pointed to the state’s investment of $275 million in Business Interruption Grants to more than 9,000 small businesses. “That’s why we propose setting aside a share of new federal dollars for those grants to small businesses,” he added.

As for school funding, Pritzker projected no schools would have to reduce spending under his proposed budget, despite not funding the additional million called for in the state’s school funding formula for FY2022. The federal government has allocated $2.8 billion to support schools thus far and more is expected, according to the governor. “Thanks to this funding, we can protect our K-12 investments at current spending levels,” Pritzker added.

The governor said his budget protects higher education funding. He noted federal COVID relief funding will provide $740 million to post-secondary institutions in the state, so he is proposing a $28 million increase in the monetary award program “for those smart kids who can least afford it.”

The governor fleetingly acknowledged the state’s $4.76 billion in unpaid bills, which are expected to grow to more than $10 billion by June. Essentially, he challenged Congress to return an equal amount of tax dollars paid by Illinois residents, but acknowledged that won’t solve the state’s fiscal challenges. “That’s why any money we receive from the federal government needs to be spent wisely, by paying down borrowing and our bill backlog. Anything remaining must be used to invest in expanding jobs and economic growth,” Pritzker said.

Illinois Farm Bureau President Richard Guebert Jr. agreed with the governor’s statement that the FY2022 budget “will be one of the most challenging budgets this government has ever had to craft.” IFB welcomed Pritzker’s comments that he wants to “enter the process of negotiation with an open mind,” Guebert continued.

As for some of the governor’s proposals, Senate President Don Harmon, D-Oak Park, said, “It’s a fair question to ask, ‘What are the hard-working taxpayers of Illinois getting in return for these corporate tax breaks?’ It’s probably past time to put some of these incentives under the microscope and see what works and get rid of what doesn’t.”

“None of these items are loopholes. They are incentives to grow jobs and educate our children. They do exactly what this governor and previous governors intended them to do,” Durkin said.

“We accept the governor’s call to work together,” Guebert continued, “and we are hopeful that any changes that will be made will be to continue the recognition of the importance of this fuel for the growers of soybeans and the impact that has on the state’s overall economy.”

U.S. citizens can expect to pay more for energy, including home heating and fuel, this year compared to 2020.

The latest projections by the Energy Information Administration (EIA) take into account a recent surge in home heating needs due to a widespread cold snap and estimate a bump in petroleum consumption this year as the economy rebounds from coronavirus mitigation efforts.

EIA projects spending this winter will increase by 6% for natural gas, 7% for electricity and 14% for propane to heat U.S. homes compared to last year. About half of all U.S. households use natural gas, 40% use electricity, 5% use propane and 4% use heating oil for heat.

“Increased use of gas heating will cause natural gas inventories, currently above the five-year average, to return to average levels by March,” EIA noted in its short-term energy outlook.

Estimates suggest the Henry Hub price of natural gas jumped from an average of $2.08 per million British thermal units in October to $3.38 in January as demand increased 8% from a year ago.

The bump in home energy needs reflects changes in demand caused by coronavirus mitigation efforts along with a recent surge in heating needs sparked by the wave of polar air this month.

“Reduced economic activity related to the COVID-19 pandemic has caused changes in energy demand and supply over the past year and will continue to affect these patterns in the future,” EIA reported.

EIA projects West Texas Intermediate crude oil prices could increase from an average of $39.17 per barrel last year to $50.21 in 2021 due in part to increased demand and reduction of production in Saudi Arabia. The projections assume 3.8% growth of the U.S. economy this year after plummeting in 2020.

Diesel fuel prices surged to an average of $2.80 per gallon as of Feb. 8, the highest price since the week of March 9, 2020, as demand slowly returns. But domestic gasoline demand remains down 10%, while jet fuel consumption was down 34% recently compared to last year.

A recent AAA Auto Club Group survey predicts fuel demand could grow this year as more people take to the roads. Nearly a quarter of Illinoisans say they are more comfortable traveling now than when the pandemic began, 9 points higher than AAA’s October survey.

And more than half of Illinoisans (57%) plan to take at least one vacation of three days or more this year while 37% plan to take multiple trips, up 6 points from 2020.

“The COVID-19 vaccine truly is the key to restoring Americans’ confidence in traveling again,” Molly Hart, AAA spokesperson, said of the recent survey results. “With health experts predicting widespread vaccinations by the summer, AAA travel advisers are seeing growing interest in bookings for the second half of the year.” 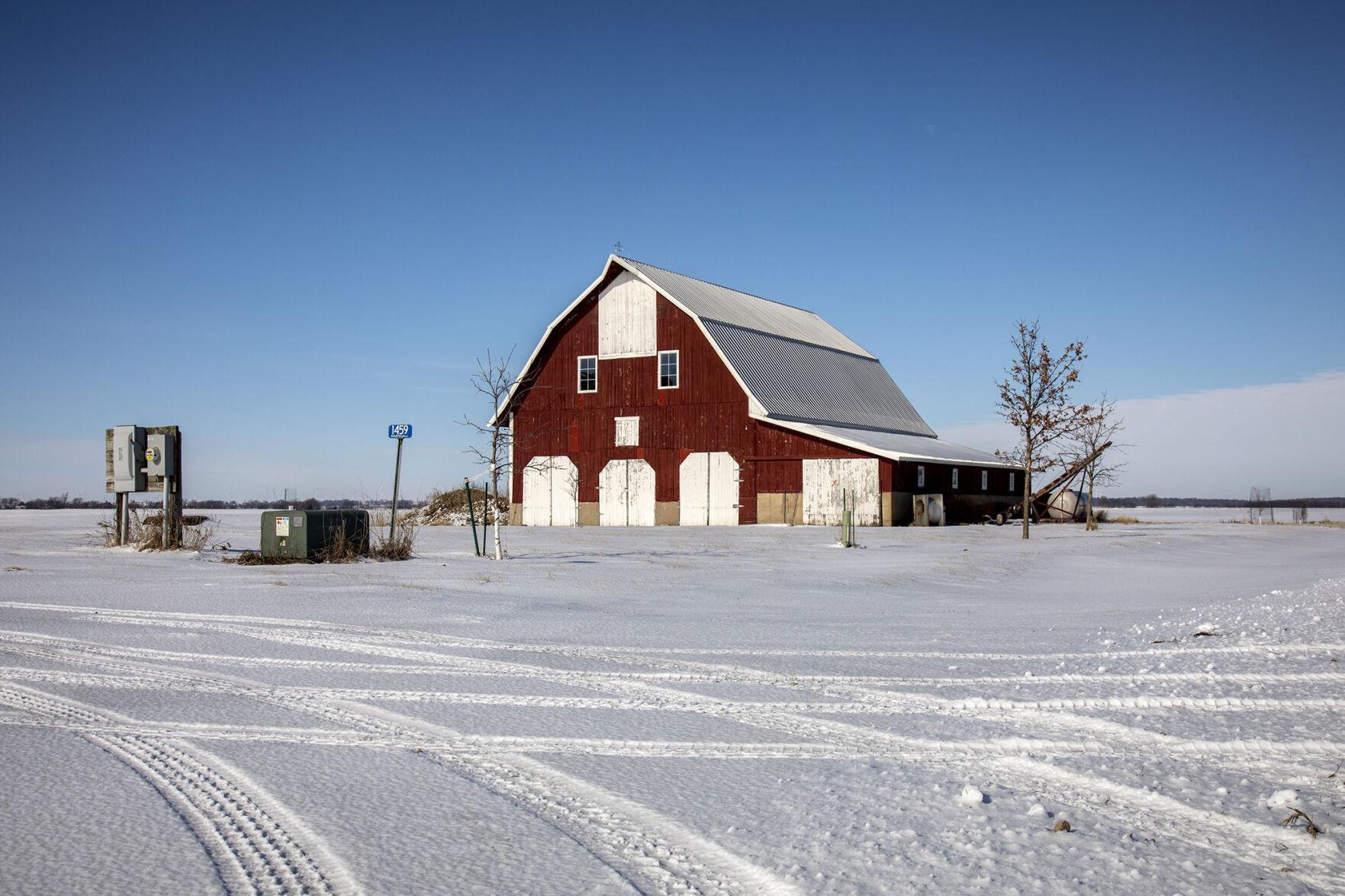 Tire tracks crisscross in front of a Marshall County barn on a frigid winter day. (Photo by Catrina Rawson)