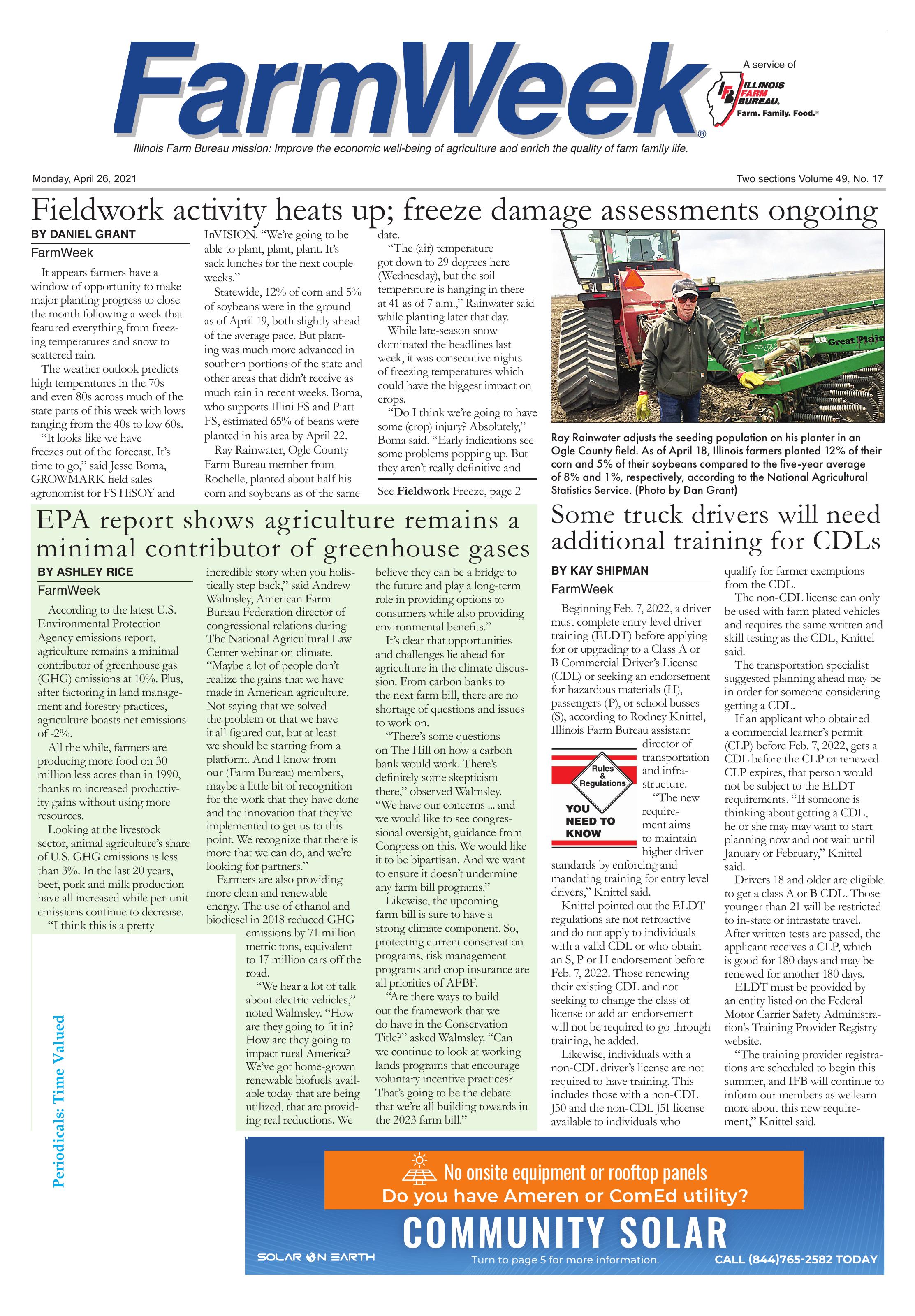 Ray Rainwater adjusts the seeding population on his planter in an Ogle County field. As of April 18, Illinois farmers planted 12% of their corn and 5% of their soybeans compared to the five-year average of 8% and 1%, respectively, according to the National Agricultural Statistics Service. (Photo by Dan Grant)

It appears farmers have a window of opportunity to make major planting progress to close the month following a week that featured everything from freezing temperatures and snow to scattered rain.

The weather outlook predicts high temperatures in the 70s and even 80s across much of the state parts of this week with lows ranging from the 40s to low 60s.

“It looks like we have freezes out of the forecast. It’s time to go,” said Jesse Boma, GROWMARK field sales agronomist for FS HiSOY and InVISION. “We’re going to be able to plant, plant, plant. It’s sack lunches for the next couple weeks.”

Statewide, 12% of corn and 5% of soybeans were in the ground as of April 19, both slightly ahead of the average pace. But planting was much more advanced in southern portions of the state and other areas that didn’t receive as much rain in recent weeks. Boma, who supports Illini FS and Piatt FS, estimated 65% of beans were planted in his area by April 22.

Ray Rainwater, Ogle County Farm Bureau member from Rochelle, planted about half his corn and soybeans as of the same date.

“The (air) temperature got down to 29 degrees here (Wednesday), but the soil temperature is hanging in there at 41 as of 7 a.m.,” Rainwater said while planting later that day.

While late-season snow dominated the headlines last week, it was consecutive nights of freezing temperatures which could have the biggest impact on crops.

“Do I think we’re going to have some (crop) injury? Absolutely,” Boma said. “Early indications see some problems popping up. But they aren’t really definitive and won’t be for at least three to five days. You have to give the crops time to try to rebound.”

Boma expressed the most concern for soybeans planted around Easter and corn that went in the ground just head of the recent freeze.

“For soybeans planted April 5-11, we might have some problems, because they’re emerged (and the growing point is above ground),” Boma said. “If you have treated soybeans in the ground (planted more recently), they should be fine.

“As for corn, it’s a lot more sensitive,” he continued. “You don’t want the ground to be below 50 degrees. It’s all about limiting the time between germination and emergence because the longer time there is in between allows soilborne pathogens to find their way into the corn plant.”

Farmers should scout corn and soybean fields this week and monitor winter wheat. Wheat in the booting to heading stages are most susceptible to freezing temperatures, according to the FS Resource Center at {fssystem.com}.

Five percent of the wheat crop headed as of April 19, while the condition of the crop was rated 69% good to excellent (down 4 points from the previous week), 21% fair and 10% poor to very poor, the National Agricultural Statistics Service Illinois field office reported.

“It remains to be seen (if widespread wheat damage occurred),” Boma added. “Did we get saved by the temperature not dropping much below 31 degrees? Absolutely.”

According to the latest U.S. Environmental Protection Agency emissions report, agriculture remains a minimal contributor of greenhouse gas (GHG) emissions at 10%. Plus, after factoring in land management and forestry practices, agriculture boasts net emissions of -2%.

All the while, farmers are producing more food on 30 million less acres than in 1990, thanks to increased productivity gains without using more resources.

Looking at the livestock sector, animal agriculture’s share of U.S. GHG emissions is less than 3%. In the last 20 years, beef, pork and milk production have all increased while per-unit emissions continue to decrease.

“I think this is a pretty incredible story when you holistically step back,” said Andrew Walmsley, American Farm Bureau Federation director of congressional relations during The National Agricultural Law Center webinar on climate. “Maybe a lot of people don’t realize the gains that we have made in American agriculture. Not saying that we solved the problem or that we have it all figured out, but at least we should be starting from a platform. And I know from our (Farm Bureau) members, maybe a little bit of recognition for the work that they have done and the innovation that they’ve implemented to get us to this point. We recognize that there is more that we can do, and we’re looking for partners.”

Farmers are also providing more clean and renewable energy. The use of ethanol and biodiesel in 2018 reduced GHG emissions by 71 million metric tons, equivalent to 17 million cars off the road.

“We hear a lot of talk about electric vehicles,” noted Walmsley. “How are they going to fit in? How are they going to impact rural America? We’ve got home-grown renewable biofuels available today that are being utilized, that are providing real reductions. We believe they can be a bridge to the future and play a long-term role in providing options to consumers while also providing environmental benefits.”

It’s clear that opportunities and challenges lie ahead for agriculture in the climate discussion. From carbon banks to the next farm bill, there are no shortage of questions and issues to work on.

“There’s some questions on The Hill on how a carbon bank would work. There’s definitely some skepticism there,” observed Walmsley. “We have our concerns ... and we would like to see congressional oversight, guidance from Congress on this. We would like it to be bipartisan. And we want to ensure it doesn’t undermine any farm bill programs.”

Likewise, the upcoming farm bill is sure to have a strong climate component. So, protecting current conservation programs, risk management programs and crop insurance are all priorities of AFBF.

“Are there ways to build out the framework that we do have in the Conservation Title?” asked Walmsley. “Can we continue to look at working lands programs that encourage voluntary incentive practices? That’s going to be the debate that we’re all building towards in the 2023 farm bill.”

Beginning Feb. 7, 2022, a driver must complete entry-level driver training (ELDT) before applying for or upgrading to a Class A or B Commercial Driver’s License (CDL) or seeking an endorsement for hazardous materials (H), passengers (P), or school busses (S), according to Rodney Knittel, Illinois Farm Bureau assistant director of transportation and infrastructure.

Knittel pointed out the ELDT regulations are not retroactive and do not apply to individuals with a valid CDL or who obtain an S, P or H endorsement before Feb. 7, 2022. Those renewing their existing CDL and not seeking to change the class of license or add an endorsement will not be required to go through training, he added.

The non-CDL license can only be used with farm plated vehicles and requires the same written and skill testing as the CDL, Knittel said.

The transportation specialist suggested planning ahead may be in order for someone considering getting a CDL.

If an applicant who obtained a commercial learner’s permit (CLP) before Feb. 7, 2022, gets a CDL before the CLP or renewed CLP expires, that person would not be subject to the ELDT requirements. “If someone is thinking about getting a CDL, he or she may may want to start planning now and not wait until January or February,” Knittel said.

Drivers 18 and older are eligible to get a class A or B CDL. Those younger than 21 will be restricted to in-state or intrastate travel. After written tests are passed, the applicant receives a CLP, which is good for 180 days and may be renewed for another 180 days.

ELDT must be provided by an entity listed on the Federal Motor Carrier Safety Administration’s Training Provider Registry website.

“The training provider registrations are scheduled to begin this summer, and IFB will continue to inform our members as we learn more about this new requirement,” Knittel said.