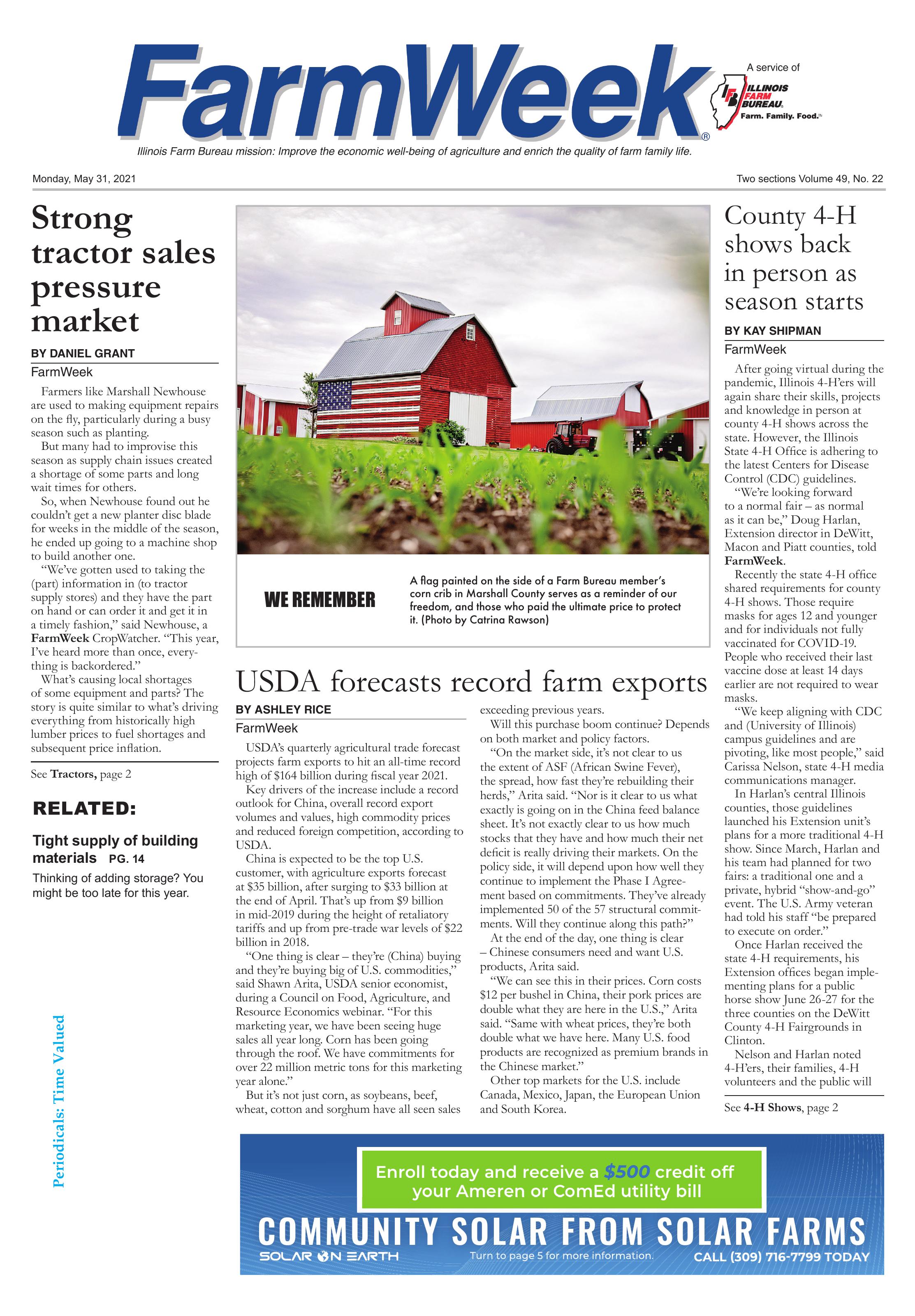 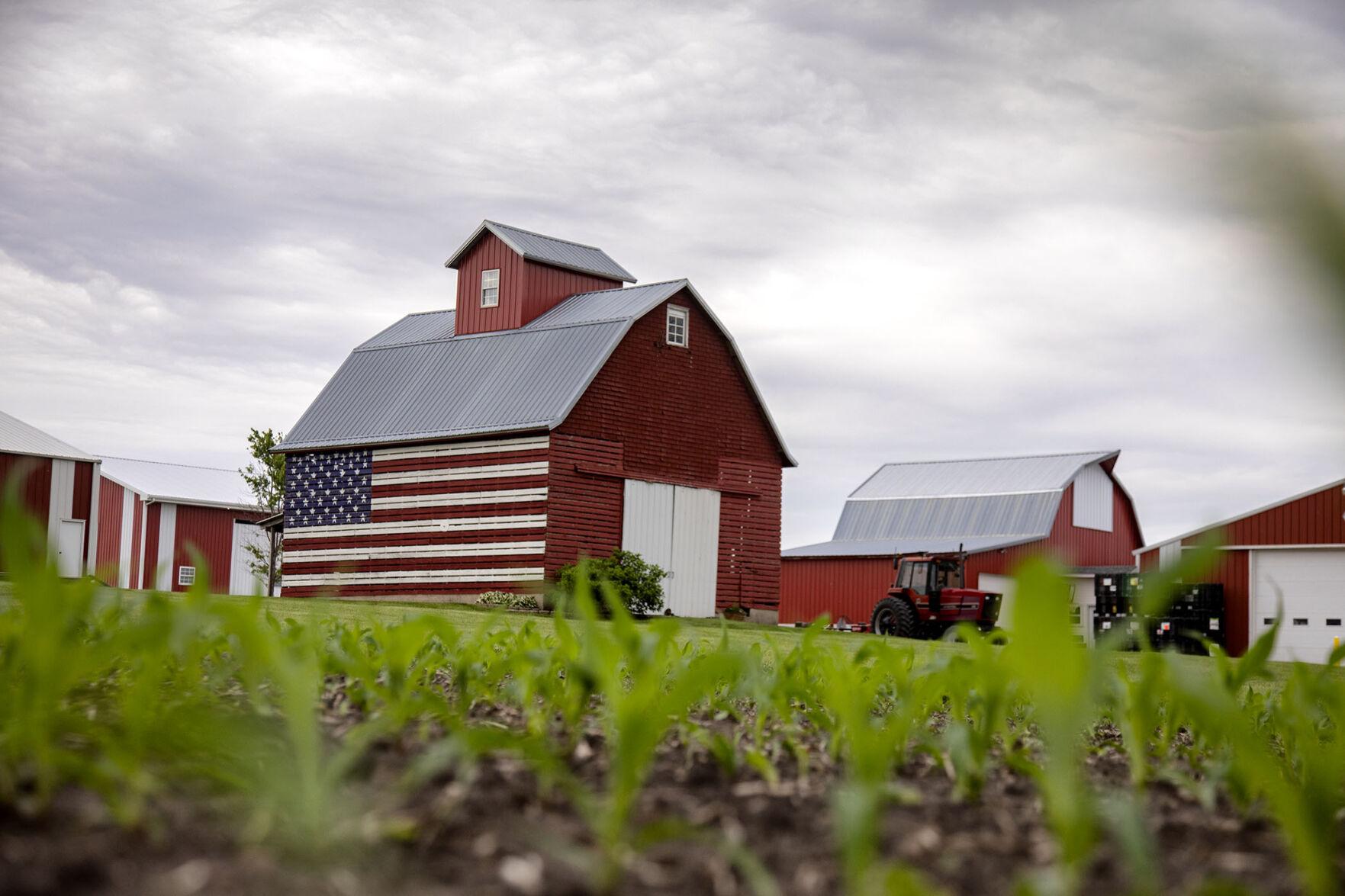 A flag painted on the side of a Farm Bureau member’s corn crib in Marshall County serves as a reminder of our freedom, and those who paid the ultimate price to protect it. (Photo by Catrina Rawson)

U.S. corn, soybeans, beef and wheat have seen significant accumulated net sales to China in the current year as compared to the previous year and 5-year average.

Key drivers of the increase include a record outlook for China, overall record export volumes and values, high commodity prices and reduced foreign competition, according to USDA.

China is expected to be the top U.S. customer, with agriculture exports forecast at $35 billion, after surging to $33 billion at the end of April. That’s up from $9 billion in mid-2019 during the height of retaliatory tariffs and up from pre-trade war levels of $22 billion in 2018.

“One thing is clear – they’re (China) buying and they’re buying big of U.S. commodities,” said Shawn Arita, USDA senior economist, during a Council on Food, Agriculture, and Resource Economics webinar. “For this marketing year, we have been seeing huge sales all year long. Corn has been going through the roof. We have commitments for over 22 million metric tons for this marketing year alone.”

But it’s not just corn, as soybeans, beef, wheat, cotton and sorghum have all seen sales exceeding previous years.

Will this purchase boom continue? Depends on both market and policy factors.

“On the market side, it’s not clear to us the extent of ASF (African Swine Fever), the spread, how fast they’re rebuilding their herds,” Arita said. “Nor is it clear to us what exactly is going on in the China feed balance sheet. It’s not exactly clear to us how much stocks that they have and how much their net deficit is really driving their markets. On the policy side, it will depend upon how well they continue to implement the Phase I Agreement based on commitments. They’ve already implemented 50 of the 57 structural commitments. Will they continue along this path?”

At the end of the day, one thing is clear – Chinese consumers need and want U.S. products, Arita said.

“We can see this in their prices. Corn costs $12 per bushel in China, their pork prices are double what they are here in the U.S.,” Arita said. “Same with wheat prices, they’re both double what we have here. Many U.S. food products are recognized as premium brands in the Chinese market.”

Other top markets for the U.S. include Canada, Mexico, Japan, the European Union and South Korea.

State
County 4-H shows back in person as season starts

After going virtual during the pandemic, Illinois 4-H’ers will again share their skills, projects and knowledge in person at county 4-H shows across the state. However, the Illinois State 4-H Office is adhering to the latest Centers for Disease Control (CDC) guidelines.

“We’re looking forward to a normal fair – as normal as it can be,” Doug Harlan, Extension director in DeWitt, Macon and Piatt counties, told FarmWeek.

Recently the state 4-H office shared requirements for county 4-H shows. Those require masks for ages 12 and younger and for individuals not fully vaccinated for COVID-19. People who received their last vaccine dose at least 14 days earlier are not required to wear masks.

“We keep aligning with CDC and (University of Illinois) campus guidelines and are pivoting, like most people,” said Carissa Nelson, state 4-H media communications manager.

In Harlan’s central Illinois counties, those guidelines launched his Extension unit’s plans for a more traditional 4-H show. Since March, Harlan and his team had planned for two fairs: a traditional one and a private, hybrid “show-and-go” event. The U.S. Army veteran had told his staff “be prepared to execute on order.”

Once Harlan received the state 4-H requirements, his Extension offices began implementing plans for a public horse show June 26-27 for the three counties on the DeWitt County 4-H Fairgrounds in Clinton.

Nelson and Harlan noted 4-H’ers, their families, 4-H volunteers and the public will be on the honor system regarding self-reported vaccination status. Extension staff will not verify vaccination records.

This summer marks the first time 4-H’ers from DeWitt, Macon and Piatt counties will show livestock and general projects in a single fair. The three-county event will be July 9-12 on the DeWitt County 4-H Fairgrounds.

“We don’t know what the (exhibitor) numbers will look like. We hope people come and show their projects,” Harlan said.

Both the horse show and the fair will be open to the public with no attendance restrictions. Harlan anticipated the return of “regular fair events,” such as showmanship contests, award ceremonies and fun events for kids. “The food stand will be open,” he added.

With 4-H families and volunteers looking forward to in-person summer fairs and activities, Nelson thanked them for persevering in a difficult time of virtual exhibitions and activities. “We appreciate your continued support this past year,” she said. “The focus was on protecting the health of our 4-H community.”

Farmers like Marshall Newhouse are used to making equipment repairs on the fly, particularly during a busy season such as planting.

But many had to improvise this season as supply chain issues created a shortage of some parts and long wait times for others.

So, when Newhouse found out he couldn’t get a new planter disc blade for weeks in the middle of the season, he ended up going to a machine shop to build another one.

“We’ve gotten used to taking the (part) information in (to tractor supply stores) and they have the part on hand or can order it and get it in a timely fashion,” said Newhouse, a FarmWeek CropWatcher. “This year, I’ve heard more than once, everything is backordered.”

What’s causing local shortages of some equipment and parts? The story is quite similar to what’s driving everything from historically high lumber prices to fuel shortages and subsequent price inflation.

“We’re dealing with a lot of issues at the same time,” said Curt Blades, senior vice president of agriculture services and forestry for the Association of Equipment Manufacturers (AEM). “Demand (for equipment) is higher than it’s been in some time, but the real driver across all manufacturing is supply chain shortages.

“The pandemic created supply chain disruptions all across the world,” he continued. “We’re seeing it in shortages of transportation (due to a lack of truck drivers), steel and labor. It’s going to take a couple months or longer to work through the problems.”

“We’re looking at some really good (sales) numbers,” Blades said. “We were operating in a replacement market the last five years. But, as we saw the storm clouds pass (due in part to higher commodity prices), it pointed to farmer attitudes being positive and investments in capital equipment.”

A key driver of the surge in tractor sales also stems from more rural lifestyle consumers and suburban landowners making purchases during the pandemic. Sales of under-40 horsepower tractors are up 43% through April this year compared to a 12% increase in four-wheel drive tractors.

Strong demand continues in the used equipment market as well and caused some farmers near retirement to list equipment sooner than planned to take advantage of the supply shortage, according to Mark Stock, CEO of Big Iron online auctions.

“Because of COVID, we had a spike in attendance of online auctions,” Stock told the RFD Radio Network. “Now that there’s a shortage of equipment you can’t get new from the dealer, we’re seeing another spike for people wanting to buy (used) equipment.”

Supply shortages and high prices could also play a role in thefts of equipment parts, with GPS units among the key targets.

The McHenry County Sheriff’s Office put out a warning to farmers last month after a number of GPS units were stolen from tractors in northeast Illinois, particularly John Deere Starfire GPS receivers. Thefts of those units have been reported from the U.S. and Canada to the United Kingdom.

“People have taken to flying drones to find equipment (parked in rural settings),” said Newhouse, who has a John Deere GPS unit. “Whenever we’re off the farm, the GPS units are locked in the cabs or taken home with us.”

John Deere attempted to deter thefts of its GPS units by adding an enhancement to the user interface of the Starfire 6000 receiver, which uses a code that only provides access to owners of the device.