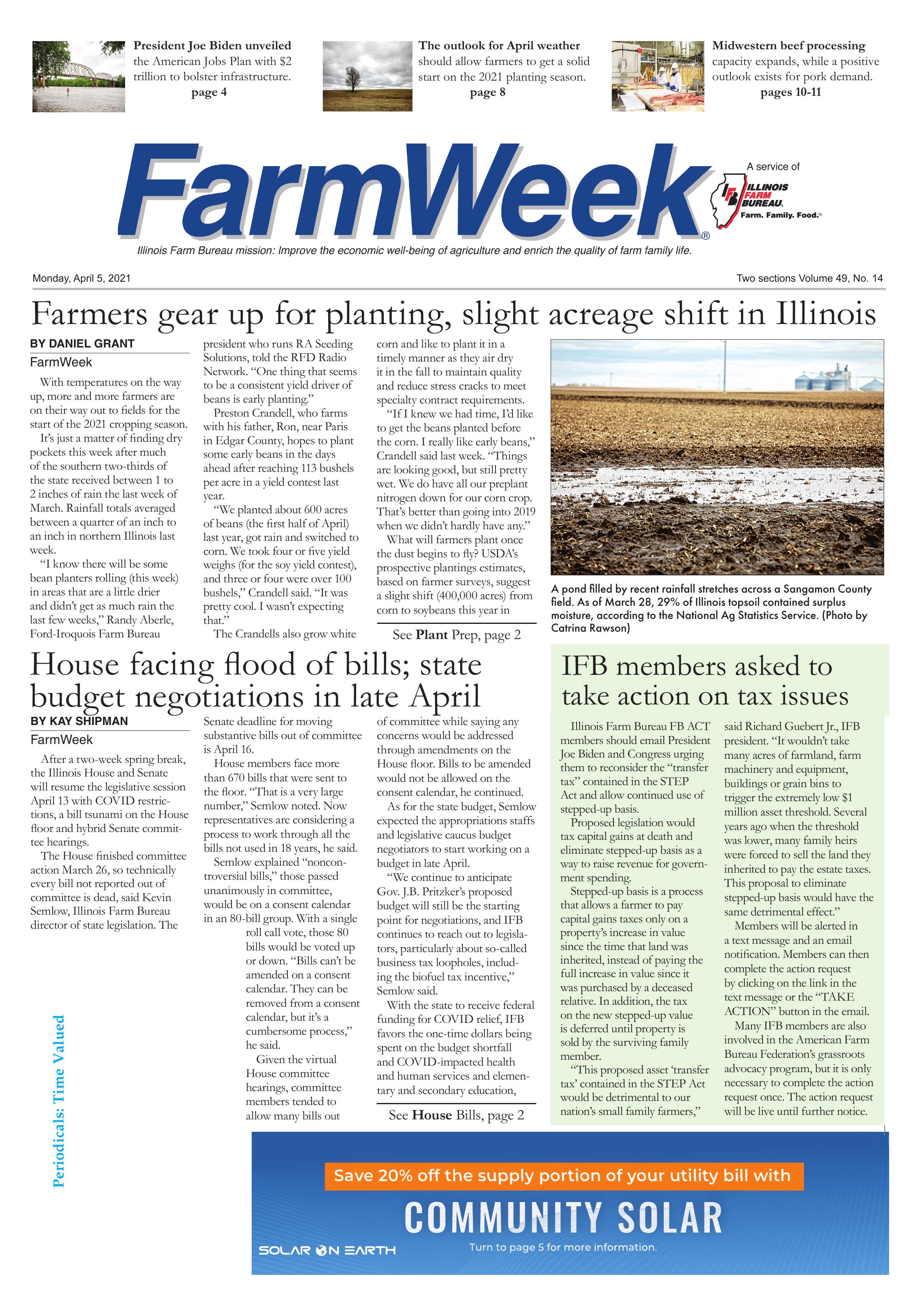 Farmers gear up for planting, slight acreage shift in Illinois

A pond filled by recent rainfall stretches across a Sangamon County field. As of March 28, 29% of Illinois topsoil contained surplus moisture, according to the National Ag Statistics Service. (Photo by Catrina Rawson)

With temperatures on the way up, more and more farmers are on their way out to fields for the start of the 2021 cropping season.

It’s just a matter of finding dry pockets this week after much of the southern two-thirds of the state received between 1 to 2 inches of rain the last week of March. Rainfall totals averaged between a quarter of an inch to an inch in northern Illinois last week.

“I know there will be some bean planters rolling (this week) in areas that are a little drier and didn’t get as much rain the last few weeks,” Randy Aberle, Ford-Iroquois Farm Bureau president who runs RA Seeding Solutions, told the RFD Radio Network. “One thing that seems to be a consistent yield driver of beans is early planting.”

Preston Crandell, who farms with his father, Ron, near Paris in Edgar County, hopes to plant some early beans in the days ahead after reaching 113 bushels per acre in a yield contest last year.

“We planted about 600 acres of beans (the first half of April) last year, got rain and switched to corn. We took four or five yield weighs (for the soy yield contest), and three or four were over 100 bushels,” Crandell said. “It was pretty cool. I wasn’t expecting that.”

The Crandells also grow white corn and like to plant it in a timely manner as they air dry it in the fall to maintain quality and reduce stress cracks to meet specialty contract requirements.

“If I knew we had time, I’d like to get the beans planted before the corn. I really like early beans,” Crandell said last week. “Things are looking good, but still pretty wet. We do have all our preplant nitrogen down for our corn crop. That’s better than going into 2019 when we didn’t hardly have any.”

What will farmers plant once the dust begins to fly? USDA’s prospective plantings estimates, based on farmer surveys, suggest a slight shift (400,000 acres) from corn to soybeans this year in Illinois, which would put plantings at 10.9 million acres of corn and 10.7 million acres of beans across the state.

“After being very heavy corn, we added a few more beans (to the rotation) the last few years,” said Ryan Frieders, a FarmWeek CropWatcher from DeKalb County near Waterman. “The University of Illinois still says beans are more likely to be profitable this year. But farm-wise and with our harvest capacity, we’re sticking with a two-thirds corn, one-third soybeans rotation.”

“I think the wheat looks very good in our area,” Frieders said. “There doesn’t look to be a lot of winterkill. Overall, I think the snow helped protect the growing plants when we had the cold temperatures in February.”

CropWatcher reports, which started for the season in this week’s FarmWeek, can also be viewed, along with CropWatcher 2.0 reports, online at {farmweeknow.com}.

After a two-week spring break, the Illinois House and Senate will resume the legislative session April 13 with COVID restrictions, a bill tsunami on the House floor and hybrid Senate committee hearings.

House members face more than 670 bills that were sent to the floor. “That is a very large number,” Semlow noted. Now representatives are considering a process to work through all the bills not used in 18 years, he said.

Given the virtual House committee hearings, committee members tended to allow many bills out of committee while saying any concerns would be addressed through amendments on the House floor. Bills to be amended would not be allowed on the consent calendar, he continued.

As for the state budget, Semlow expected the appropriations staffs and legislative caucus budget negotiators to start working on a budget in late April.

“We continue to anticipate Gov. J.B. Pritzker’s proposed budget will still be the starting point for negotiations, and IFB continues to reach out to legislators, particularly about so-called business tax loopholes, including the biofuel tax incentive,” Semlow said.

With the state to receive federal funding for COVID relief, IFB favors the one-time dollars being spent on the budget shortfall and COVID-impacted health and human services and elementary and secondary education, according to Semlow. “We hope the federal dollars are not used for new programs because that is a one-time influx,” he added.

In the bill process, new IFB policy approved at the 2020 annual meeting is addressed in HB 2863, sponsored by Rep. Dan Swanson, R-Alpha. The bill would create an appeal process for a landowner or occupant denied permission by a highway authority to build ditches, drains, tracks, rails, poles, wires, pipelines or other equipment along any highway or road. The language clarifies the appeal process to a county superintendent of highways. The House Transportation Regulation, Roads & Bridges Committee passed the bill on a 9-3 vote. IFB is working with the County Engineers Association and county highway commissioners on potential sticking points.

On Wednesday, the Senate Judiciary Committee heard testimony on SB 458 that would limit the legal liability of agritourism businesses.

As proposed, an agritourism operator would not be liable for a participant’s injury or death caused by inherent risks of agritourism activities if required warnings are posted. IFB and the Illinois Specialty Growers Association support the legislation.

IFB opposes a bill that would put school consolidation questions directly on the ballot. HB 7, sponsored by Rep. Rita Mayfield, D-Waukegan, would create a commission that would recommend “beneficial” school consolidations and report to the governor and General Assembly. If the commission adopts its report and recommended consolidations, after a long and detailed process, the proposed consolidation would be put on the ballots. The House Elementary and Secondary Education: Administration, Licensing and Charter School Committee unanimously passed the bill, which is on second reading.

Illinois Farm Bureau FB ACT members should email President Joe Biden and Congress urging them to reconsider the “transfer tax” contained in the STEP Act and allow continued use of stepped-up basis.

Proposed legislation would tax capital gains at death and eliminate stepped-up basis as a way to raise revenue for government spending.

Stepped-up basis is a process that allows a farmer to pay capital gains taxes only on a property’s increase in value since the time that land was inherited, instead of paying the full increase in value since it was purchased by a deceased relative. In addition, the tax on the new stepped-up value is deferred until property is sold by the surviving family member.

“This proposed asset ‘transfer tax’ contained in the STEP Act would be detrimental to our nation’s small family farmers,” said Richard Guebert Jr., IFB president. “It wouldn’t take many acres of farmland, farm machinery and equipment, buildings or grain bins to trigger the extremely low $1 million asset threshold. Several years ago when the threshold was lower, many family heirs were forced to sell the land they inherited to pay the estate taxes. This proposal to eliminate stepped-up basis would have the same detrimental effect.”

Members will be alerted in a text message and an email notification. Members can then complete the action request by clicking on the link in the text message or the “TAKE ACTION” button in the email.

Many IFB members are also involved in the American Farm Bureau Federation’s grassroots advocacy program, but it is only necessary to complete the action request once. The action request will be live until further notice.