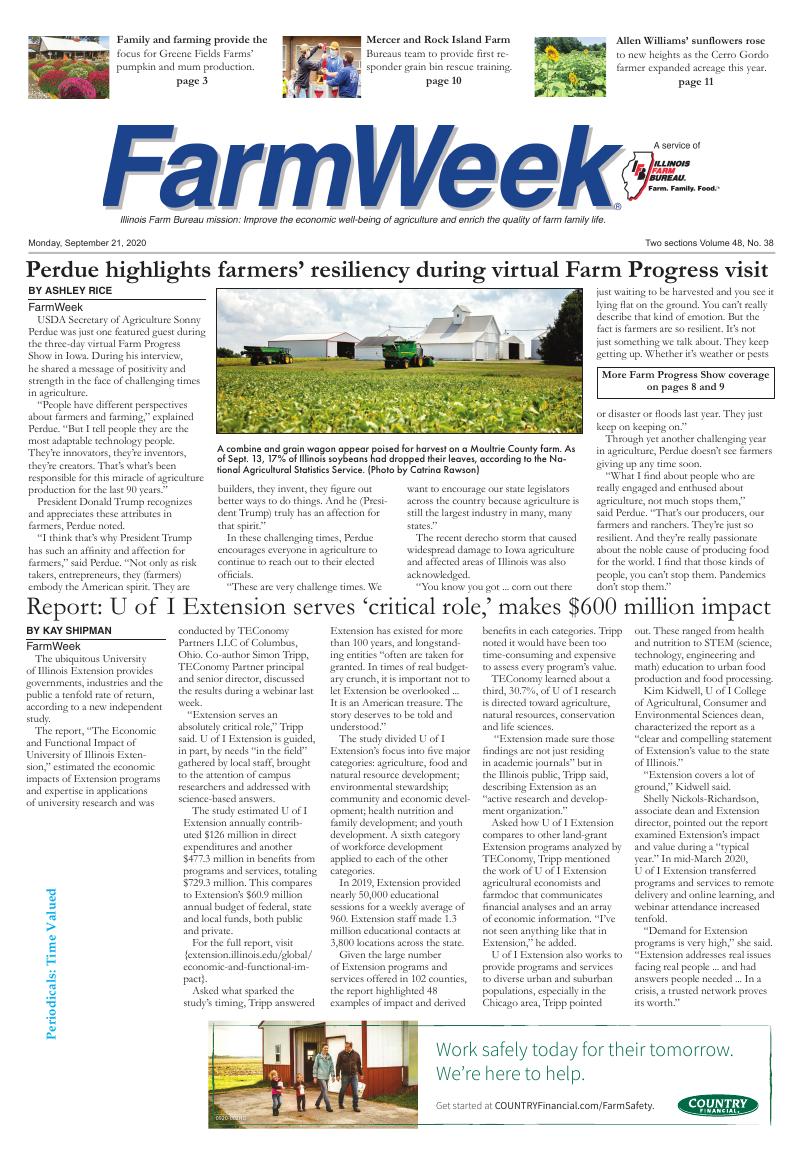 Sonny Perdue: ‘Farmers are so resilient’
By ASHLEY RICE FarmWeek

USDA Secretary of Agriculture Sonny Perdue was just one featured guest during the three-day virtual Farm Progress Show in Iowa. During his interview, he shared a message of positivity and strength in the face of challenging times in agriculture.

“People have different perspectives about farmers and farming,” explained Perdue. “But I tell people they are the most adaptable technology people. They’re innovators, they’re inventors, they’re creators. That’s what’s been responsible for this miracle of agriculture production for the last 90 years.”

“I think that’s why President Trump has such an affinity and affection for farmers,” said Perdue. “Not only as risk takers, entrepreneurs, they (farmers) embody the American spirit. They are builders, they invent, they figure out better ways to do things. And he (President Trump) truly has an affection for that spirit.”

In these challenging times, Perdue encourages everyone in agriculture to continue to reach out to their elected officials.

“These are very challenge times. We want to encourage our state legislators across the country because agriculture is still the largest industry in many, many states.”

The recent derecho storm that caused widespread damage to Iowa agriculture and affected areas of Illinois was also acknowledged.

“You know you got ... corn out there just waiting to be harvested and you see it lying flat on the ground. You can’t really describe that kind of emotion. But the fact is farmers are so resilient. It’s not just something we talk about. They keep getting up. Whether it’s weather or pests or disaster or floods last year. They just keep on keeping on.”

Through yet another challenging year in agriculture, Perdue doesn’t see farmers giving up any time soon.

“What I find about people who are really engaged and enthused about agriculture, not much stops them,” said Perdue. “That’s our producers, our farmers and ranchers. They’re just so resilient. And they’re really passionate about the noble cause of producing food for the world. I find that those kinds of people, you can’t stop them. Pandemics don’t stop them.”

The ubiquitous University of Illinois Extension provides governments, industries and the public a tenfold rate of return, according to a new independent study.

The report, “The Economic and Functional Impact of University of Illinois Extension,” estimated the economic impacts of Extension programs and expertise in applications of university research and was conducted by TEConomy Partners LLC of Columbus, Ohio. Co-author Simon Tripp, TEConomy Partner principal and senior director, discussed the results during a webinar last week.

“Extension serves an absolutely critical role,” Tripp said. U of I Extension is guided, in part, by needs “in the field” gathered by local staff, brought to the attention of campus researchers and addressed with science-based answers.

The study estimated U of I Extension annually contributed $126 million in direct expenditures and another $477.3 million in benefits from programs and services, totaling $729.3 million. This compares to Extension’s $60.9 million annual budget of federal, state and local funds, both public and private.

For the full report, visit {extension.illinois.edu/global/economic-and-functional-impact}.

Asked what sparked the study’s timing, Tripp answered Extension has existed for more than 100 years, and longstanding entities “often are taken for granted. In times of real budgetary crunch, it is important not to let Extension be overlooked ... It is an American treasure. The story deserves to be told and understood.”

In 2019, Extension provided nearly 50,000 educational sessions for a weekly average of 960. Extension staff made 1.3 million educational contacts at 3,800 locations across the state.

Given the large number of Extension programs and services offered in 102 counties, the report highlighted 48 examples of impact and derived benefits in each categories. Tripp noted it would have been too time-consuming and expensive to assess every program’s value.

TEConomy learned about a third, 30.7%, of U of I research is directed toward agriculture, natural resources, conservation and life sciences.

“Extension made sure those findings are not just residing in academic journals” but in the Illinois public, Tripp said, describing Extension as an “active research and development organization.”

Asked how U of I Extension compares to other land-grant Extension programs analyzed by TEConomy, Tripp mentioned the work of U of I Extension agricultural economists and farmdoc that communicates financial analyses and an array of economic information. “I’ve not seen anything like that in Extension,” he added.

U of I Extension also works to provide programs and services to diverse urban and suburban populations, especially in the Chicago area, Tripp pointed out. These ranged from health and nutrition to STEM (science, technology, engineering and math) education to urban food production and food processing.

Kim Kidwell, U of I College of Agricultural, Consumer and Environmental Sciences dean, characterized the report as a “clear and compelling statement of Extension’s value to the state of Illinois.”

Shelly Nickols-Richardson, associate dean and Extension director, pointed out the report examined Extension’s impact and value during a “typical year.” In mid-March 2020, U of I Extension transferred programs and services to remote delivery and online learning, and webinar attendance increased tenfold.

“Demand for Extension programs is very high,” she said. “Extension addresses real issues facing real people ... and had answers people needed ... In a crisis, a trusted network proves its worth.” 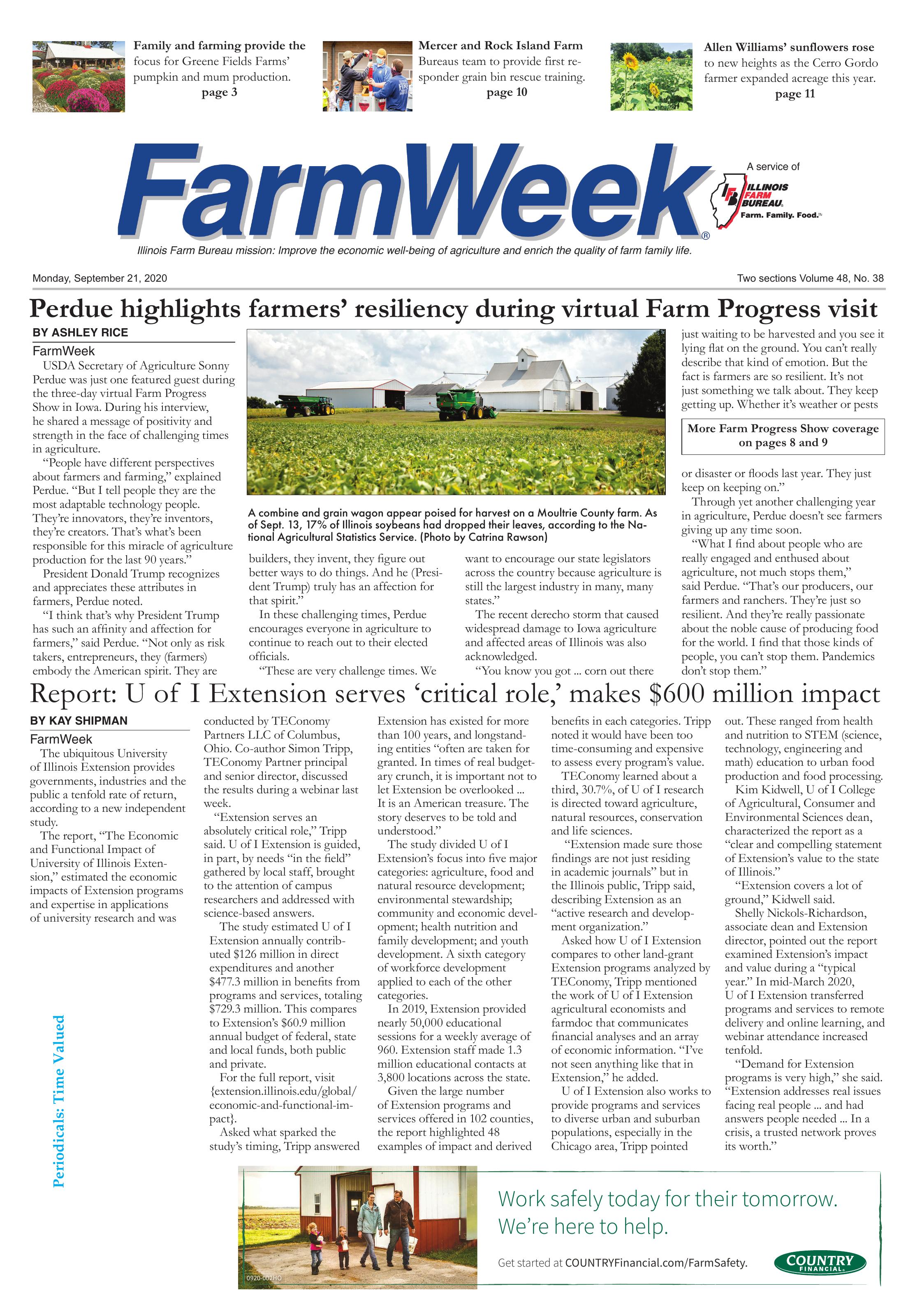