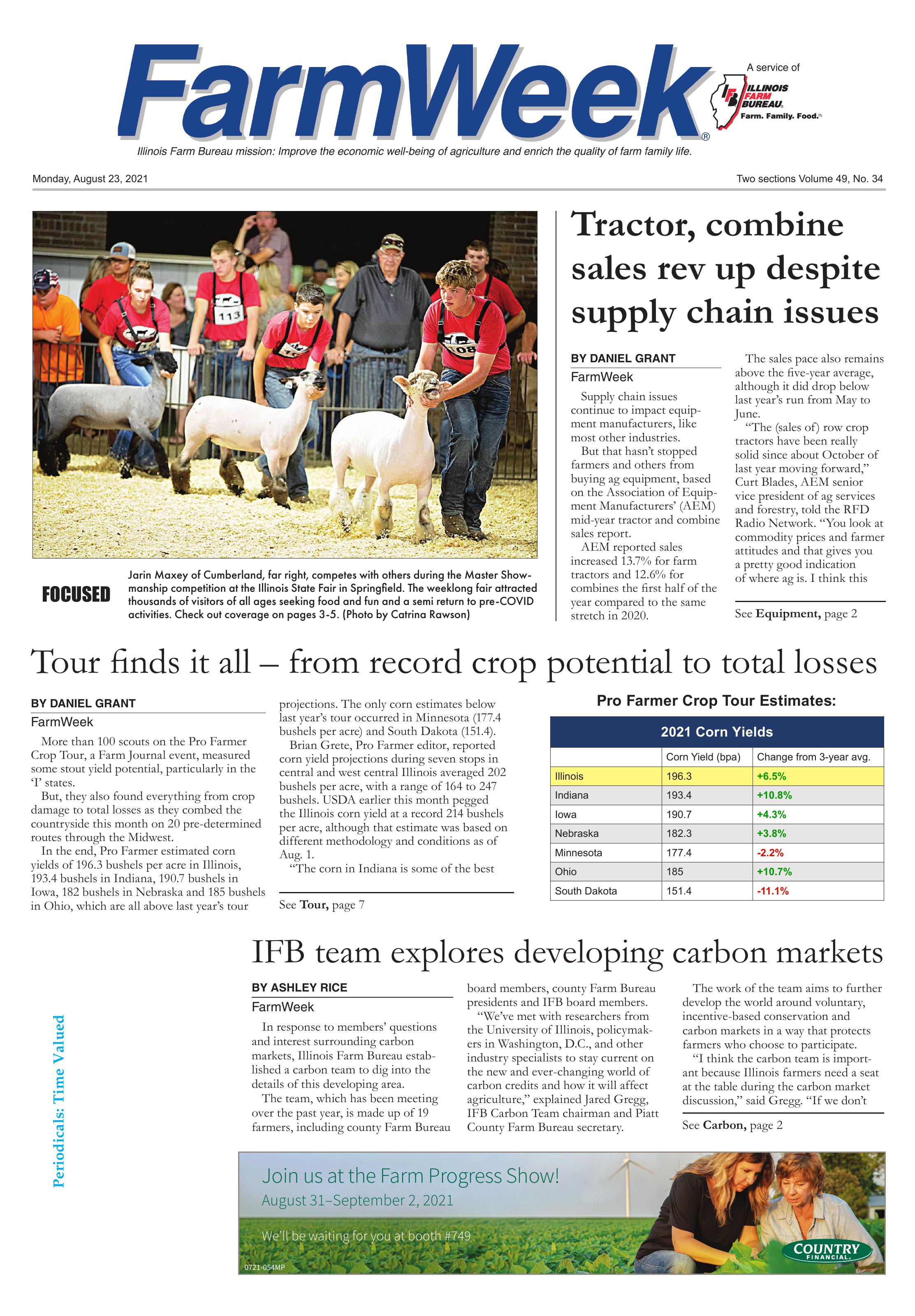 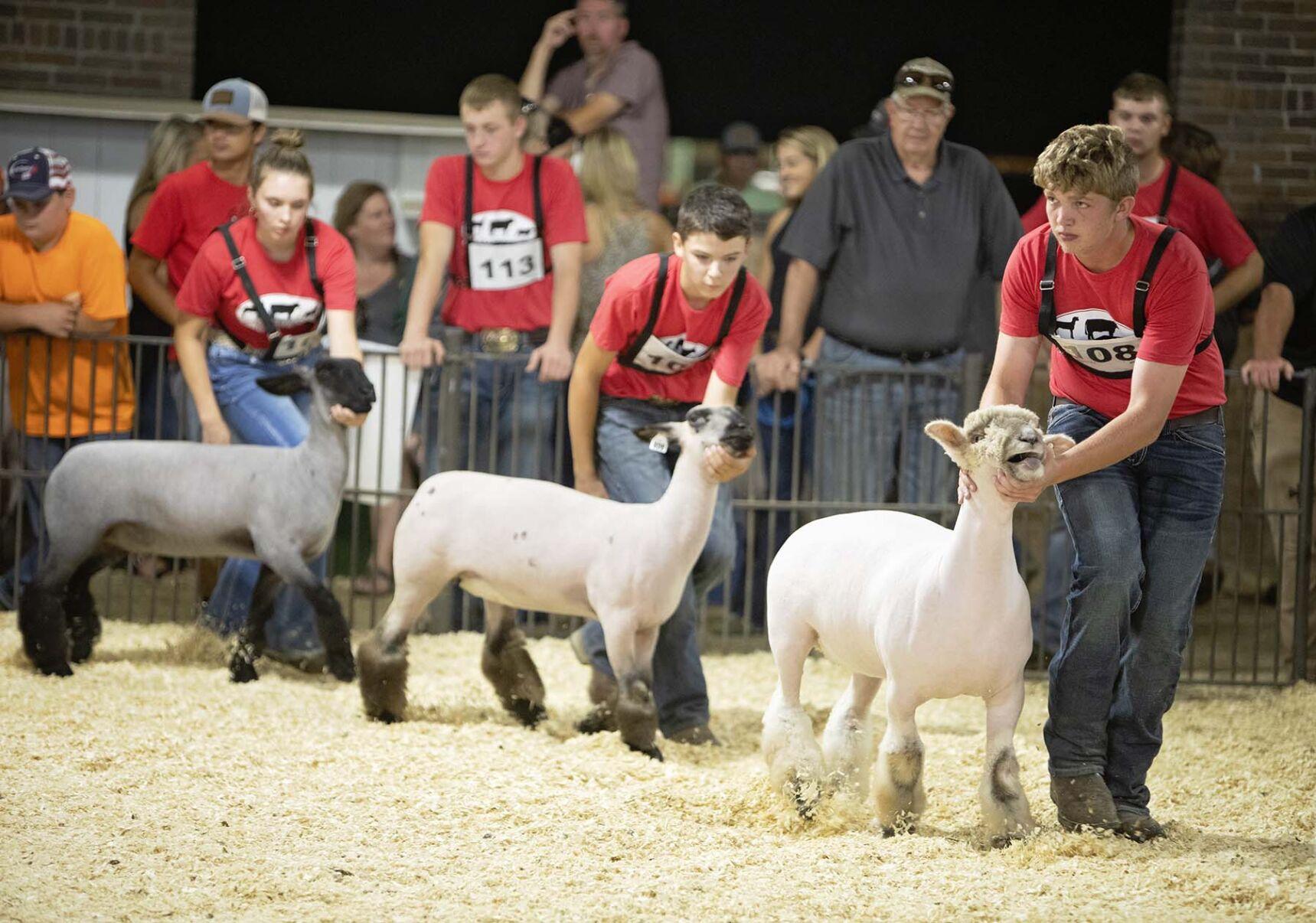 Jarin Maxey of Cumberland, far right, competes with others during the Master Showmanship competition at the Illinois State Fair in Springfield. The weeklong fair attracted thousands of visitors of all ages seeking food and fun and a semi return to pre-COVID activities. Check out coverage on pages 3-5. (Photo by Catrina Rawson)

Andy Wold, left, of Producers Hedge LLC in Leland, and Hannah Kerner, of NASA Harvest at the University of Maryland, scout crops near Bloomington (McLean County) during the Pro Farmer Tour. (Photos by Daniel Grant)

Hannah Kerner, of NASA Harvest at the University of Maryland, examines an ear of corn during the Pro Farmer Tour. (Photo by Daniel Grant)

Andy Wold, of Producers Hedge LLC in Leland, pulls a soybean sample from a McLean County field during the Pro Farmer Tour. The tour estimates pod counts are up 7.4% in the state this year compared to the 3-year tour average. (Photo by Daniel Grant)

More than 100 scouts on the Pro Farmer Crop Tour, a Farm Journal event, measured some stout yield potential, particularly in the ‘I’ states.

But, they also found everything from crop damage to total losses as they combed the countryside this month on 20 pre-determined routes through the Midwest.

Brian Grete, Pro Farmer editor, reported corn yield projections during seven stops in central and west central Illinois averaged 202 bushels per acre, with a range of 164 to 247 bushels. USDA earlier this month pegged the Illinois corn yield at a record 214 bushels per acre, although that estimate was based on different methodology and conditions as of Aug. 1.

“The corn in Indiana is some of the best I’ve seen (there). There’s a lot of 200-bushel corn,” Andy Wold, a tour participant from Producers Hedge LLC in Leland, said during a stop in McLean County east of Bloomington. “But, as we moved to the north and west, the corn is definitely showing stress from the drought.”

Wold, who lives near the border of LaSalle and DeKalb counties, also reported high yield potential in Illinois along with challenging conditions around parts of his area that were hammered by fierce, straight-line winds the second week of August.

“That’s going to be a mess,” he said. “Some fields are near a 100% loss while others are not going to lose as much (yield), but it’s going to make harvest season last longer.”

The Pro Farmer Tour doesn’t project soybean yields with a good portion of the season remaining, but it did estimate soybean pod counts in a 3X3 square averaged 1,279 in Illinois, up 2.6% from last year. USDA pegged the average bean yield in the state at a record 64 bushels per acre.

Soybean pod counts were also up in Iowa and Ohio, compared to last year’s tour, but declined in Indiana, Minnesota, Nebraska and South Dakota.

“Pod counts are all over the board,” said Hannah Kerner, tour participant from NASA Harvest at the University of Maryland. “We had really high numbers and really low numbers.”

Kerner made the trek to join the tour to get a firsthand look at the Midwest crops. NASA Harvest is working on research and tools using satellite data to help farmers make more informed agronomic decisions and to improve food security.

“We see these things from satellite images all the time, but I’ve never been able to walk into all these fields,” Kerner said. “We rely on ground observations to pair with satellite data.”

“What we’re seeing is vegetative health indices look average, but things like precipitation and soil moisture are all way below average,” Kerner said.

In response to members’ questions and interest surrounding carbon markets, Illinois Farm Bureau established a carbon team to dig into the details of this developing area. 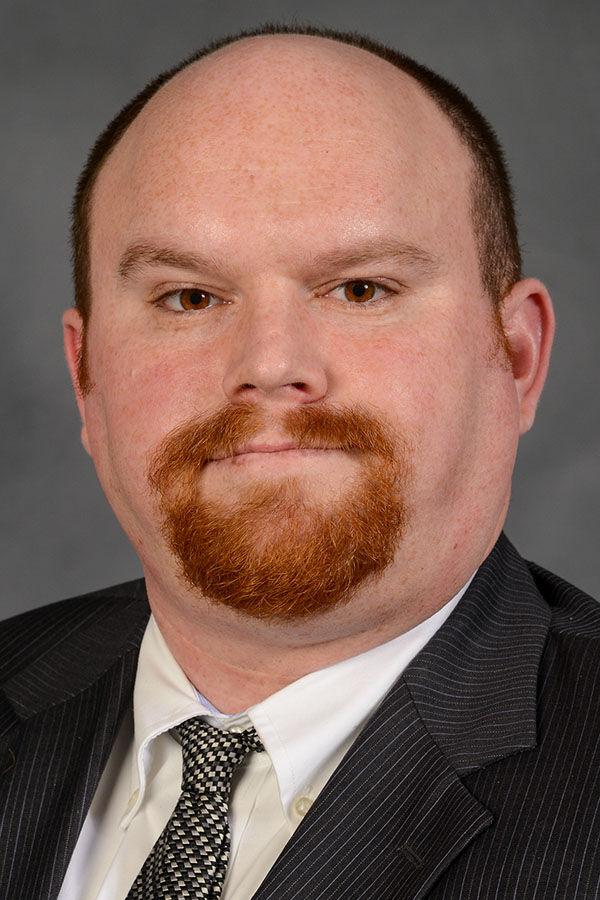 “We’ve met with researchers from the University of Illinois, policymakers in Washington, D.C., and other industry specialists to stay current on the new and ever-changing world of carbon credits and how it will affect agriculture,” explained Jared Gregg, IFB Carbon Team chairman and Piatt County Farm Bureau secretary.

The work of the team aims to further develop the world around voluntary, incentive-based conservation and carbon markets in a way that protects farmers who choose to participate.

“I think the carbon team is important because Illinois farmers need a seat at the table during the carbon market discussion,” said Gregg. “If we don’t educate ourselves on the details and represent our members, someone else will shape the market-based solution for us.” 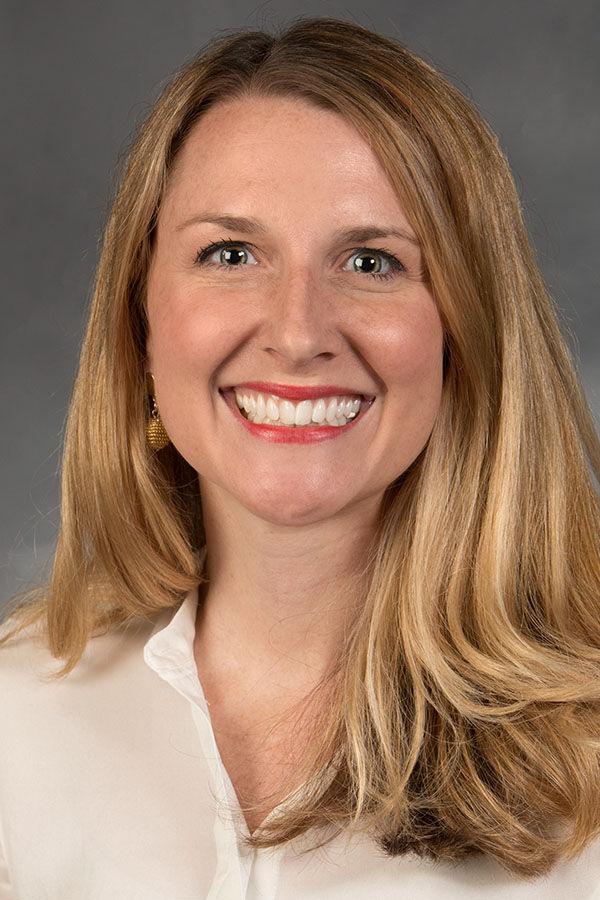 Looking ahead, IFB delegates will have the chance to discuss this issue further at annual meeting. A policy submittal from LaSalle County Farm Bureau spelled out specific desired qualifications for a market-based solution program.

“It is important that IFB remains involved in these discussions to make sure that initiatives remain voluntary, are as beneficial for farmers as possible and provide adequate protections for farmers who do decide to participate,” said Lauren Lurkins, IFB director of environmental policy. “IFB members can expect additional updates as the work of the carbon team continues.”

Supply chain issues continue to impact equipment manufacturers, like most other industries.

But that hasn’t stopped farmers and others from buying ag equipment, based on the Association of Equipment Manufacturers’ (AEM) mid-year tractor and combine sales report.

AEM reported sales increased 13.7% for farm tractors and 12.6% for combines the first half of the year compared to the same stretch in 2020.

The sales pace also remains above the five-year average, although it did drop below last year’s run from May to June.

“The (sales of) row crop tractors have been really solid since about October of last year moving forward,” Curt Blades, AEM senior vice president of ag services and forestry, told the RFD Radio Network. “You look at commodity prices and farmer attitudes and that gives you a pretty good indication of where ag is. I think this (sales trend) is real and not pandemic driven.”

Listen to more from Curt Blades

Four-wheel drive tractor sales jumped the most of any category with a gain of 38.2% the past six months compared to last year.

“You don’t buy a combine or a tractor on a whim,” Blades said. “For farmers to make the purchase, they’ve got to feel pretty good about what their business looks like.”

AEM’s monthly tractor and combine sales reports showed an increase in tractor sales that took off around June and July of last year, although it was to a slightly different market.

“We really started to see strength in the tractor and combine market (at the beginning of summer 2020),” Blades said. “This was driven very much by under 40 horsepower tractors. It was a unique thing that had to do with people investing in their homes and property (during the pandemic). That’s driven the market the last year and a half (prior to the surge in ag sales).”

The uptick in sales continues even as the equipment industry deals with ongoing issues in the supply chain, ranging from a shortage of everything from microchips, steel, labor and transportation to uncomfortably tight supplies of foam seating.

“The supply chain issues are real,” Blades said. “Fortunately, since ag is considered an essential business, a lot of those disruptions we’ve been able to plan for, but it doesn’t make it any easier.”