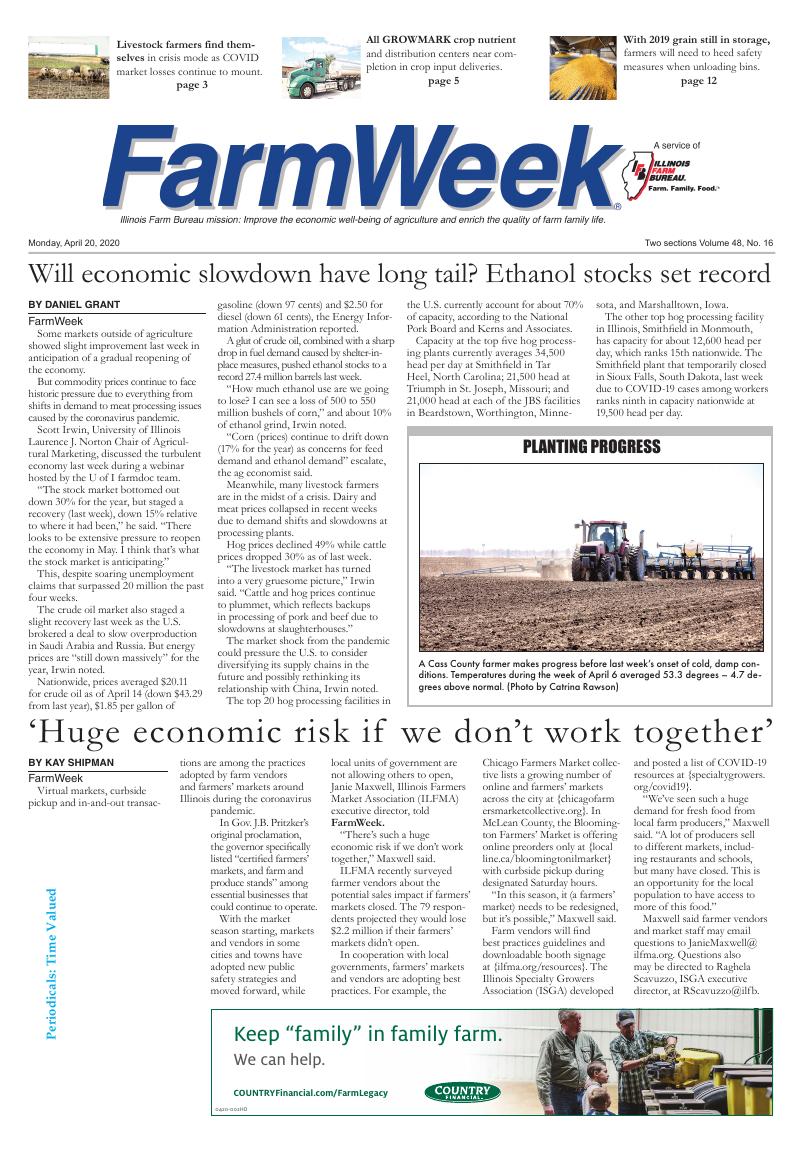 Some markets outside of agriculture showed slight improvement last week in anticipation of a gradual reopening of the economy.

But commodity prices continue to face historic pressure due to everything from shifts in demand to meat processing issues caused by the coronavirus pandemic.

Scott Irwin, University of Illinois Laurence J. Norton Chair of Agricultural Marketing, discussed the turbulent economy last week during a webinar hosted by the U of I farmdoc team.

“The stock market bottomed out down 30% for the year, but staged a recovery (last week), down 15% relative to where it had been,” he said. “There looks to be extensive pressure to reopen the economy in May. I think that’s what the stock market is anticipating.”

This, despite soaring unemployment claims that surpassed 20 million the past four weeks.

The crude oil market also staged a slight recovery last week as the U.S. brokered a deal to slow overproduction in Saudi Arabia and Russia. But energy prices are “still down massively” for the year, Irwin noted.

“Corn (prices) continue to drift down (17% for the year) as concerns for feed demand and ethanol demand” escalate, the ag economist said.

Meanwhile, many livestock farmers are in the midst of a crisis. Dairy and meat prices collapsed in recent weeks due to demand shifts and slowdowns at processing plants.

“The livestock market has turned into a very gruesome picture,” Irwin said. “Cattle and hog prices continue to plummet, which reflects backups in processing of pork and beef due to slowdowns at slaughterhouses.”

The market shock from the pandemic could pressure the U.S. to consider diversifying its supply chains in the future and possibly rethinking its relationship with China, Irwin noted.

The top 20 hog processing facilities in the U.S. currently account for about 70% of capacity, according to the National Pork Board and Kerns and Associates.

Capacity at the top five hog processing plants currently averages 34,500 head per day at Smithfield in Tar Heel, North Carolina; 21,500 head at Triumph in St. Joseph, Missouri; and 21,000 head at each of the JBS facilities in Beardstown, Worthington, Minnesota, and Marshalltown, Iowa.

The other top hog processing facility in Illinois, Smithfield in Monmouth, has capacity for about 12,600 head per day, which ranks 15th nationwide. The Smithfield plant that temporarily closed in Sioux Falls, South Dakota, last week due to COVID-19 cases among workers ranks ninth in capacity nationwide at 19,500 head per day.

Virtual markets, curbside pickup and in-and-out transactions are among the practices adopted by farm vendors and farmers’ markets around Illinois during the coronavirus pandemic.

In Gov. J.B. Pritzker’s original proclamation, the governor specifically listed “certified farmers’ markets, and farm and produce stands” among essential businesses that could continue to operate.

With the market season starting, markets and vendors in some cities and towns have adopted new public safety strategies and moved forward, while local units of government are not allowing others to open, Janie Maxwell, Illinois Farmers Market Association (ILFMA) executive director, told FarmWeek.

“There’s such a huge economic risk if we don’t work together,” Maxwell said.

In cooperation with local governments, farmers’ markets and vendors are adopting best practices. For example, the Chicago Farmers Market collective lists a growing number of online and farmers’ markets across the city at {chicagofarm ersmarketcollective.org}. In McLean County, the Bloomington Farmers’ Market is offering online preorders only at {local line.ca/bloomingtonilmarket} with curbside pickup during designated Saturday hours.

“In this season, it (a farmers’ market) needs to be redesigned, but it’s possible,” Maxwell said.

“We’ve seen such a huge demand for fresh food from local farm producers,” Maxwell said. “A lot of producers sell to different markets, including restaurants and schools, but many have closed. This is an opportunity for the local population to have access to more of this food.” 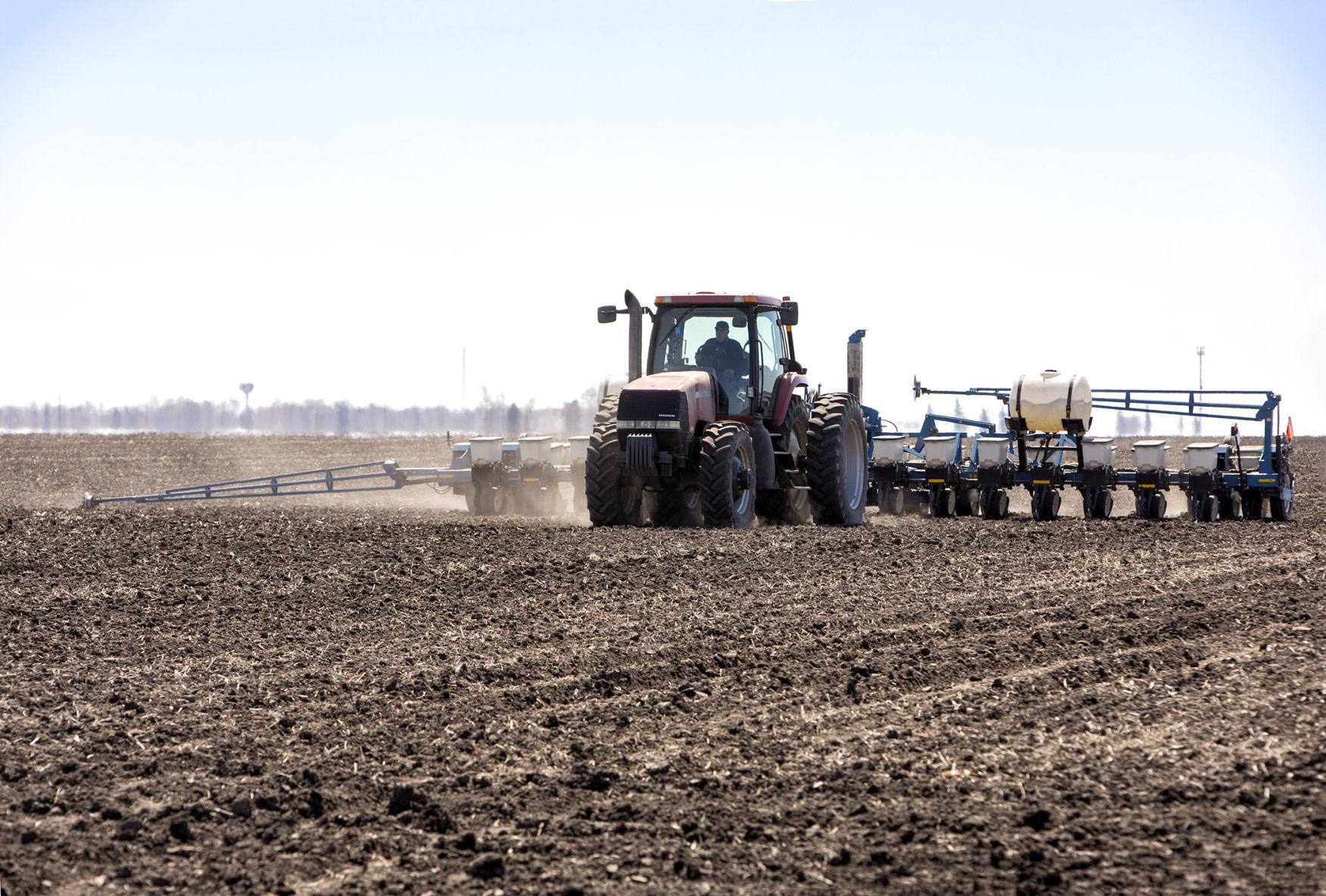 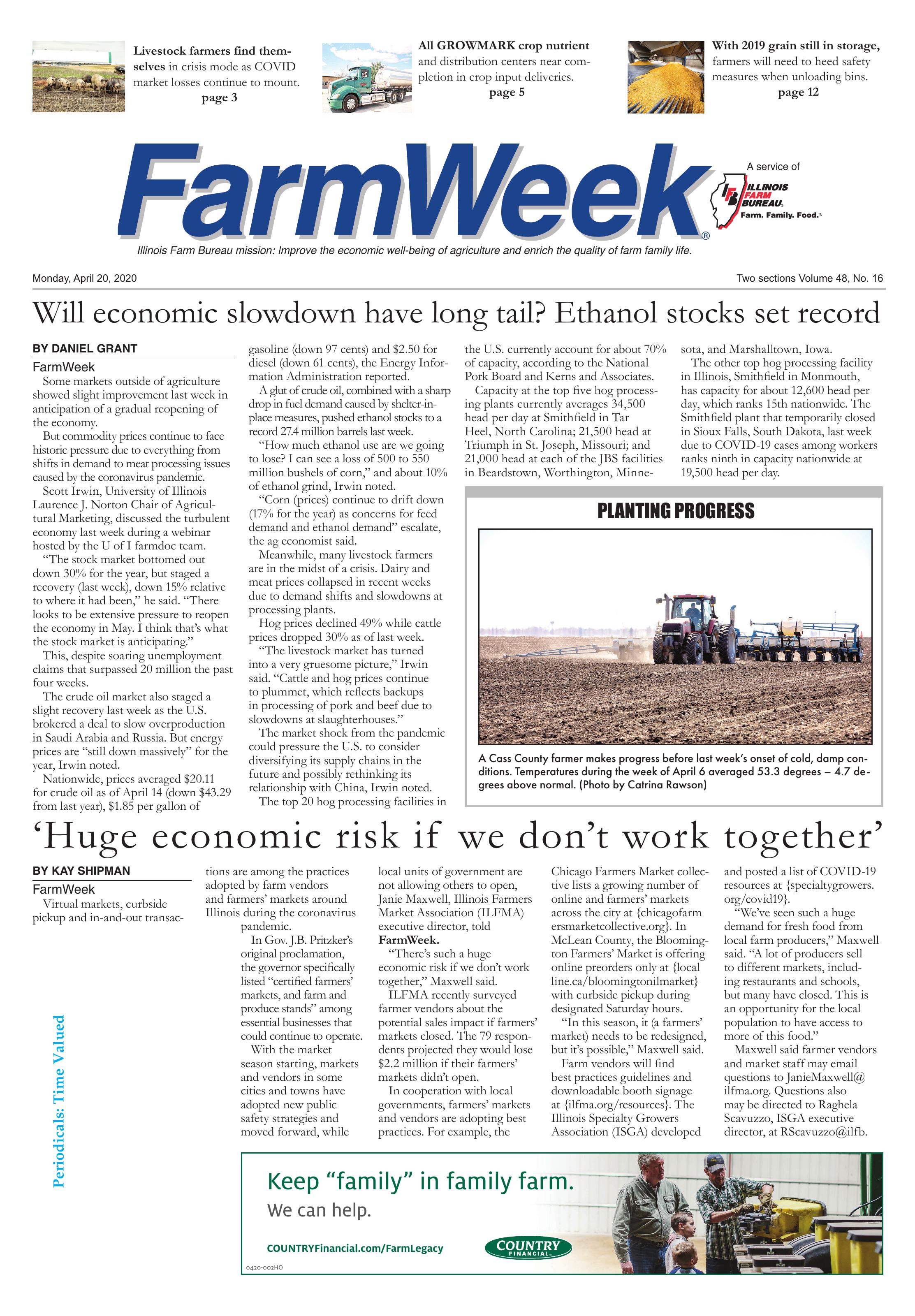