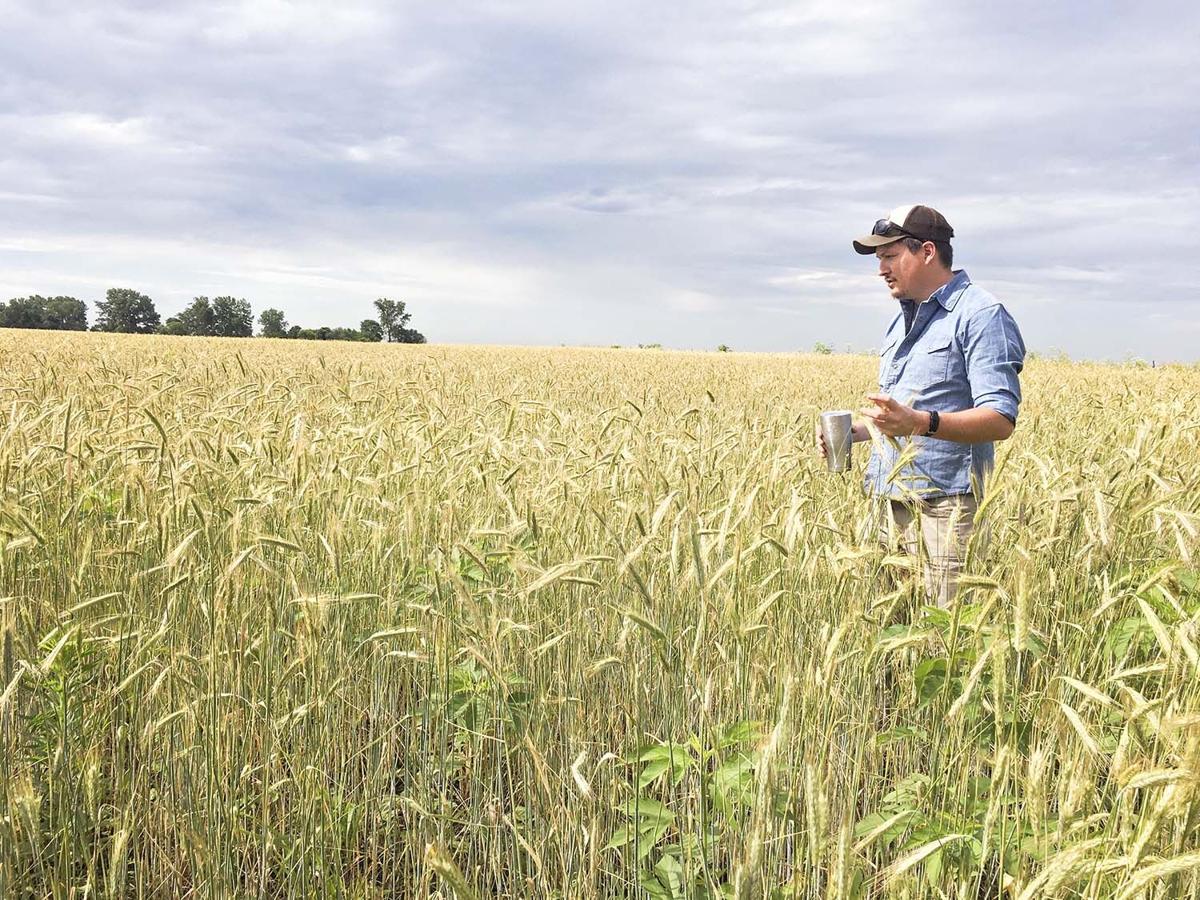 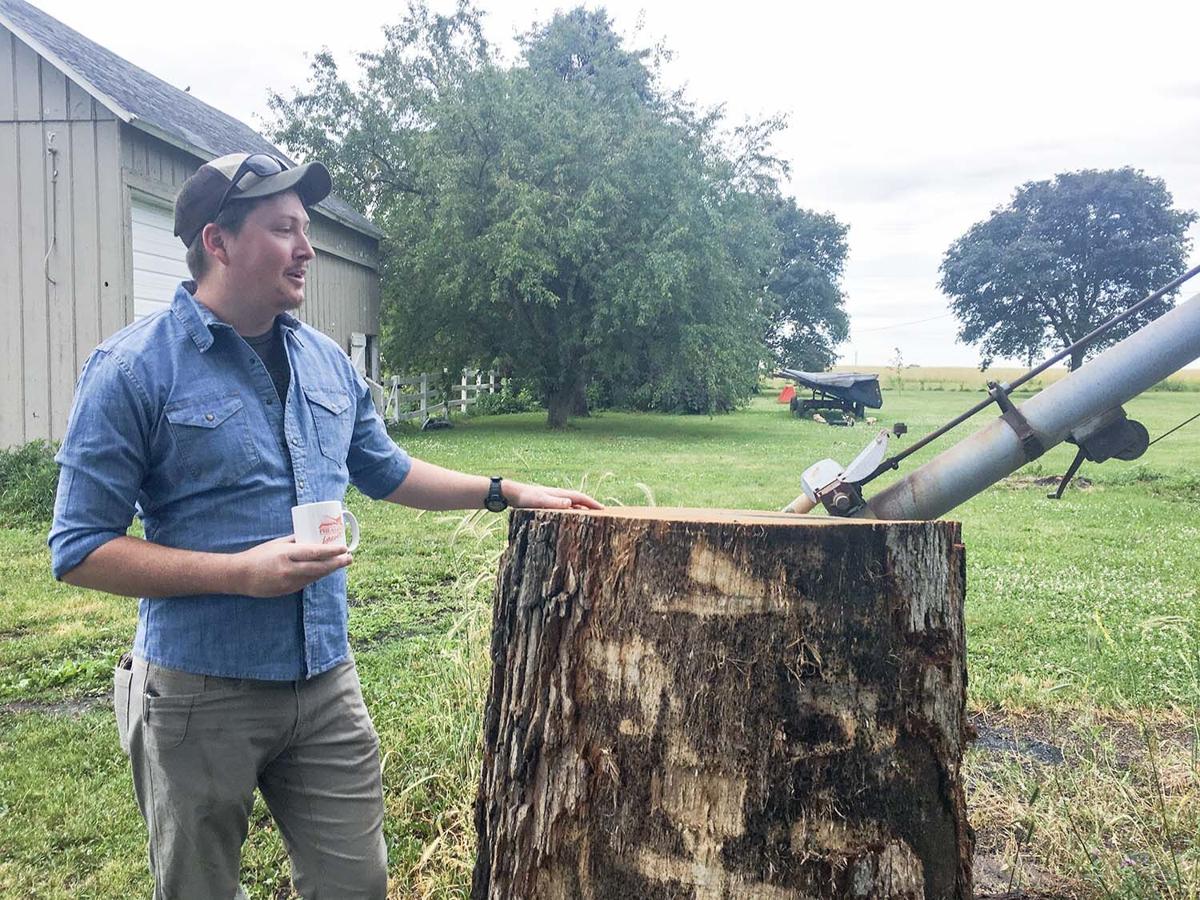 Dallas Glazik, Silver Tree Beer and Spirits CEO, discusses his plans to make a whiskey barrel from a 160-year-old oak log brought down in an ice storm. While aging for years in oak barrels, whiskey gets all of its color and 50% to 80% of its flavor from the wood, according to Glazik. (Photo by Kay Shipman)

Dallas Glazik, Silver Tree Beer and Spirits CEO, discusses his plans to make a whiskey barrel from a 160-year-old oak log brought down in an ice storm. While aging for years in oak barrels, whiskey gets all of its color and 50% to 80% of its flavor from the wood, according to Glazik. (Photo by Kay Shipman)

Whiskey from Silver Tree Beer & Spirits will be complex and unique just like the field-to-bottle venture that creates it.

Stand beside 240- and 160-year-old oak logs destined for whiskey barrels and hear Dallas Glazik, the company’s CEO, reflect on a fledgling distillery as a long-term investment. Company founders and brothers, Dallas, Will and Clayton Glazik grow heirloom corn along with a variety of crops on the family’s certified organic farm near Paxton.

Now the fifth generation, the Glaziks are embarking on a craft distillery venture, planning for a full distillery operation in Paxton within two years and a future on-farm distillery and tasting room.

Distillery farm taking a shot at protecting the environment

“We like having our hands in every step of the process,” said Dallas, a Ford-Iroquois Farm Bureau member.

Those steps include creating staves from rescued ancient Illinois oaks felled in ice storms and transforming them into whiskey barrels that will give Silver Tree whiskey 100% of its color and 50% to 80% of its flavor. The young CEO estimated he’ll need at least 13 years for aged whiskey for the market comes from the ancient-oak barrels.

Into those unique barrels will go craft whiskey made with heirloom grain that will age for four to five years before bottling. This year, the brothers are testing five heirloom corn varieties for potential star ingredients. As a processing project, University of Illinois Integrated Bioprocessing Research Laboratory scientists are finishing analyses of distilled product made from the Glaziks’ heirloom corn and yellow dent corn. On June 25, the U of I scientists and a tasting panel sampled and assessed the unaged, white spirits.

Along with heirloom corn, the Glaziks also grow 40 acres of organic bloody butcher corn that they use to make Silver Tree spirits and to sell to two distilleries in Chicago and a third one in Michigan. Since 2017, the brothers have contracted with another Illinois farm distillery to produce their Down East Vodka.

When the contract distillery got different equipment, the Glaziks bought the still used to make their vodka. “Every still has a little different flavor,” Dallas noted.

The Glaziks’ small grain crops include six-row barley, which is favored by distillers because of its higher yields. Because that barley can be planted during the winter, it reduces spring planting pressure for their other crops.

The brothers can thank their father, Jeff, for another factor working in their favor. The Glaziks’ wheat has lower protein content, which turns out to be better for distilling. That evolved over 17 years as their father selected the public wheat varieties that did better in harsh conditions. While selecting for those varieties, Jeff also unknowingly lowered the protein content.

One bottle of vodka can be produced from 3.2 pounds of lower-protein wheat instead of requiring 4 pounds of higher-protein wheat. “We get higher (alcohol) yields because of the lower protein wheat,” Dallas said. With a chuckle, he added their father “was preparing us for a life of making alcohol.”

Each of the brothers also has off-the-farm jobs while fulfilling their Silver Tree company roles. Will, an agronomist, is director of sales. Visit, silvertreebeerspirits.com, or spirithub.com for Silver Tree product locations.

Clayton, a graphic artist, is pursuing a master’s degree in distilled spirits industry. He also helped create the company’s Celtic tree logo with a nod toward their Irish roots and their own roots that ground them.

A Pheasants Forever biologist, Dallas is learning to become a cooper and craft the company’s special barrels. “I have a lifelong goal to plant a tree, cooper it, raise the whiskey and drink it,” he said. “I’ll be 93 to 98 years old, depending on how fast the tree grows.”

U of I science behind distilling

A University of Illinois processing lab worked with distilled spirits as a value-added farm product.