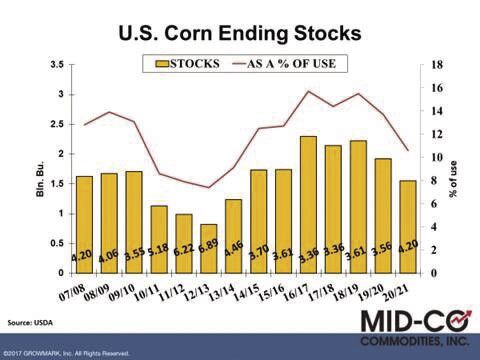 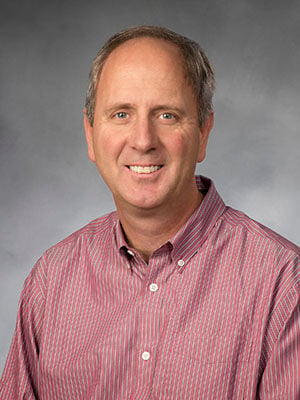 The year 2020 began with little fanfare as corn and soybean ending stocks-to-use ratios in the U.S. and world were adequate, with U.S. corn and soybeans at 13.4% and 11.9%, respectively. This is because additional corn and soybean acres were expected in the U.S. in the spring, South American weather was uneventful, and China hadn’t seemingly been keeping up with trade agreements.

COVID-19 had yet to become an all-encompassing story, but when it did, it hit hard in mid-March and futures prices suffered accordingly. The May supply/demand (S&D) 2020-21 report pegged corn ending stocks at 3.3 billion bushels, soybean ending stocks at 405 million bushels, and stocks-to-use ratios for the 2020-21 crop at 22.3% for corn and 9.4% for beans, with the average farm price for corn at $3.20 and beans at $8.20.

Then, the growing season in the U.S. turned out less than ideal (among other things, we became reacquainted with the word derecho), and China finally kicked in and started buying U.S. corn and soybeans.

From the May S&D to the recent January S&D, corn harvested acres fell 7.1 million, yield declined 6.5 bushels per acre, production dropped 1.8 billion bushels, ending stocks fell the same, and the stocks-to-use ratio now sits at 10.6% with the average farm price at $4.20.

On the world stage, from the May S&D to January S&D, corn ending stocks have fallen 2.2 billion bushels and soybeans have dropped 500 million bushels.

South American weather has recently started to improve, and while there are concerns over final production for both Brazil and Argentine corn and bean production due to dry weather, USDA holds them steady currently. In the span of nine months, though, we have taken the buffer of adequate ending stocks in the U.S. and the world off the table, and now need good production in both South and North America moving forward to hold these ratios steady.

The charts reflect the stocks-to-use ratios for corn and soybeans in the U.S., and show tightening ratios during the past few years. If these ratios remain steady to possibly tightening further, and current projections for 2021 lean this way, there is fundamental support for corn and soybean prices. Still, stay in contact with your local elevator merchandiser to keep abreast of market dynamics and pricing opportunities.