An 18-member class of agriculture, industry and housing organizations filed a federal lawsuit Thursday questioning the legality of the Biden administration’s final “waters of the United States” (WOTUS) rule.

It names the U.S. Environmental Protection Agency (EPA) and U.S. Army Corps of Engineers as defendants. A spokesperson for the Corps directed all inquiries to an EPA spokesman, who told FarmWeek “as this is pending litigation, we have nothing to add.” 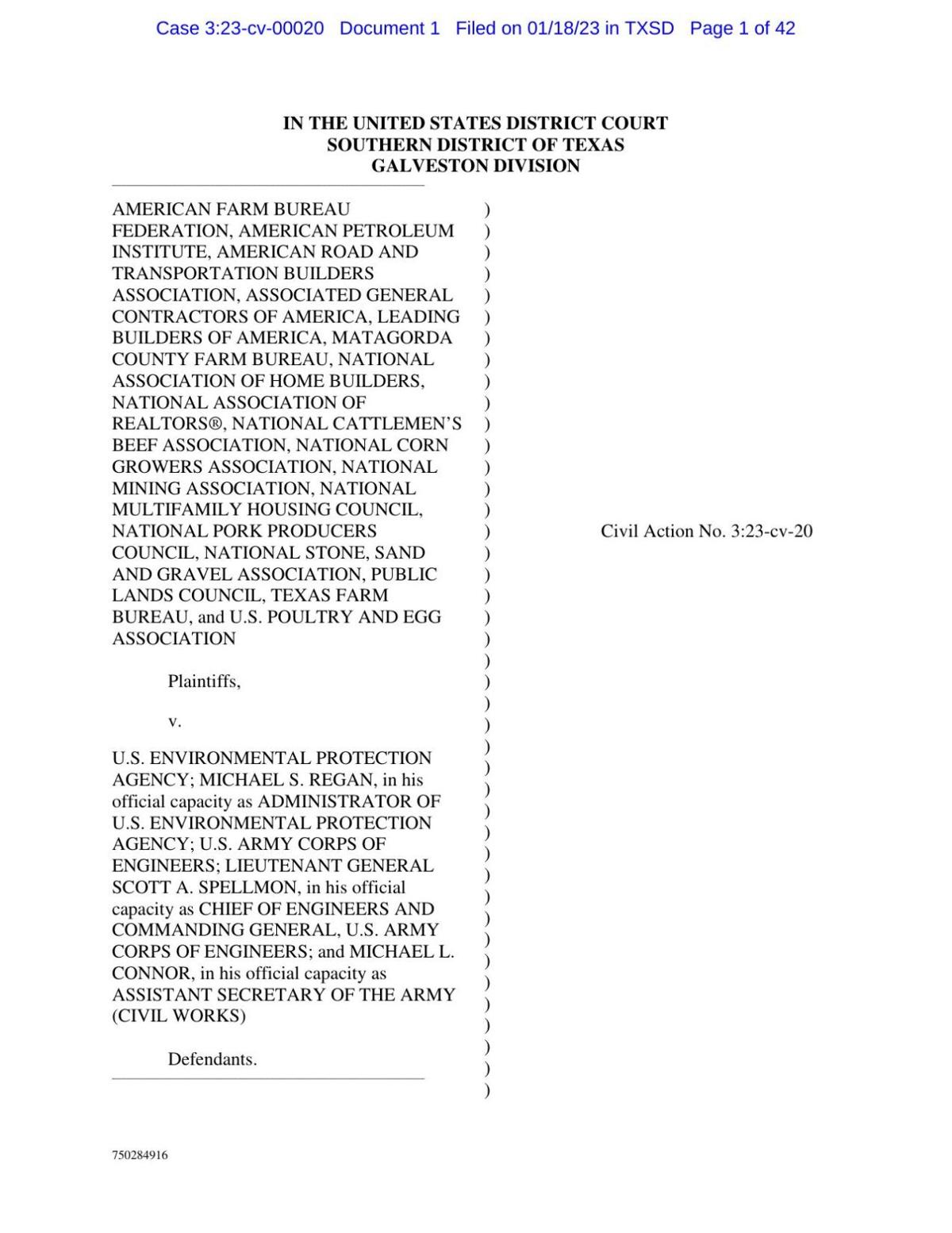 Filed in the U.S. District Court for the Southern District of Texas in Galveston, the 42-page legal challenge comes a day after the rule was formally published in the Federal Register and on the heels of a similar lawsuit filed by the state of Texas. Without legal intervention, the rule will go into effect March 19.

Meanwhile, the U.S. Supreme Court is expected to issue a decision this spring in a case that could further expand or limit the WOTUS definition.

Anticipating that the high court’s ruling could drop after the March enactment date, or be too narrow, the suit filed Thursday asks the federal court in Texas to strike the rule altogether and order the agencies not to implement it.

“We believe a judge will recognize these regulations exceed the scope of the Clean Water Act, and direct EPA to develop rules that enable farmers to protect natural resources while ensuring they can continue stocking America’s pantries,” AFBF President Zippy Duvall said in a statement.

The 514-page rule is the regulation’s third iteration in seven years. The Biden administration proposed its version in November 2021 after the Trump administration in 2020 implemented the Navigable Waters Protection Rule (NWPR), replacing a rule issued in 2015 by the Obama administration.

The filing contends the language finalized by EPA and the Corps in December violates the Administrative Procedure Act because it adopts “an unworkable definition of WOTUS” that conflicts with terms of the Clean Water Act, the U.S. Constitution and Supreme Court precedent.

More specifically, the suit argues that the agencies are attempting to expand their jurisdiction beyond what’s allowed under the CWA to “a staggering range of dry land and water features — whether large or small; permanent, intermittent, or ephemeral; flowing or stagnant; natural or manmade; interstate or intrastate; and no matter how remote from or lacking in a physical connection to actual navigable waters.”

And it details the “impossible — and unpredictable — burdens” that the “sweeping and unwieldy regulation” would have on farmers, ranchers and landowners.

Farmers would be required to conduct “time-consuming, costly and unpredictable case-by-case determinations” on not just their own land “but also vast expanses of land beyond their own holdings, using multiple vaguely defined connections to potentially remote features, in an effort to determine if their land is regulated under the CWA,” the suit states.

“This new rule creates regulatory uncertainty for what is considered ‘navigable waters’ on farmers’ private land,” Illinois Farm Bureau President Richard Guebert Jr. said. “Farmers are dedicated to protecting our natural resources and waterways, but they shouldn’t need a team of experts and lawyers to do so.”

The final rule released preserves exemptions for agriculture but also narrows an exclusion.