In a letter sent to EPA Administrator Michael Regan, the GOP legislators took issue with the agency's decision this summer to revoke all food tolerances of chlorpyrifos and with new biological evaluations that suggest glyphosate, atrazine and simazine could "adversely affect" endangered species.

The coalition also hinted it would push back against upcoming additional regulations on other herbicides, like dicamba, which EPA is considering potential changes to its use.

"As fundamental as our request for your assurances may seem, it is unfortunately necessary due to EPA’s concerning trend of disregarding scientifically-sound, risk-based regulatory processes," the group wrote.

An EPA spokesperson did not immediately respond to a request for comment. 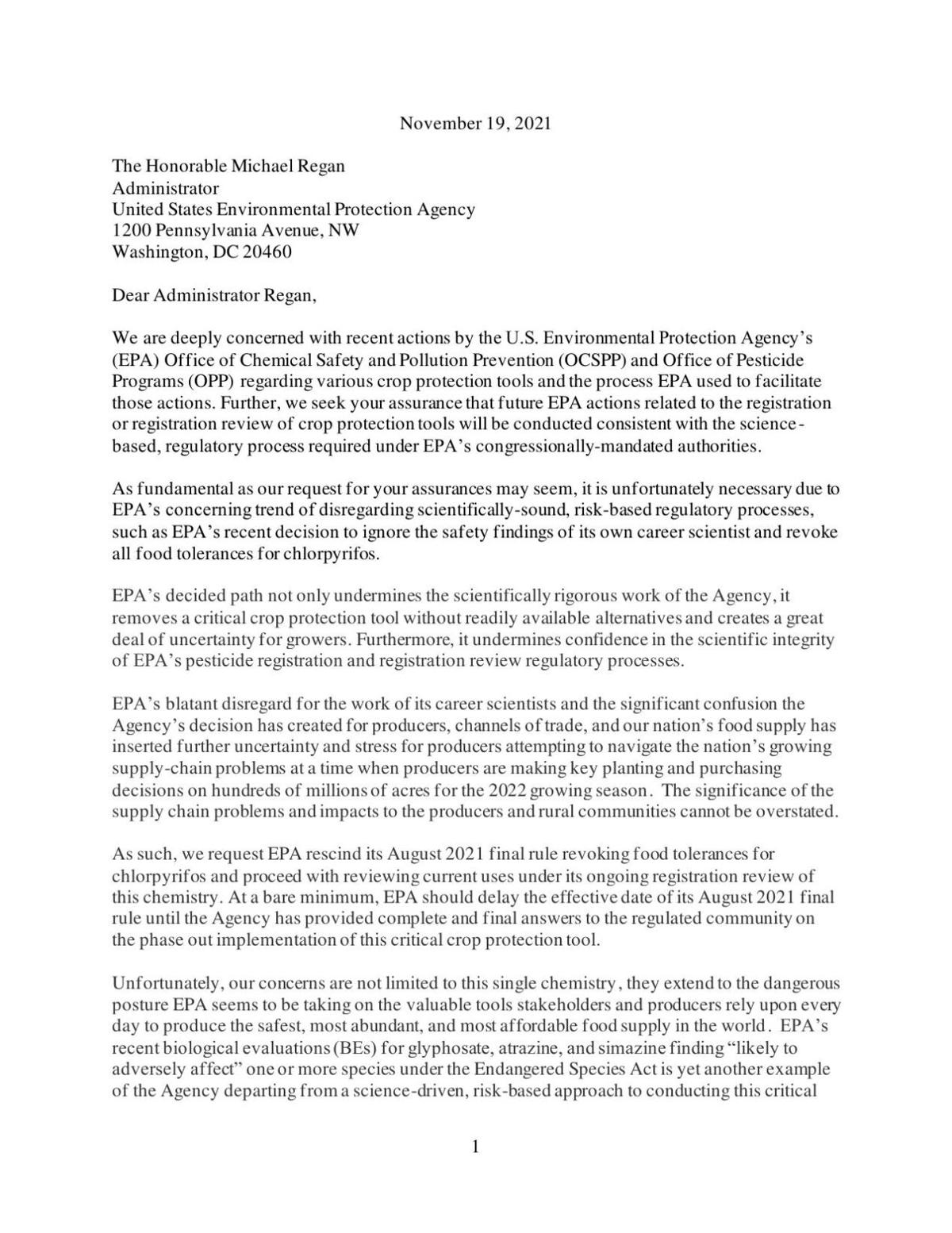 It largely focused on EPA's Aug. 30 decision to revoke all food tolerances of chlorpyrifos, an insecticide applied since 1965 that has been linked to negative neurological health effects on infants and children.

The rule, which is set to be implemented in February 2022, has drawn resistance from the agricultural industry. More than 80 agriculture groups, including American Farm Bureau Federation and Illinois Farm Bureau, filed a formal objection in October.

The agency's decision to "ignore the safety findings of its own career scientist" and ban chlorpyrifos, "not only undermines the scientifically rigorous work of the Agency, it removes a critical crop protection tool without readily available alternatives and creates a great deal of uncertainty for growers," the Republicans wrote.

The legislators asked Regan to rescind the final rule or at least delay its implementation "until the Agency has provided complete and final answers to the regulated community on the phase out implementation of this critical crop protection tool."

The letter also addresses biological evaluations released by EPA on Nov. 12  for three herbicides — glyphosate, atrazine, and simazine — used to control grasses and broadleaf weeds, that found they are "likely to adversely affect" federally-designated endangered species.

The legislators said the BEs are "yet another example of the Agency departing from a science-driven, risk-based approach to conducting this critical work and instead, embracing a 'precautionary principal' approach to the Agency’s work."

The letter comes as EPA is poised to announce potential regulatory action on three dicamba herbicides used over the top of dicamba-tolerant soybeans and cotton.

Despite those herbicides receiving five-year registration in Oct. 2020 by Trump-era EPA officials, Biden administration EPA officials have said the agency is concerned with continued reports of off-target dicamba crop injuries and may release changes to those registrations.

"Equally alarming are current industry reports of EPA political officials signaling future harmful actions relating to various herbicides and other crop protection tools," the group wrote. "If accurate, these reports indicate another EPA end-run around its own scientific and regulatory process contrary to the Agency’s congressionally-mandated, science-driven, and risk-based registration or registration review process."

The groups said the rule would cuase "significant and immediate economic and environmental damage."