Pressure continues to build on the Biden administration to mainstream the use of biofuels amid the U.S. ban on Russian energy imports.

A bipartisan group of 29 House members sent a letter to the White House Thursday calling for the U.S. Environmental Protection Agency (EPA) to permanently reinstate year-round E15 blending and sales, and to reverse proposed cuts to volume standards under the Renewable Fuel Standard (RFS).

“Taken together, these actions would significantly increase U.S. energy independence, lower prices at the pump and ensure the continued success of our sanctions on the Russian economy,” the lawmakers said. “Ethanol, biodiesel and renewable diesel add to the nation’s fuel supply, lowering prices at the pump for nearly every consumer good that moves along the supply chain.” 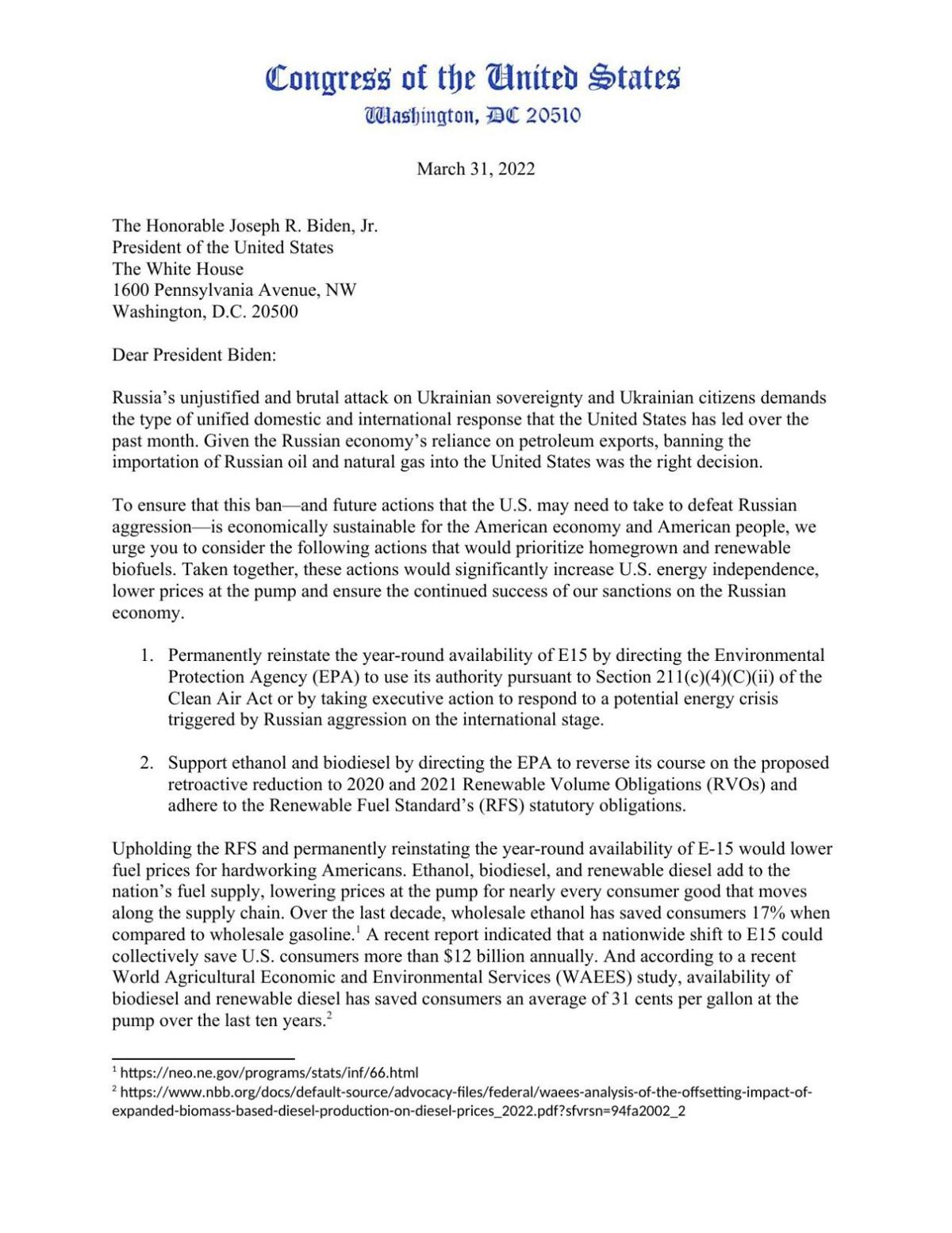 The continued push to expand domestic production of ethanol, biodiesel and renewable fuels follows a March 8 ban on Russian gas and oil imports, which has kept prices high at the pump.

As of March 31, the national average price of gas and diesel were $4.22 per gallon and $5.11 per gallon, respectively, according to the American Automobile Association.

Many elected officials from Midwestern states and farm groups have said ethanol could nearly offset the import and use of Russian oil and gas, and effectively cut prices.

And a bipartisan group of 16 U.S. senators, including Illinois Democrats Dick Durbin and Tammy Duckworth, sent a letter to EPA in early March calling for year-round E15.

But the Biden administration on Thursday unveiled a plan to boost domestic production of oil and to release an additional 180 million barrels from the Strategic Petroleum Reserve. A White House fact sheet does not mention increasing the production of biofuels.

EPA at the end of 2021 proposed cutting 2020 and 2021 corn-ethanol and biodiesel volume obligations, but raising 2022 targets, under the RFS.

Even still, the House members said those efforts aren’t enough to raise U.S. energy independence or lower fuel prices. Reversing the proposed cuts, they said, “will ensure that biodiesel can fill liquid energy deficiencies created by trade and market instability.”

The changes would also have economic benefits for American farmers, the lawmakers said.

“Because ethanol production involves U.S. farmers and processing plants located in rural communities, these benefits would be most directly felt in rural America,” the House members said.

Illinois Farm Bureau Vice President Brian Duncan echoed those calls during an interview Wednesday with Fox Business. He said U.S. farmers could supply both corn and ethanol markets, and that biofuels remain cheaper to produce and use despite surging global corn prices.

“The market’s been very volatile, but ethanol has been running about $1 per gallon cheaper for pure ethanol than gas,” Duncan said. “And so that cheapens up the price of the end product when you’re able to blend that in.”