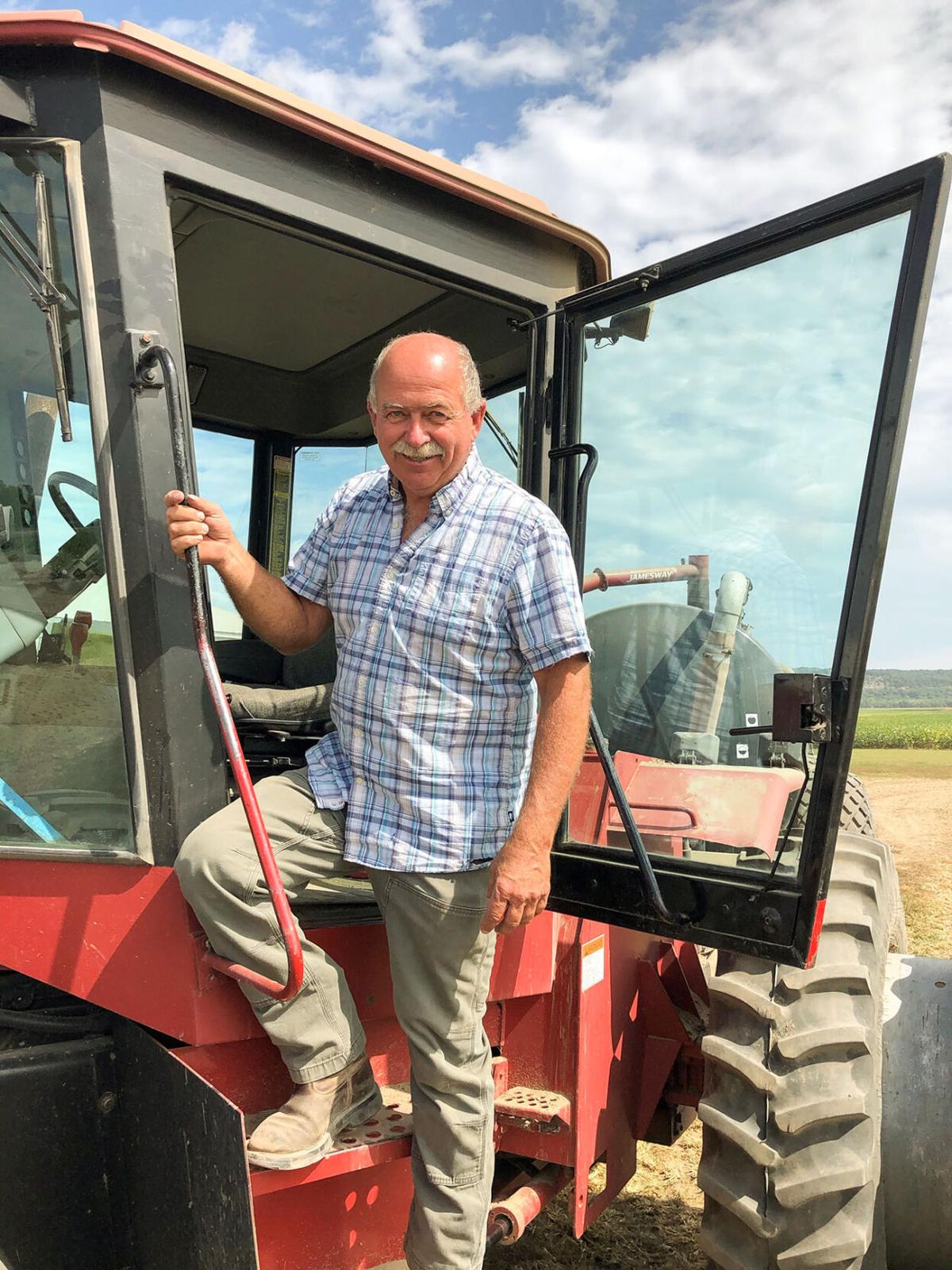 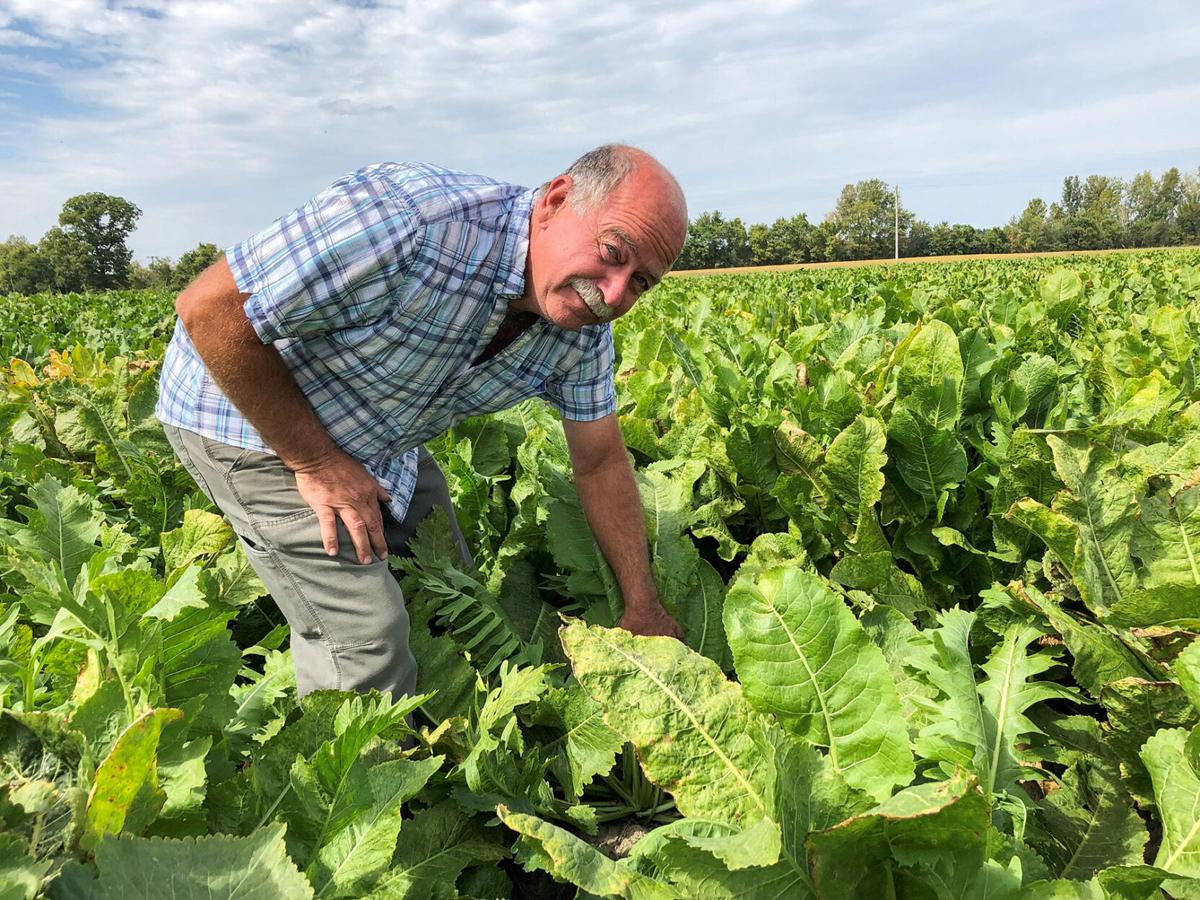 Brinkman checks on his horseradish crop, which he contracts and sells for processing in nearby Collinsville, the horseradish capital of the world.

Brinkman checks on his horseradish crop, which he contracts and sells for processing in nearby Collinsville, the horseradish capital of the world.

Bruce Brinkman, president of the Monroe County Farm Bureau, was pleased to wrap up corn harvest earlier this month.

And for good reason, besides just getting the crop in the bin. He now has a sufficient window to inject manure from his hog barn on his crop acres before shifting to soybean harvest.

The industrious farmer also grows horseradish, which will be harvested later this fall, along with wheat.

“I like to get corn (harvest) done before I start the beans,” Brinkman said from his farm office located near Valmeyer, a couple miles east of the Mississippi River. “It was all planted in early April. I started harvesting at 25% moisture and wrapped up at around 19% to 20% moisture.

“With the hog operation, I need the opportunity to haul some fertilization out to the field,” he noted. “I’m over half done hauling manure (as of Sept. 23).”

He currently serves as a hog contract finisher for KJMM Pork, which markets antibiotic-free pork. Raising antibiotic-free hogs has its challenges, including a slightly higher mortality rate, but it provides a steady market.

“One of the main reasons I went to contract finishing is to take the pressure off marketing,” Brinkman said. “I’m a base hit kind of guy. I don’t need a home run. As long as I do a good job for the contractor, we both can be successful.”

The market for antibiotic-free pork that Brinkman services is all domestic with a distribution system in place. So, he experienced no backlog of animals during the production slowdown caused by the coronavirus pandemic this past spring and summer.

Contract production also appealed to Brinkman when he was approached to grow horseradish. The crop must be continuously rotated on lighter soils, common in his area near the river, to produce the best yields and limit outbreaks of fungus.

Average horseradish yields range from 3 to 4 tons per acre up to 9 tons on virgin soil with good fertilization, Brinkman noted. He markets the crop in Collinsville, the horseradish capital of the world.

“It’s a pretty good contract and is a win-win for me,” he said of his horseradish acres. “The landlords make an extra bonus.”

Brinkman credits his work ethic and entrepreneurial spirit to his upbringing on the farm and large family. He’s the 12th of 15 siblings.

“There’s a lot of advantages to a big family,” he said. “One, you have to take responsibility for your own actions. And you can’t expect something for nothing. You have to earn it.”

He also developed a strong desire to serve his community and farm industry throughout his upbringing.

Brinkman is in his third term as Monroe County Farm Bureau president and remains actively involved with local and state pork producer associations, levy district, the Southern Illinois Flood Prevention District and serves on the board of the Upper Mississippi, Illinois and Missouri Rivers Association. He previously served on his local school board.

“You have to give back,” he said. “Success to me is more how your children turn out than what I’ve done.”

Brinkman’s wife, Rita, keeps the farm books and assists as a school teacher, her previous job. Their oldest son, Dustin, joined the farm full-time about three years ago while their daughter, Bethany, studies as a veterinarian technician and their younger son, Ryan, is studying animal science.

Farmers throughout Illinois provide a look at this year's growing season.